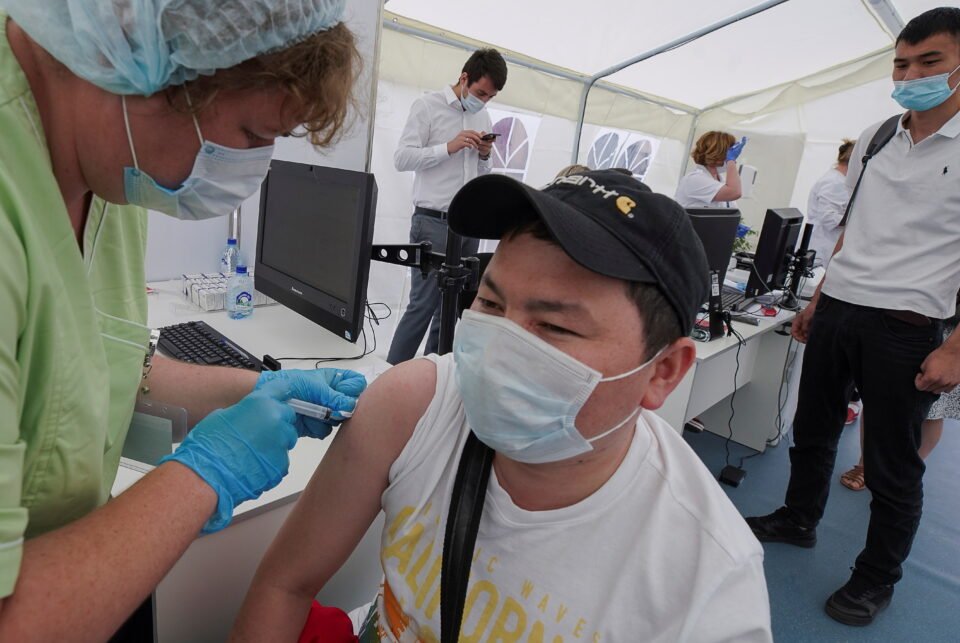 A migrant worker receives a jab while being injected with the one-dose Sputnik Light vaccine against the coronavirus disease (COVID-19) in a vaccination centre at a city market in Moscow, Russia, June 30, 2021. REUTERS/Tatyana Makeyeva

Russia reported 672 coronavirus-related deaths on Thursday, the highest official death toll in a single day since the pandemic began.

Russia has inoculated just 16% of its population since launching its vaccination programme in January, in part driven by widespread distrust even as the country developed its own vaccines.

The health ministry said it would be pursuing “emergency” vaccination and recommending booster doses for vaccinated people every six months until at least 60% of the adult population is vaccinated.

Initially the authorities had planned to reach this target by autumn, but on Tuesday the Kremlin said it would not be met.

Moscow Mayor Sergei Sobyanin said revaccination was available with any of Russia’s four registered vaccines, but that the flagship Sputnik V and the one-component Sputnik-Light would initially be used at eight clinics across the city.

Scientists behind the Sputnik V shot have previously said that protection generated by the shot lasts much longer than six months, maintained by memory cells that stand ready to rapidly generate antibodies when encountering the virus.

However, scientists have recommended booster doses to keep the number of protective antibodies in the body at a high level considering the rapid spread of the Delta variant.

“We need to keep an eye on the strain, keeping antibody levels high through more frequent re-vaccination,” said Alexander Gintsburg, director of the Gamaleya Institute which developed the vaccine.

“This is because memory cells are late to get to work … they start to build up the right level of antibodies around the third or fourth day,” he was cited as saying by the Interfax news agency last week.