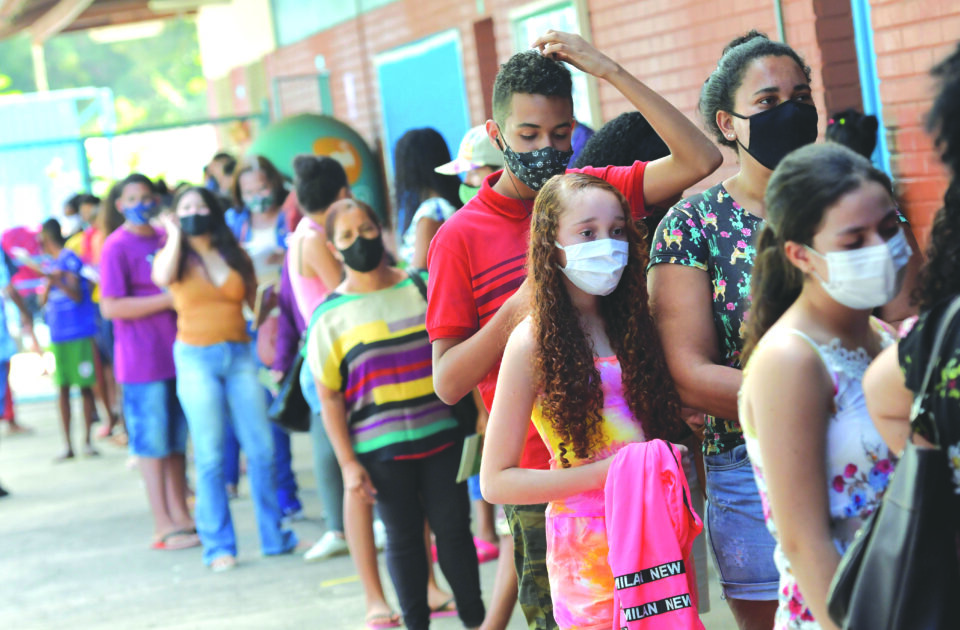 Students wait to receive a dose of the Pfizer-BioNTech vaccine against the coronavirus disease (COVID-19) during a vaccination event for teenagers at Barao do Rio Branco public school in Betim, Minas Gerais state, Brazil

Europe’s drug regulator has found a possible link between very rare heart inflammation and COVID-19 vaccines from Pfizer-BioNTech and Moderna, it said on Friday, stressing that the benefits of the shots outweighed any risks.

The conditions, myocarditis and pericarditis, must be listed as side-effects of the two mRNA vaccines, the safety committee of the European Medicines Agency (EMA) said, adding that such cases primarily occurred within 14 days of inoculation.

It said cases occurred more often after the second dose and in younger adult men. This is in line with U.S. findings last month.

Symptoms from the conditions include breathlessness, palpitations and chest pain.

EMA’s safety panel also advised that people with a history of the rare blood disorder capillary leak syndrome (CLS), must not be vaccinated with Johnson & Johnson’s shot.

While the regulator cautioned healthcare professionals and people to be on the lookout for post-vaccine symptoms, it said it was continuously monitoring the safety of approved vaccines as they are rolled out more widely.

“EMA confirms that the benefits of all authorised COVID-19 vaccines continue to outweigh their risks,” it said.

EMA in total reviewed more than 300 cases of myocarditis and pericarditis in the European Union, Iceland, Norway and Liechtenstein – together referred to as the European Economic Area (EEA).

The cases of myocarditis and pericarditis were “generally mild,” and individuals “tend to recover within a short time following standard treatment and rest,” Pfizer said in a statement.

EMA had also been looking into such cases with J&J and AstraZeneca vaccines, but on Friday said it had not found any causal relationship so far and had asked for more data from the drugmakers.

Both J&J and AstraZeneca vaccines use similar technology but with different versions of a cold virus to deliver immunity-building instructions to the body.

EMA in June asked CLS to be added as a side-effect of AstraZeneca’s shot, Vaxzevria.

The regulator then too said people who had previously sustained the condition, in which fluids leak from the smallest blood vessels causing swelling and a drop in blood pressure, should not receive the shot.

For J&J, EMA reviewed three cases of CLS which occurred within two days of vaccination.

The developments could put pressure on vaccination plans in Europe and on the U.S. company after millions of doses of the vaccine were banned for EU use over safety concerns following a contamination incident in the United States.

J&J did not immediately respond to a request for comment.

Despite pandemic, exports hold their own