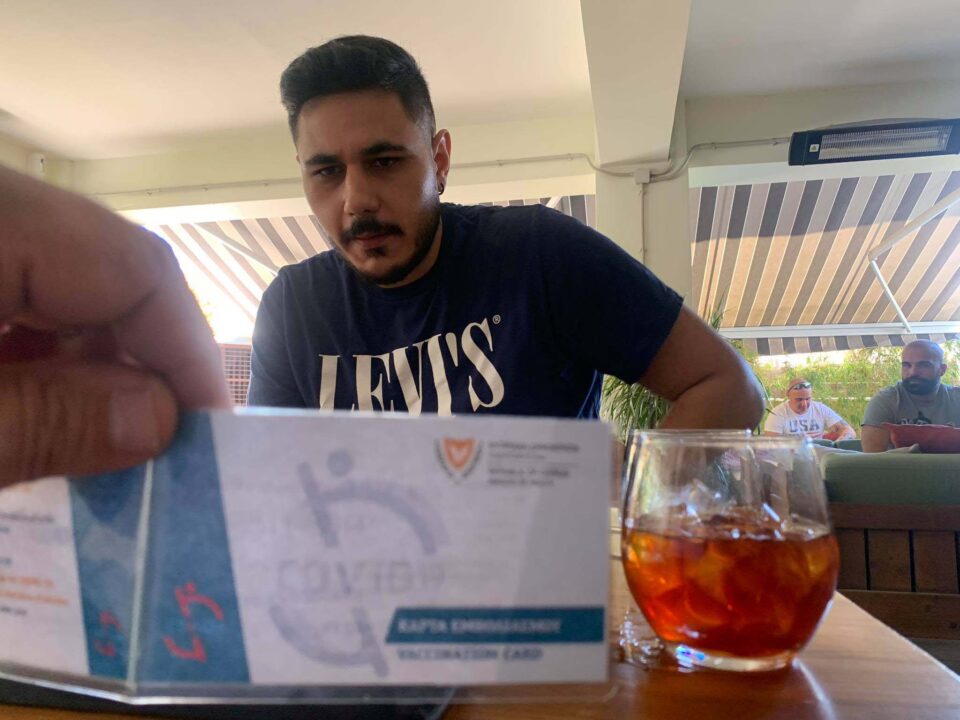 The fallout from the latest SafePass requirements continued on Friday with the divide proving particularly noxious ahead of the weekend.

The council of ministers this week decided that businesses will be required to ask and see proof of a customer’s SafePass.

Businesses are saying the imposition is unfeasible and there are further concerns over a deepening divide within society.

Various businesses took to social media to state their stance on the issue.

“I declare responsibly that [name omitted] will not take part in their game of separating people, people now have knowledge and logic and know what to do with their life, we will not ask any documents from anyone,” a Larnaca based business said.

Another, based in Nicosia, said that: “[Name omitted] informs that we will not ask any of our customers to show us absolutely any paper. Everyone’s personal information is personal. We respect all our customers.”

Many businesses posted on their online platforms that they will only accept customers with proof of their SafePass.

Elsewhere, the move was praised by many who say it is a step in the right direction to help reduce a consistently increasing daily caseload.

The government’s updated policy is a significant shift from previously requiring customers to have a SafePass and only being obliged to show it to the police, or select officials employed by the government, if asked.

But Fanos Leventis, of the Pancyprian Association of Owners of Recreation Centres (Pasika), told the Cyprus Mail on Friday that the government had essentially managed burgeon its ranks with extra police officers for free.

“The industry is against this, the business owners are suddenly being placed with a huge responsibility,” he said.

“Many businesses are saying they just want to be able to get on with their usual work and not be forced to take on the role of the state,” Leventis added.

“But us, as an organisation, we cannot tell people not to obey the decree, they should follow the rules until something better comes up,” he said.

Some others in the industry, in this case mainly nightclubs, have praised the beefed-up SafePass requirement.

President of the Pancyprian association of entertainment centres (Pasyked) Nicos Vassiliou, previously told the Cyprus Mail that he favours the move.

But how does it work in practice?

Leventis explained that business owners are legally required to ask customers whether they have a SafePass and must also see it.

“If the police come in and check a table and see that there are customers without a SafePass, then both the customers and the owner [of the business] will be fined,” he said.

Questions have been raised as to the feasibility aspect of the measures, with many pointing to the open-air, sprawling cafes seen in most city centres.

“So, if a group of four people come to my café and I check their credentials, then half an hour later one of their friends join the table but the police turn up – what then? I’m fined? Just let me get on with my job,” the manager of a popular café in central Nicosia told the Cyprus Mail.

Another business wrote: “We are in no case denying the virus, we are not against vaccines but neither are we police officers to be carrying out checks and neither do we accept to constantly ping-pong between opening and closing.”

Others however have likened the SafePass to any other government mandated identification required to access certain goods or services – such as buying cigarettes at kiosks or entry into nightclubs serving alcohol.

In such cases, they argue, it is normal and expected of members of staff to ask customers for proof that they are eligible to buy alcohol.

But what about unruly and uncompliant persons?

“If they have a customer who refuses to comply, does not show their SafePass nor will they leave, then the owner should make a note,” Leventis said. “For example, ‘table 12 – I asked for a SafePass but they refused and would not leave and there was nothing more I could do’,” he added.

In that case would it not also be up to the owner to call the police?

“Well how many police calls are going to be made? I don’t see how that’s feasible, it is however each owners’ right to call the police,” Leventis said.

The government announced on Thursday that a CovPass mobile app will be ‘coming soon’ and will facilitate the SafePass.

Our View: Lines are being drawn in the sand due to SafePass

Next steps for Cyprus on minimum corporate tax