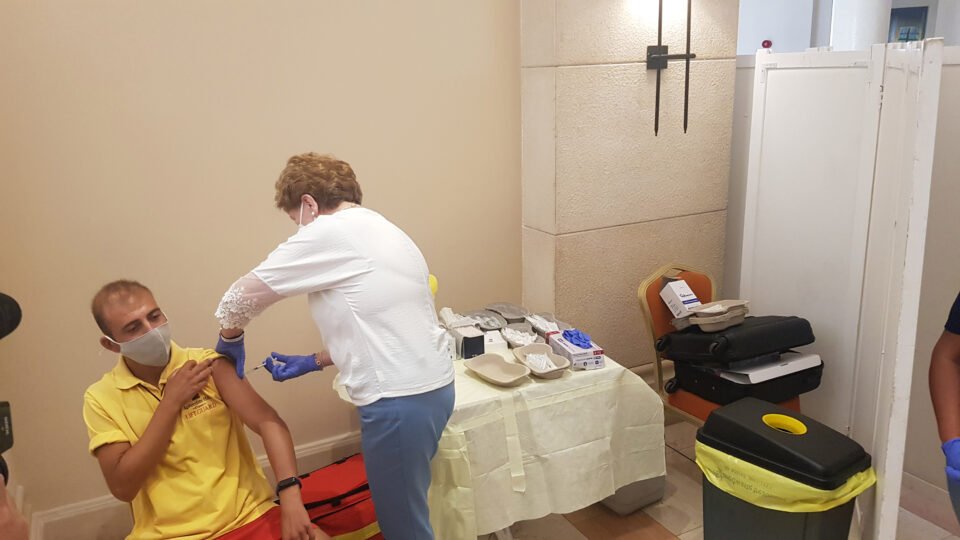 The vaccination of hotel staff sends a positive message to tourists that hotels in Cyprus are safe, Health Minister Michalis Hadjipantelas said on Saturday as the government’s new target is to raise the vaccination coverage to 70 per cent in just two weeks.

Hadjipantelas, along with the ministry’s permanent secretary, Christina Yiannaki, visited the Aphrodite Hills resort in Paphos, on the first day of vaccinations of hotel employees by mobile units.

In total 90 employees were vaccinated on Saturday as part of an initiative by hotels’ association Pasyxe, to facilitate staff by inviting mobile units to administer the jabs.

So far around 1,500 employees in 107 hotels in all districts have expressed interest.

The minister said this was an important day for the struggle against coronavirus. The goal, he said, is to have mobile vaccination units throughout Cyprus, to give an opportunity to everyone, who, for various reasons cannot visit the vaccination centres.

“We will make it, by faithfully following the experts’ instructions, with respect for each other,” the minister said.

He said it was important that tourists know that Cypriot hotels were shielded and that staff were vaccinated in order to send the message that hotels are safe, and that they could enjoy their holidays without any problems.

According to Hadjipantelas the health ministry launched a campaign last week to boost vaccinations, which, he said, is starting to pay off since more than 17,000 appointments were booked in the past few days.

Yiannaki said almost 66.5 per cent of the population was vaccinated with at least the first dose and the goal now was to reach 70 per cent within two weeks by means of the carrot and stick campaign.

Pointing out that patients at the coronavirus reference hospital were unvaccinated or have received only the first dose, Yiannaki urged people to get vaccinated “in the best interest of public health.”

Vaccination through mobile units of the hotel employees, around 50 per cent of whom are unvaccinated, was arranged on Pasyxe’s initiative after staff cited among the reasons of them not getting the jab so far, concerns over delays at the vaccination centres which would mean disrupting their work.

Pasyxe assessed that through this initiative, the numbers of unvaccinated hotel staff will drop to 20 or 30 per cent.