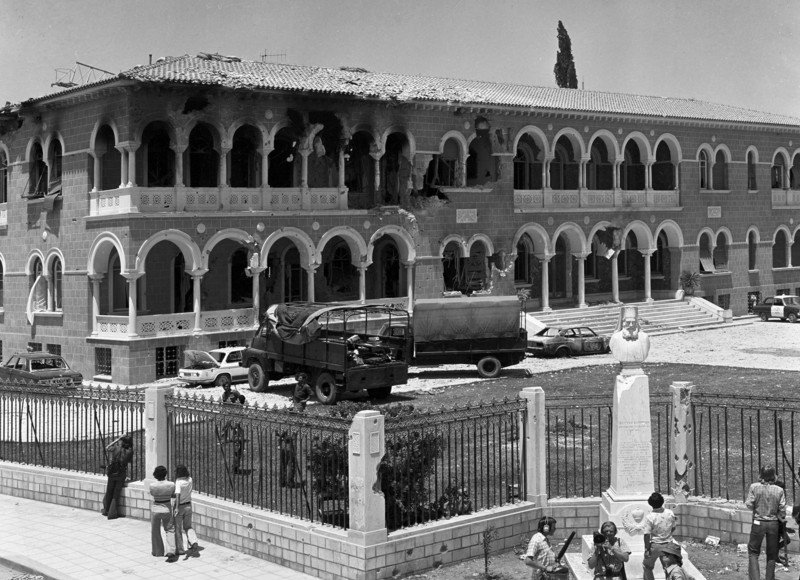 THE WAY THINGS ARE (AND WERE)

Nicosia, July 1972: my husband kissed his family goodbye and left for an army training camp. After his service, he found a good job in Famagusta; we planned to move there by the end of July 1974. On Sunday July 14 we took his parents to a popular beach in Kyrenia, a happy day. Yiayia was content to tickle her feet at the water’s edge; Papou wanted to swim, creating great hilarity because he had not swum for years. Surely, we teased him, something strange would happen after this.

Coming home Andreas commented on the increased security force around the Kykos monastery branch in the centre of Nicosia. Tensions had been rising, cars had been bombed as pro and anti President Makarios factions asserted themselves. He had narrowly escaped being blown to pieces one night by such a bomb coming home on foot, when an explosive device went off in a parked car that would have killed or badly injured him if he had not called in to chat with his father; a few minutes that saved his life.

Monday July 15: he set off for work; the start of another summer week. Unable to leave my sleeping two-year-old daughter alone, I sent my capable son round the corner to Woolworths to get something needed for breakfast, a safe trip, no busy roads to cross, sure no harm would come to him in dear old safe Cyprus. My stomach churned to the unmistakable sound of gunfire I knew had to be coming from the police station opposite the store. My son immediately reached home safely to tell me people were fighting in the streets.

The narrow roads around the house became battlegrounds and later, we picked up stray bullets that had hissed into the garden, luckily finding no human targets. The calm world we knew changed rapidly and the future we anticipated in beautiful Famagusta was gone. Andreas was road-block stuck in Prastio until the Wednesday.

On CyBC, coup representatives were assuring the country that there would be no problems. The BBC World Service was telling the world that Turkish troops were massing at Mercin and Adana. ‘They’ll be here by Saturday.’ Andreas told me.

Saturday, July 20: Turkish troops invaded. Andreas went back into uniform and army life for several months. He called to tell me to leave Nicosia with my neighbour as it was believed the invaders were trying to encircle the capital. We bundled into her car and left for Larnaca. It was terrifying seeing the results of war as we drove, and we later learned UN soldiers had lost their lives on that road.

To our horror, uniformed men began to advance down the hills, guns at the ready. Our stomachs in a knot for the safety of our children, we had no idea which army they belonged to… until they came closer and the bedraggled state of over tired, over stressed, over worked soldiers with shaggy hair and several days stubble, some with unkempt beards, told us they were ours.

Nicosia, July 1989: it was a poignant moment to watch my son leave home to do his army service. His father hadn’t lived for this notable goodbye. Earlier that same year I had taken part once more in a Women Walk Home march. We made a three-pronged rush up the hill in Lymbia to the small church of the Holy Cross. A young Turkish soldier, totally alarmed by a horde of determined women advancing on his post, kept saying earnestly to me, ‘Please lady, go back. Please go back’ as we pushed forward. This was no fierce killer, just a youngster when the invasion took place, probably doing his service as my son would, a well brought up lad who didn’t want to hurt anyone. There were others, however, in uniform that day intent on hurting the women who had sat down in peaceful protest on the slopes.

It was in Greece that the idea of the citizens’ state gave birth to early democracy. Travelling Greeks founded colonies and the idea spread. Democracy had been unravelled in Greece, and Cyprus was caught up in the tail of that sad whirlwind leaving the island irreparably damaged.

Nicosia, July 2021: my grandson will start his army service as the fate of Varosha is uncertain for far more than just this family. I can only pray that political leaders on both sides will think twice before again sacrificing vital young men for the sake of hubris.

Coronavirus: About 65 per cent of hospitality venues now open