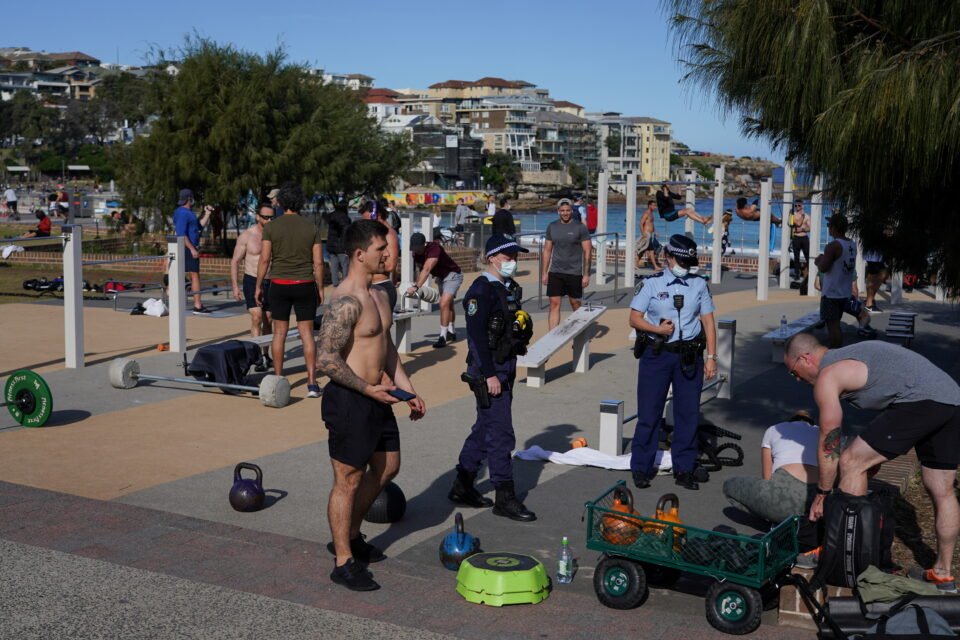 Patrolling police officers check ID information of people working out at a Bondi Beach outdoor gym area during a lockdown to curb the spread of a coronavirus disease (COVID-19) outbreak in Sydney, Australia, July 27, 2021. REUTERS/Loren Elliott

The Australian city of Sydney extended a lockdown by four weeks on Wednesday after an already protracted stay-at-home order failed to douse a COVID-19 outbreak, with the authorities warning of tougher policing to stamp out non-compliance.

Far from a planned exit from lockdown in three days, the city of 5 million people and neighbouring regional centres spanning 200 km (120 miles) of coastline were told to stay home until Aug. 28 following persistently high case numbers since a flare-up of the virulent Delta variant began last month.

The state of New South Wales, of which Sydney is the capital, reported 177 new cases for Tuesday, from 172 on Monday. That is the biggest increase since an unmasked, unvaccinated airport driver was said to have sparked the current outbreak. The state also reported the death of a woman in her 90s, the 11th death of the outbreak.

Of particular concern, at least 46 of the new cases were people active in the community before being diagnosed, raising the likelihood of transmission, said the authorities, who have cautioned that active community transmission must be near zero before relaxing the rules.

“I am as upset and frustrated as all of you that we were not able to get the case numbers we would have liked at this point in time but that is the reality,” said NSW State Premier Gladys Berejiklian at a televised news conference.

Berejiklian added that police would boost enforcement of wide-ranging social distancing rules and urged people to report suspected wrongdoing, saying “we cannot put up with people continuing to do the wrong thing because it is setting us all back”.

In one case, a mourning ceremony attended by 50 people in violation of lockdown rules resulted in 45 infections, she said.

The extension turns what was initially intended to be a “snap” lockdown of Australia’s most populous city into one of the country’s longest since the start of the pandemic, and may spark the second recession of the A$2 trillion ($1.47 trillion) national economy in two years, according to economists.

To minimise the economic impact, the NSW government said it would lift a ban on non-occupied construction in most of Sydney. However, it expanded a list of local government areas within the city where the ban would stay because of the prevalence of COVID-19 cases there.

The popularity of the federal government may suffer from the extended lockdown. Polls show slipping support for Prime Minister Scott Morrison’s government amid criticism of a slow vaccination roll-out that has been blamed on changing regulatory advice and supply shortages.

“There is no other shortcut, there is no other way through, we have to just hunker down and push through,” said Morrison during a televised news conference in the national capital Canberra. He acknowledged his own family was caught up in the Sydney lockdown.

On Wednesday, the NSW government said it was redirecting Pfizer Inc vaccine doses, which have so far been restricted to people aged 40 to 60, from relatively unaffected regional areas to final-year school students in the worst-affected Sydney neighbourhoods.

The state and federal governments also said they were expanding a relief funding package to enable affected companies to keep paying wages through the closure.

In contrast to NSW, the states of Victoria and South Australia began their first day out of shorter lockdowns that halted outbreaks there. Victoria reported eight new cases, all of them isolated throughout their infectious period, and another case still under investigation.

Queensland state reported one new case, a man who completed the country’s mandatory two weeks of hotel quarantine then tested positive nine days later. The authorities said they were trying to track down people who may have been in close contact with him, including occupants of a youth hostel where he stayed.

Australia has kept its COVID-19 numbers relatively low, with just over 33,200 cases and 921 deaths, out of a population of about 25 million, since the pandemic began, but the fast-moving Delta strain and low vaccination coverage have frustrated residents.

Meanwhile, South Korea reported 1,896 new COVID-19 cases for Tuesday, its highest-ever daily increase, as the country struggles to subdue a fourth wave of outbreaks fanned by the more contagious Delta variant of the coronavirus.

The daily tally broke a previous record set on July 22 as infections are spreading beyond the capital Seoul and its neighbouring regions where the toughest social distancing rules are in place.

There were 1,823 domestically transmitted cases on Tuesday and 33.5%, or 611, of the were from areas outside the capital regions, according to the Korea Disease Control and Prevention Agency (KDCA).

This is the first time the number of cases outside the Seoul metropolitan region has exceeded the 600 mark since the first COVID-19 wave emerged from a church in the southeastern city of Daegu.

Tighter social distancing curbs took effect across most of the country on Tuesday and will last for two weeks. Those areas will be under Level 3 curbs on a four-level scale, which will mean a 10 p.m. (1300 GMT) dining curfew and ban on gatherings of more than four people.

The tighter curbs were enacted to prevent the further spread of the coronavirus during South Korea’s peak summer holiday season.

The great Seoul area region remains under Level 4 curbs that include a ban on gatherings of more than two people after 6 p.m.