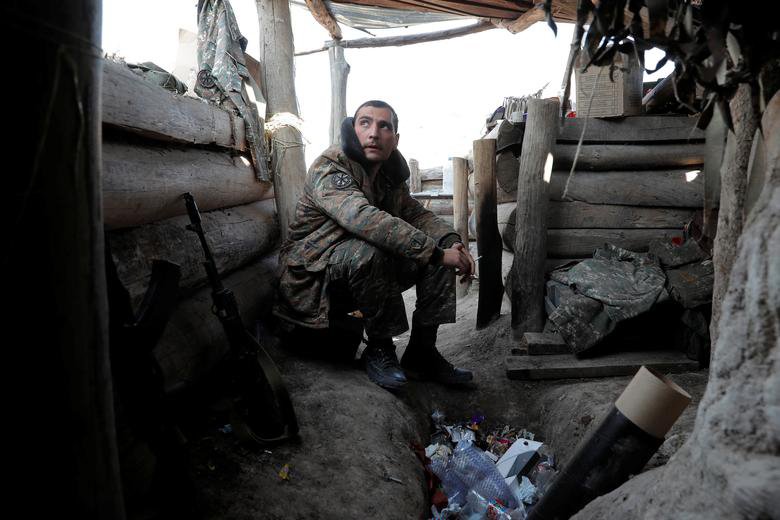 File photo: An ethnic Armenian soldier in a trench at fighting positions on the front line during a military conflict against Azerbaijan's armed forces in the breakaway region of Nagorno-Karabakh, October 20

Armenia and Azerbaijan accused each other on Thursday of flouting a Russian-backed ceasefire that both sides had accepted the previous day to halt deadly border clashes.

Armenia’s defence ministry said in a statement that Azeri troops had opened fire on Armenian positions at the Gegharkunik section of the border in the early hours of Thursday morning, prompting Armenia to return fire. It described the situation as calm as of 0700.

Azerbaijan’s defence ministry said in a statement that Armenian forces had opened fire with machine guns and grenade launchers in the direction of a village in the Kelbajar region, and had thrown hand grenades. It said its forces returned fire.

The ceasefire was called on Wednesday after one of the deadliest border incidents since last year’s six-week war between ethnic Armenian forces and Baku over the Nagorno-Karabakh region and surrounding areas.

In fighting from last September to November, Azeri troops drove ethnic Armenian forces out of swathes of territory they had controlled since the 1990s in and around the Nagorno-Karabakh region, before Russia brokered a ceasefire.

A simmering border dispute between the two has since flared up, with both sides accusing each other of separate incursions into each others’ territory in recent months, highlighting the fragility of the ceasefire.