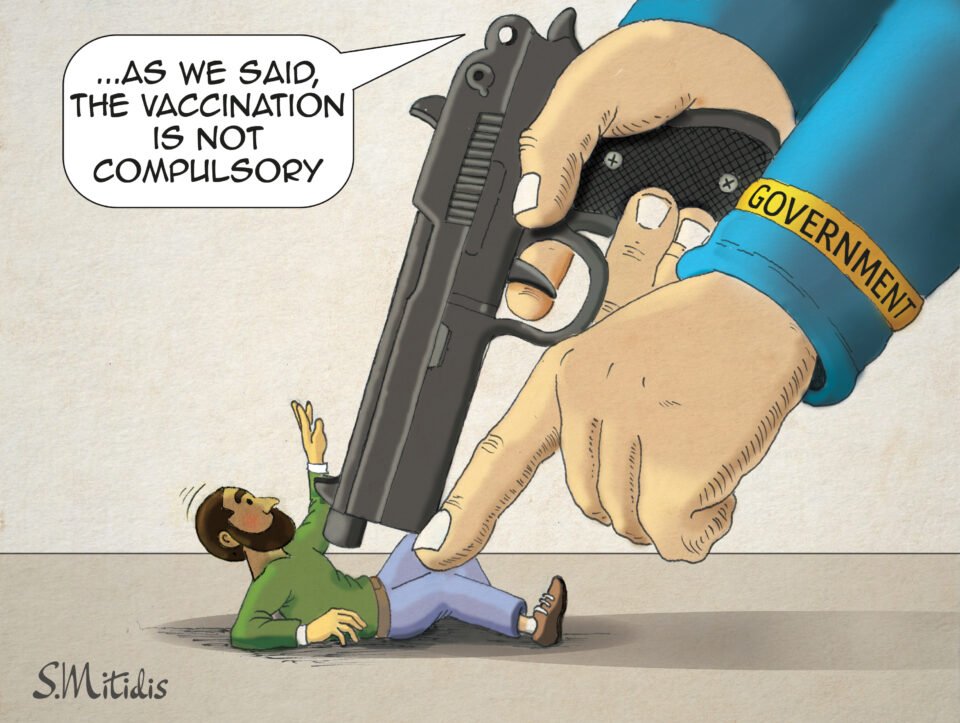 AT LEAST the streets are still SafePass-free zones, but for how much longer is anyone’s guess. For now, we will not need a safe pass to venture out on the street, the government deciding on Friday that it was enough just to restrict the number of SafePass-free zones to establishments with under 10 people, including staff.

We are still free to walk on the streets, as long as we wear a face mask. In the end, the only places you can still feel like a free individual are the beach, where no SafePass and no face mask is required. I suspect this is because we are so desperate for tourists, the government did not want to impose restrictions on beaches other than keeping sun-beds a bit further apart.

So, we have the paradox of being able to walk unrestricted on a packed beach (you can probably dance as well), but if you are walking on an empty street you have to wear a face-mask. And you need a SafePass for attending an open-air concert or party, but not on the beach. Nothing makes sense in the age of Covidian lunacy.

CASES are on the way down, fortunately, so the beaches will remain free-zones and there is no danger of needing a SafePass to leave your house, for the time being. In fact, cases may go down as much as 50 per cent from today, not because the government’s measures were working but because now that people will have to pay, much fewer rapid tests will be carried out. Some 66,000 rapid tests were carried out on Friday, but the government will be happy if there are half as many on Monday.

On Friday almost two thirds (455) of the positive cases were from the 66,000 rapid tests. The reduction in testing could prove a blessing in disguise as it could move Kyproulla from the dark red category of the ECDC to red or even amber.

THE NIGHTMARE scenario of a new surge in cases – unlikely but possible -could lead the government to make a SafePass required for places with five people, in which case some persons without a pass, would not be allowed entry into the family home. Unvaccinated family members might have to sleep on the beach.

The current 10-person limit has its positives. It could be a boost for small businesses like butchers, neighbourhood grocers, confectioners, kiosks etc that have been driven to the brink of extinction by the supermarkets and ubiquitous bakeries.

The unvaccinated, still a sizeable section of the population, can take their custom to these small shops, although big supermarkets, which have seen profits soar thanks to the pandemic, and bakeries will claim they are victims of unfair competition and demand government impose the show of a SafePass at every shop.

HOTELS are also SafePass-free zones for their guests. As long as guests have a Cyprus Flight Pass, they need to show nothing else to go to the hotel restaurants, bars and other communal areas even if there are 50 people there. They certainly do not have to be vaccinated or have had the virus in the last six months to move freely.

The Cyprus Flight Pass, which is proof of a negative PCR test carried out before arrival to Kyproulla, was accepted at most bars and restaurants in the tourist resorts. But we are desperate for tourists so we cannot inconvenience them the way we do the local population.

A local, who books into a hotel or wants to eat at the hotel restaurant, in contrast, needs to show a SafePass or he/she would not be allowed in. This could qualify as state-sanctioned discrimination, which is justified because the hotels depend on foreign guests and the police state cannot treat them in the same way it treats us downtrodden locals.

DO NOT rule out the possibility that some downtrodden, but wealthy Nicosians eating in the fashionable restaurants of Protaras and Ayia Napa, complain because tourists, suspected of being unvaccinated, are at a table next to them.

Everything is possible the way our society has been split into two sets of insufferable fanatics regarding the vaccines, each set believing the other is made up of suicidal or homicidal morons. As is the case with fanatics they all believe they stand for absolute truth.

The vaccinated believe that getting the jab is the only rational thing to do and they have shown responsibility and community spirit while the unvaccinated were brainless and selfish, putting us all at risk, by taking seriously nonsense and conspiracy theories posted on social media.

The anti-vaxxers consider the jabbed mob as gullible fools who agreed to subject themselves to an untested vaccine that could cause them big health problems in the future, not to mention their brains coming under the control of Bill Gates.

Of the two sets, the self-righteous anti-vaxxers are marginally more insufferable as they treat their opposition to the jab as some kind of religious faith. Perhaps it is because they are the minority and feel persecuted like early Christians during Roman times. The only difference is they do not have to meet in catacombs nowadays because the oppressors are more liberal – they can meet on the beach.

EVEN more irritating than moralising vaxxers and anti-vaxxers are moralising politicians, who have been on the rampage since the Turks announced their plans for Varosha. Prez Nik led the chorus of self-righteous, moral superiority and in an interview with the Greek service of Euronews showed that he would never tolerate discounts on issues of principle.

If the EU failed to punish Turkey for Varosha, he would consider vetoing the positive agenda, he said, but warned that particular care was needed, “because, unfortunately, in Europe, as well, interests are above principles and values.” Was he referring to the principles and values of offering EU citizenship for money, at discounted VAT rates, even though this was against our country’s interests?

PREZ NIK, himself, was the target of some cheap moralising, by Greek gossip rag Espresso, which took great exception to the fact that he had gone with his Missus to a night spot in Athens a week last Saturday, to see a show by performer Takis Zacharatos that also featured popular chanteuse Angela Demetriou.

Nik’s presence at the show, “just four days after the black anniversary of the Turkish invasion in Cyprus” said Espresso, “provokes sorrow and rage.” What was worse, according to the website, was “the joy and exhilaration of the presidential couple, who rushed to be photographed, backstage, full of happiness with the top performer and Angela.”

The president was clapping and smiling at Zacharatos, oblivious, to “the plan of Turkification and de-Hellenising of the fenced area of Varosha,” lamented Espresso.  It did not inform us how many days had to pass, after the black anniversary of the Turkish invasion, before the prez of Kyproulla would be able to enjoy some low-brow entertainment in Athens, without causing offence to the patriotic sensitivity of gossip rags.

GROSSLY under-employed negotiator and loyal servant of all presidents since Glafcos, Andreas Mavroyiannis is preparing for his presidential candidacy giving interviews to everyone. On Monday, in an interview with a TV station, when asked directly about his candidacy plans, he said he would not rule out the possibility, which was taken as a ‘yes’.

Mavroyiannis must have decided to come out of the closet, after Prez Nik said in an interview with Phil, published a day earlier, that he would most definitely not be seeking a third term. I am disappointed why not one of his many interviewers asked Mavroyiannis, why he was being paid as our side’s negotiator for doing about a month’s work in the last four years?

The main message in his interviews was that our side’s big mistake at Crans-Montana was that it failed to counter Turkey’s narrative that the Greek Cypriots had walked out and this had become accepted. He should not worry because the Prez fixed this in his interview with Euronews, when asked about it. He said he “never walked out of Crans-Montana” and as is well-documented, our Nik never lies.

THE RETURN to the glory years of the eighties gathered momentum last week as we inflicted another defeat on the back-stabbing Brits at the UN. Our bad demons had written a totally unacceptable resolution for the renewal of the Unficyp mandate, but with the help of countries like the US we managed to have all the pro-Turkish references removed.

This buoyed our confidence, reported Phil, and the aim of the government was “to keep the issue on the international agenda in view of the UN General Assembly in September.” How many times have we heard such platitudes over the last 47 years? How many UN resolutions did we change and make more favourable over the last 47 years? And the practical benefits for the Greek Cypriot population of all these successes? Zero.

IS IT because all the members of the Council of Ministers are vaccinated that they were entertaining the idea of spending the taxpayer’s money to fix a boat once owned by Glafcos Clerides and turn it into a historical exhibit? The boat, Kaity II, which has a new owner, is falling apart and Larnaca Marina had served notice that it would sell it for scrap to cover unpaid berthing fees.

The cabinet asked the deputy minister for tourism to find out what it would cost to repair the boat and convert it into a historic exhibit. But what is the historic significance of the boat for it to qualify as an exhibit? It was just used by the old sea-wolf for pleasure trips, so why would anyone in his right mind waste his time visiting a boring old boat? If there was at least one unvaccinated minister he/she would have pointed out the absurdity of this idea.

Why patience remains key to a federal solution