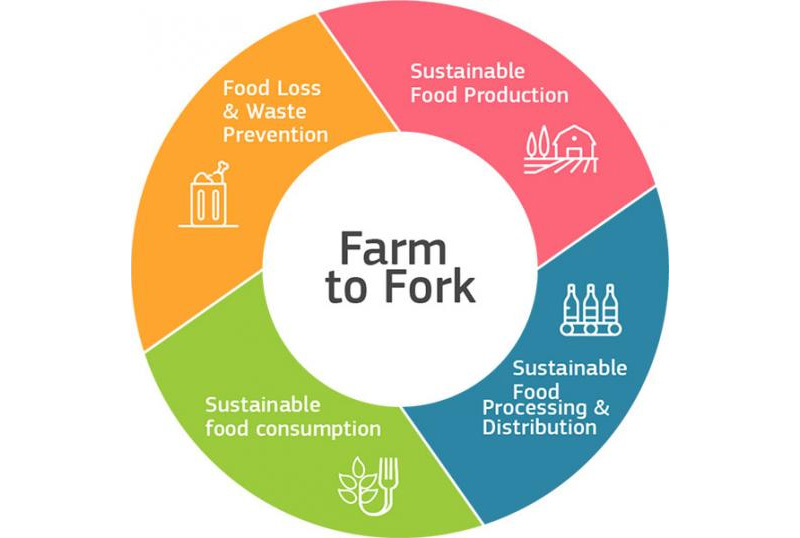 The EU refers to its ‘Farm to Fork’ strategy as being at the heart of its Green Deal and it aims to achieve a fair, healthy and environmentally friendly food system.

Producing food takes a heavy toll on the environment. A big issue is turning nature into farmland which we also pollute, that needs a lot of water, that pollutes the air, has an adverse effect on biodiversity and many other negative effects on the environment.

So in order to reduce the negative impact on the environment the intention is to push mainly for organic farming, better agricultural practices and stricter animal welfare practices.

Two very interesting aspects of this policy are those of tackling obesity and food waste.

In Europe millions cannot afford to buy food every day, half the population is overweight and has bad dietary habits and we throw away one fifth of the food we produce.

Vegans all ever Europe will be happy with EUs intention to move to a more plant-based diet with less red and processed meat and with more fruits and vegetables.

It is considered imperative that consumers should be well informed to make more healthy and sustainable choices. For this to be effective, food labelling should also be true and informative and if not, heavy fines are planned to enforce it.

Reduction in food waste will be left to each country to deal with, but strict targets will be imposed.
Since 1999 biodegradable waste in Europe has been diverted to other uses, such as anaerobic production of biogas and compost.

Another issue that will be tackled is the ‘use by’ and ‘best before’ date labelling on food products. This is a much-discussed issue with some countries implementing their own solutions.

A simple step to reduce food waste in homes would of course be preparing the correct amount of food so that we wouldn’t need to throw any in the bin.
In large catering areas like hotel and event venues we often have large amounts of good food that is thrown away.

Many have tried to divert this food to people in need, but we have such a strict implementation of the Hazard Analysis and Critical Control Point (HACCP) food safety system that it prevents us from taking this otherwise good food to the people in need. There are a number of “schemes” to cheat the system but the government needs to urgently find a solution to this.

Cyprus joined the EU much later and we had a separate target in our legislation which was to manage 65 per cent of our biodegradable waste by 2016. Of course, we are far off this target as even government policies ignore this obligation. This will make achieving the next targets of 2030 almost impossible.

One such policy that is contrary to our EU obligations is that by law we still allow farmers to burn their cuttings. The recent fires this summer were due to such an activity.

The EU’s Green Deal is set to affect great changes in our lives and we need to be prepared to implement them so that we will also be able to reap the benefits that accompany these policies and avoid paying fines.