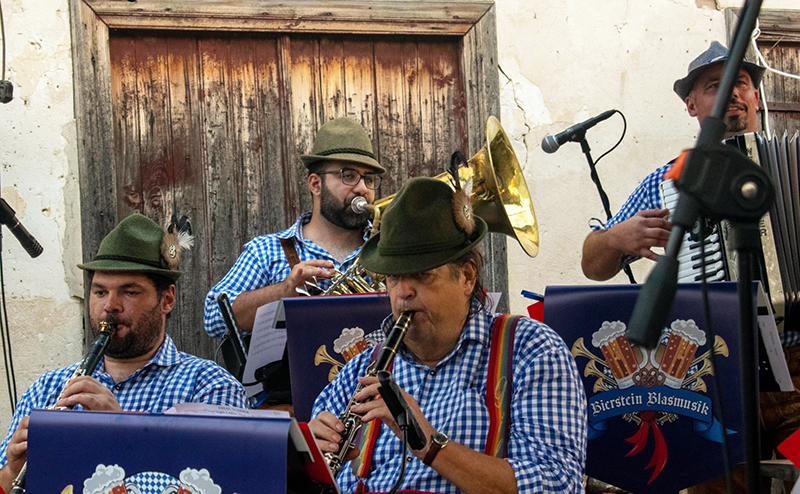 Traditional to Bavaria and Austria, Oompah music is also played by an international band in Cyprus. ALIX NORMAN meets the man behind the band, set to stage an upcoming performance

Oom pah pah, oom pah pah! German drinking songs may be all the rage at Munich’s infamous Oktoberfest but they’re hardly commonplace listening on this island! Unless, that is, you’ve been privileged to enjoy a performance by Cyprus’ one and only Oompah band: Bierstein Blasmusik.

A nine-piece ensemble, the local band is the brainchild of former professional musician and contracts manager, Gloucester-born Steve Walkley. “‘Oompah music’ is a kind of generic anglicised term for the kind of music you would associate with southern Germany (Bavaria in particular) and the Austrian Tyrol,” he explains. “It’s the stuff you’d hear played by village and town bands at festivals, in bars, and at social events, which had its basis in folk and dance music.” 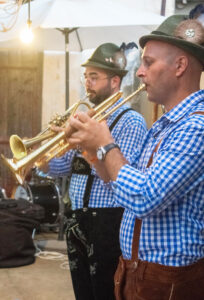 Incredibly jolly, and far more than simply an aural experience, oompah music can be enjoyed by all, Steve says. “It certainly isn’t about performing great music for a musically educated or discerning audience,” he smiles. “I mean of course we endeavour to deliver a high standard of performance. But oompah is more about entertainment; it’s about making people feel happy, giving them a good time, and getting them to feel included and less about asking audiences to sit passively and listen.”

The style has been long associated having a jolly good time, “a knees up, with plenty of beer drinking and typical Bavarian food (including bratwurst, sauerkraut and pretzels),” says Steve. “In fact, that’s where the band’s name comes from: ‘Bierstein’ meaning beer mug, and ‘Blasmusik’ translating as brass band.”

Launched in 2018, Bierstein Blasmusik have been playing at festivals and gatherings across the island ever since. “I’d played in oompah bands several times in the UK, and it was always fun,” Steve reveals. “And though I’d thought about putting my own band together for many years, I never had the opportunity or the time. But when I retired to Cyprus all that changed: I met a few guys who were interested, and as there was nothing else like it on the island, we thought we’d give it a go and see where it took us…”

Popular on the British Bases, and at the Hofbrau Munchen Biergarten bars in Nicosia and Limassol, the band have played at D’Arcy’s restaurant in Peyia, at the Windcraft Music Festival in Katydata, and can be heard at the upcoming Paphos Music Lovers’ Oktoberfest on September 26 at Technopolis.

“Our line-up includes two clarinets, two trumpets, one trombone, a tuba, an accordion, a euphonium (the English version of a German tenor horn), and drums,” explains Steve. “It’s a fairly authentic representation of what one might expect to see and hear from the ‘real thing’ in Germany and Austria, but played by three Cypriots, one Pole, and five Brits – a mixed bag of nationalities, ages, and either semi-retired or full-time professional musicians.”

Based all over the island – “rehearsals can be a bit of a challenge,” says Steve. “The nine of us are spread out between Droushia, Kallepia, Paphos, Limassol, Louvaras and Nicosia, so if anyone knows of a suitable space in Limassol we might use that would be ideal!” The band is led by Steve, who is responsible for coordinating practice time, taking care of administration and fronting on stage.

“But Bierstein Blasmusik is very much a collective in terms of decision making,” he notes. “We’re all good friends who really enjoy playing music and being together. And we have some excellent musicians in the band – people of all backgrounds and ages.

“For us Bierstein oldies, it’s playing music – particularly with younger guys – that keeps us motivated, stimulated and ‘young at heart’,” he explains. “Jim on the euphonium is a very fit and with it 80-year-old; and our clarinettist Dave is well into his 70s and still runs the Droushia Dixie 7 Jazz Band. At 67 I’m a comparative youngster,” he laughs. “But then age is just a number, and being ‘old’ is a state of mind; I reckon people don’t give up playing music because they get old. They get old because they give up playing music!”

With oompah being a fairly high-energy style, it certainly takes a great deal of youthful get-up-and-go to perform live on stage – sometimes for hours at a time (albeit with breaks every 45 minutes), and all while dressed in the traditional Bavarian ‘trachten’ costume: lederhosen, feathered caps, and matching shirts in blue and white check.

“It’s certainly fun for us,” says Steve, “but I think the biggest challenge is making sure it’s a really entertaining experience for our audiences. We aim to give our listeners something to look at and participate in, rather than just something to listen to.

“When you’re sat round tables eating and drinking and enjoying yourself, what you see can be equally or more important than what you hear. Without meaning any disrespect, those with an untrained musical ear tend to ‘listen’ with their eyes more than their ears: if what they see looks good, and the music sounds okay, they’ll feel involved and happy. And that’s really what oompah is about – both for audiences and performers: music that’s enjoyable and fun, relaxed and informal!”

As an experience, oompah is still new to Cyprus. But local audiences are catching on quickly. “Just a few weeks ago, in August, we played to 150 people at the Windcraft Music Festival in Katydata,” Steve reveals. “It was a more formal setting than usual, with rows of chairs rather than tables, and listeners who were mostly unfamiliar with the oompah style. We were a little worried,” he adds, “that this unfamiliar musical style with its inherent humour and informality might get lost in translation. But oompah won the day – there were loads of smiles and applause, lots of compliments and much enjoyment all round. The oompah style may be relatively new in Cyprus, but the audience is definitely growing. After all, music is an international language!”

For more information on the band, visit the Facebook page Bierstein Blaskmusik

Bierstein Blasmusik will be performing at the Oktoberfest at Technopolis 20, Paphos, on September 26. For more information, visit www.technopolis20.com

Coronavirus: Negative test for jabbed to visit north may be scrapped

This week at Sarah’s Jazz Club