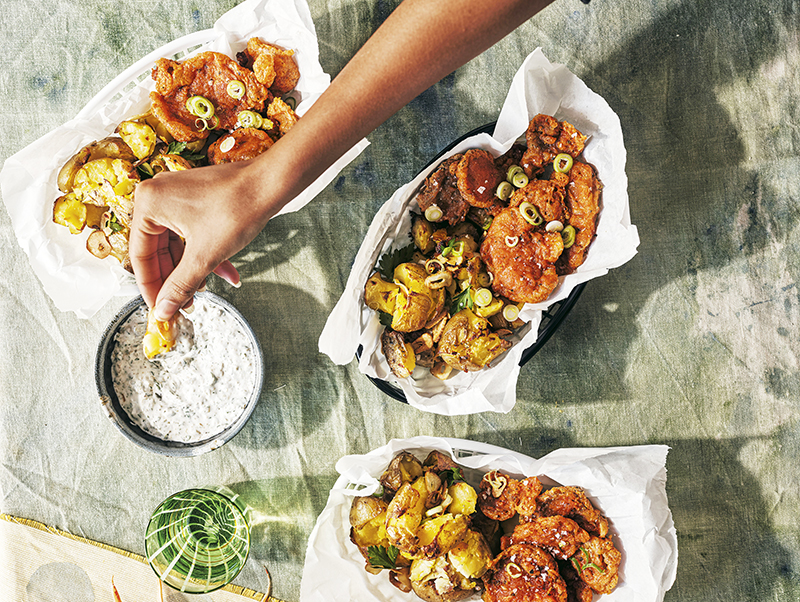 Life has changed “drastically” for food writer Rachel Ama. Alongside things becoming “very stay at home” – as they have for all of us – she also became a mum during the last year.

“I’m so much busier. I didn’t know!” she says with a laugh. “When I’d hear talk from mums about how tired they were, I don’t think I really understood it until I became her. And now I’m like, ‘Wow’.”

This new reality, and the impact on the London-based writer’s cooking, has “followed straight through in my book – it’s just making big food, lots of it, and making it last.”

The new cookbook in question is One Pot: Three Ways, in which Ama presents a main dish or “centrepiece” and then gives you three ways to eat it. Take her sticky cauliflower bites served with rice and sesame seeds, for instance: make a batch and it can then be transformed into a crunchy salad on day two, and into Chinese style pancakes with cucumber on day three.

“I like to think this way of batch cooking is way more delicious,” says Ama, who recommends using up all your odds and ends in your centrepiece dishes too. “It can create a routine of people getting used to eating what they have. And planning a little bit, not too much, because no one wants a rigid plan.”

Ama’s plant-based recipes also feed into and reflect the impact the pandemic has had on how we cook – the constraints and demands we’ve all had to learn to manage. “When life became pretty crazy, there was limited supply of food available,” she recalls. “But there was opportunity to be more creative in how to make food last.

Since her debut cookbook, Rachel Ama’s Vegan Eats in 2019, she says the landscape of vegan food, and the conversations around it, have shifted quite a bit. “Everyone’s more happy to incorporate plant-based meals, whether vegan or not,” she muses.

It’s quite a turnaround in a very short space of time, buy Ama is hopeful she can help people “be excited to see what they can create with legumes” and actually sustain plant-based eating, so you are “full, and meeting your taste buds’ happy places.”

2tsp salt, plus extra to serve

Sunflower or olive oil, for frying

For the Tartare Sauce:

To make the tartare sauce, mix all the ingredients for it in a bowl, then set aside.

Mix the flour, baking powder and seasonings together. Place the cornflour in a separate bowl or on a large plate, and place the mushrooms in a third bowl.

Pour a 2cm depth of oil into a deep frying pan or wok and place over a high heat until it registers 180C on a thermometer. Alternatively, test the temperature by dipping the end of a wooden spoon in it – if it’s hot enough for frying, the oil should bubble around it. Be careful not to overheat the oil or it will begin to smoke.

Whisk the cold beer or soda water into the seasoned flour mixture to make a batter. Then, working quickly, take a piece of oyster mushroom and dip it in the cornflour. Shake off any excess, then dip it in the beer batter before carefully transferring it to the hot oil. Working in batches, cook for three to four minutes, or until each piece is golden and crisp. Once cooked, drain the mushrooms. Season with extra salt and squeeze over a little fresh lemon.

Preheat the oven to 200C.Place a pan of water over a high heat and bring to the boil. Add the potatoes and cook for 15 minutes until tender.

Lightly grease a baking sheet, then lay out the potatoes in a single layer. Use a fork to carefully crush and flatten each potato while keeping it in one piece. Scatter over the garlic, drizzle with the remaining oil and season with salt and pepper. Roast for 20–25 minutes until golden brown.

Remove the potatoes from the oven, turn up the heat and quickly place the battered mushrooms on a wire rack over a baking tray and bake for five minutes.

Serve the mushrooms with the new potatoes, a spoonful of tartare sauce, a squeeze of fresh lemon juice, and a sprinkling of fresh parsley and spring onion.

Place the battered mushrooms on a wire rack over a baking tray and bake for five minutes.

To build your sandwich, spread the tartare sauce on the bottom half of your brioche bun. Pile on the mushrooms, then top with the gherkins, hot sauce and lettuce. Serve immediately.

For the Pickled Red Onion

Meanwhile, make the pickled onion. Place the sliced red onion in a bowl and pour over the vinegar. Add the salt, stir to combine, then set aside for at least 10 minutes.

Place the battered mushrooms on a wire rack over a baking tray and bake for five minutes.

Warm the tortillas in a frying pan over a medium heat for two minutes on each side.

To assemble the tacos, place each wrap on a plate and pile the battered mushrooms on them. Top with the avocado, lettuce and coriander, then drizzle over some tartare sauce and sriracha. Fold the wraps over and serve.

One Pot: Three Ways by Rachel Ama is available now