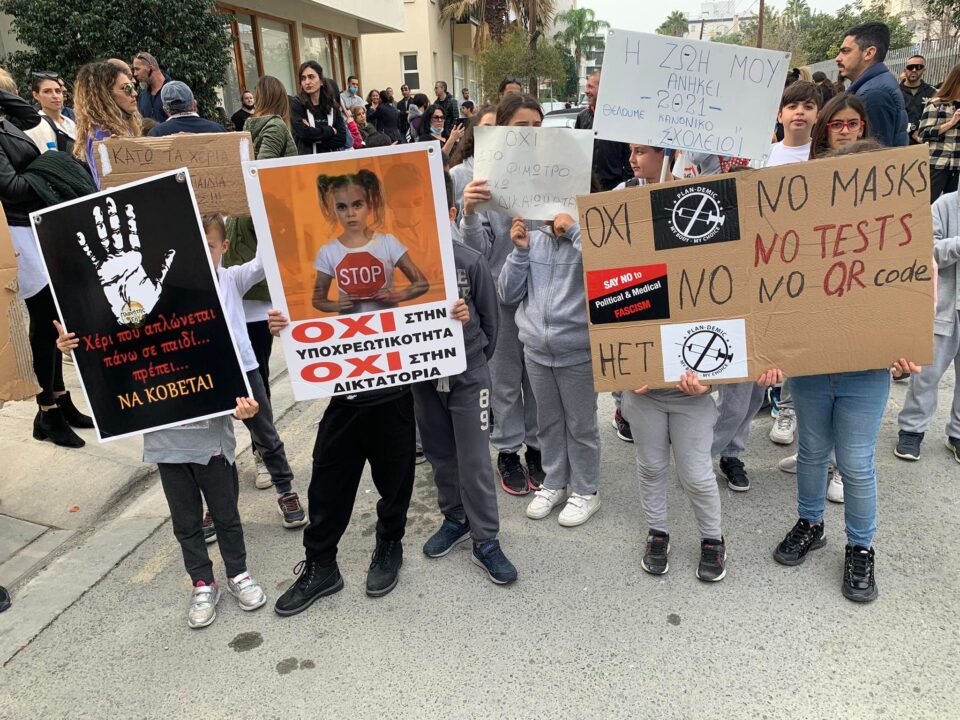 The education ministry condemned issues of verbal and physical abuse directed at primary school teachers on Monday as parents who oppose the use of facemasks and a SafePass by children as young as six held protests in various districts.

As the measures were introduced in schools to slow the spread of coronavirus, parents and children in their school uniform participated in protests outside offices of the education ministry in Nicosia, Limassol and Paphos.

Following a series of demonstrations against the new measures over the previous days, parents gathered outside the district offices of the education ministry in Limassol at 8am, causing traffic obstruction on Franklin Roosevelt street. Protestors also blocked the entrance of DP World Limassol at the port for about an hour.

The area was cordoned off by officers after an explosive device was found outside the ministry’s offices, which did not explode, police said.

Meanwhile, groups of parents and children also participated in a protest outside the education ministry in Nicosia and the district offices in Paphos, saying they will not stop until the ministry overturns the decision.

“We are the future, not your guinea pigs,” and “Hands off our children,” were some of the slogans written on protestors’ banners.

However, some parents appear to have taken protests too far.

The general secretary of primary teachers’ association Poed Charis Charalambous said there have been complaints that individual parents in various schools proceeded to “unacceptable actions and extreme [behaviours] against educators”.

He said school principals and teachers received verbal threats and physical violence and called on school administrations to immediately contact the police, who “must respond immediately” in such incidents.

“Poed will also provide legal assistance to colleagues when and where required,” Charalambous said.

Poed and the administrations will adopt any measures necessary to safeguard the smooth operation of schools “from the irresponsible, who believe that because they disagree with government decisions, they have the right to curse, threaten and attempt to hit teachers.”

Charalambous said the people who act in this way in front of their children “should be ashamed” and society will not tolerate them.

He also thanked the majority of parents, who even if they agree or disagree with any measures, “have behaved responsibly, politely and with respect to their children’s teachers”.

The violent incidents were also condemned by the education ministry in an announcement later in the day. The ministry explained that all the measures taken aim to protect the health of students and educators and “allow us to provide education with physical presence at schools”.

The protests took place after the Pancyprian confederation of parents associations decided to reverse a decision to keep children from school for one teaching period on Monday morning saying they had submitted their suggestions to the education ministry and were expecting the outcome of the cabinet on Wednesday.

On Sunday Health Minister Michalis Hadjipantelas said parents must realise that there are only two options: “either to use the protective mask, which according to experts does not cause any problems, or to close the schools”.

The new measures, in force as of Monday, expand the mask mandate and SafePass to children aged six and older.

The SafePass for these children would need either a certificate of recovery from the virus in the past six months or a negative test not older than seven days. Mobile testing units will go once a week to primary schools for this reason, otherwise children can get tested at free sites arranged by the health ministry, as well as authorised private pharmacies and labs.

The confederation, who said the measures were not justified based on the cases in schools, proposed the use of face masks remain optional and be used only by older children while younger children could have their temperature taken on a daily basis.