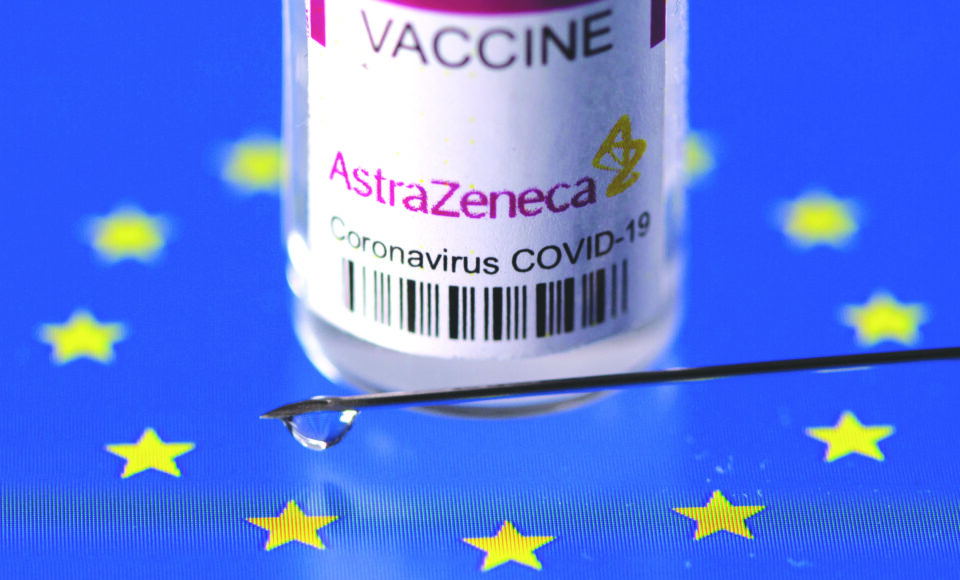 A large study into rare blood clots linked with AstraZeneca’s Covid-19 vaccine found between just one and three cases per million, and only after the first dose, shedding fresh light on the side-effects from the shot.

Researchers have sought to analyse any link between Covid-19 vaccines and rare blood clots in the brain, arteries or veins – sometimes accompanied by low platelets, reports of which led many nations last year to pause use of the AstraZeneca shot, which was developed with Oxford University.

A study http://journals.plos.org/plosmedicine/article?id=10.1371/journal.pmed.1003926 published in the PLOS Medicine journal on Tuesday looked at health records of 46 million adults in England between December 2020 and March 2021 to assess the risk of clots in the month after vaccination with either the Pfizer-BioNTech vaccine or AstraZeneca-Oxford shot, compared with the unvaccinated.

It was carried out by William Whiteley of the University of Edinburgh and Britain’s BHF Data Science Centre.

It found no risk of major arterial and venous thrombotic events in those aged 70 or over with either of the vaccines.

And while the risk of intracranial venous thrombosis (ICVT) following the AstraZeneca-Oxford vaccine was nearly double in those under 70, that was equal to between just one and three cases per million.

The risks of ICVT and hospitalisation with thrombocytopenia “are likely to be outweighed by the vaccines’ effect in reducing COVID-19 mortality and morbidity,” the study’s authors said.

Cases of rare blood clotting emerged early last year as the rollout of the AstraZeneca-Oxford vaccine began in Europe.

Johnson & Johnson’s COVID-19 vaccine, which is based on a similar platform to the AstraZeneca-Oxford shot, has also been associated with the rare combination of blood clotting and low platelet counts.

Some countries have restricted or suspended use of the vaccines after the EU drug regulator confirmed possible links between the shots and the conditions.

International drug regulators have said the benefits of vaccines outweigh the risks.

The study is in line with a review by the EU drug regulator which said last month there were fewer such side effects observed after the second AstraZeneca dose.

AstraZeneca said in a statement the study confirmed what is already known about “extremely rare blood disorders following vaccination.”

“The risk of developing this very rare condition remains substantially higher after COVID-19,” it added.

Last year, a study led and funded by AstraZeneca found its vaccine carried a small additional risk of thrombosis with thrombocytopenia syndrome after the first dose but none after the second.

AstraZeneca-Oxford’s ChAdOx1 nCoV-19 shot, sold under the brands Vaxzevria and Covishield with more than 2.6 billion doses supplied globally as of February, remains a key weapon against the pandemic in middle-income countries.

A second peer-reviewed British study http://journals.plos.org/plosmedicine/article?id=10.1371/journal.pmed.1003927 also released on Tuesday found the risk of cerebral venous sinus thrombosis (CVST) in the four weeks after receiving the AstraZeneca-Oxford shot was roughly twice as high as before vaccination, but it still implied only one in four million people could have the side-effect.

The study assessed data for more than 11 million people in England, Scotland and Wales, spanning nearly seven months from December 2020 to June 2021.