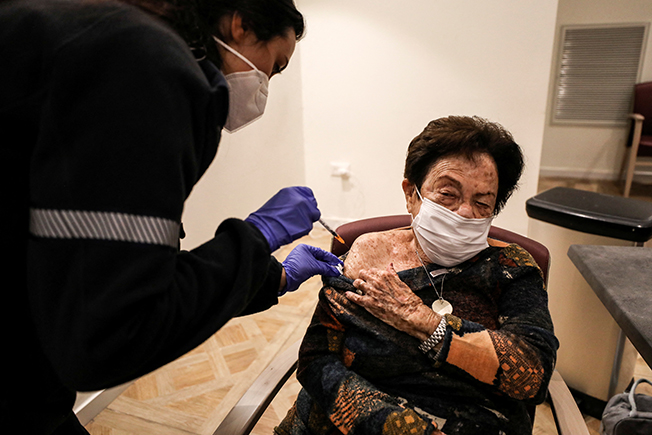 A fourth Covid-19 vaccine dose has been deemed “inevitable” amongst the general population and not just for the elderly or vulnerable groups, while the current testing programme may be trimmed.

A fourth shot for those under the age of 70 would be optimal in the build-up to next winter, government advisor Petros Karayiannis told the Cyprus Mail on Thursday, as he foresees another outbreak in September.

The vaccination advisory team on Monday already recommended an initial booster for children over the age of 12 and a fourth shot for those over 70.

Indeed, Pfizer this week filed an application in the US for emergency use authorisation for a second booster dose for those aged 65 and above.

In it, they filed data from Israel where a second booster was approved for many people aged over 18 – but the information previously released from there has been mixed.

That led government advisor Giorgos Panos last week to hold off on seeking a fourth dose – at least for now – as he said that the data from Israel was not that impressive.

Karayiannis agreed that the data appears to be “mediocre” and that the antibody levels are not that much higher, telling the Cyprus Mail that it may partly explain why not many others have followed in Israel’s footsteps.

But results from another study of Israeli healthcare workers found that a fourth dose was 30 per cent effective against infection.

“The elderly and immunocompromised are the groups that would benefit the most from additional boost,” said Dan Barouch, a Harvard vaccine researcher. “I think the data is supportive, but the benefits appear to be relatively small.”

Karayiannis added that there also appears to be a lack of urgency as there has been in the past over the current dominance of the less severe Omicron variant.

He noted, however, that the advice was given for a fourth shot for the over 70s as they comprise the demographic which is dying. Cyprus has for weeks now been reporting consistent Covid-19 deaths, at far higher levels than previously seen over such a prolonged period of time.

“Their immune status is not as strong as others, even if they have been vaccinated, it may wane much quicker,” he said.

Back in early September, ahead of the initial booster campaign, it was hoped that three doses in total would seal the deal.

“[There is good reason to believe that a third dose] will actually be durable, and if it is durable, then you’re going to have very likely a three-dose regimen being the routine regimen,” said Anthony Fauci at the time, who is the director of the National Institute of Allergy and Infectious Diseases.

Elsewhere, voices of dissent have begun expressing concern over the relevance of conducting roughly 90,000 tests per day and whether the resources involved in such an extensive programme could be put to better use elsewhere.

Pulmonologist Haris Armeftis last week wondered why so much money was being spent on the daily tests – with Cyprus consistently ranking amongst the highest in the world – when the funds could instead be spent on bolstering the hospitals.

Health minister spokesman Constantinos Athanasiou said that the test programme is likely to be trimmed and be made more targeted.

As for masks, which are currently mandated in all outdoor areas unless a person is exercising, Karayiannis said that the issue may be revisited at the end of March if infections subside.

Russian law on leased jets could help in claiming insurance

Anastasiades thanks House of Representatives for approving budget