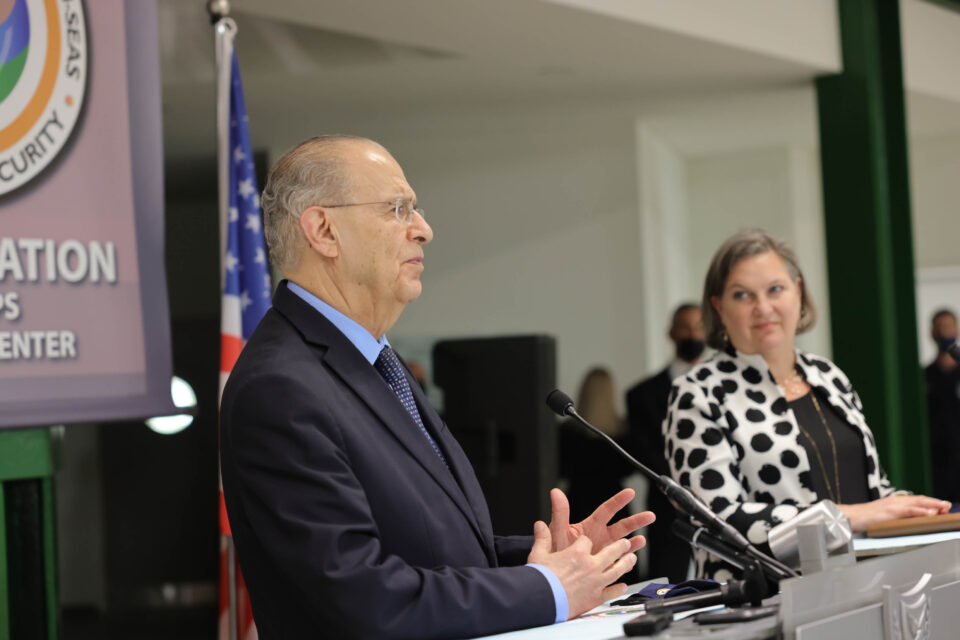 Kasoulides and Nuland after a meeting in Cyprus

With tectonic shifts on the world stage, now really is the time to solve the Cyprus problem and put Cyprus’ energy finds to use

In a fast-changing geopolitical world – following the invasion of Ukraine by Russia – the visit to Cyprus by US Under-Secretary of State for Political Affairs Victoria Nuland this week has been revealing. She has delivered a number of important messages that we should listen-to carefully. And I am not referring to her message ‘sounding the death-knell’ for the EastMed gas pipeline.

Nuland said that Turkey is seeking to diversify its energy supply sources and specifically that the Turkish market should become independent from Russian gas. She saw “an opportunity in this that we need to develop and that we need to keep talking about.” Commenting on the Turkey-Israel rapprochement, she said “this is also in our interest. We are convinced that it is in our interest to have strong relations between Turkey and Israel, both in terms of trade and energy.” She then went on to add that new gas discoveries and pipelines will need to be made in the East Med.

The US appears to support the possibility of Israeli gas exports to Turkey to replace Russian gas imports, providing opportunities for Cyprus and the region.

The visit of Israel’s President Isaac Herzog to Turkey on March 9 appears to have rekindled the relationship between the two countries. Following their meeting, President Erdogan said “the coming period will bring new opportunities for both regional and bilateral cooperation,” adding “I hope this important visit… will provide an opening for future joint opportunities.”

Most Turkish media saw this as an opportunity for Turkey to press for a pipeline to export Israeli gas to Europe through Turkey. But they are making the same mistake as those still advocating for the EastMed gas pipeline.

Europe has repeatedly made it clear that its quest for alternative gas sources to Russian gas is confined to the short-term and certainly not beyond 2030.

In fact, the EU has re-confirmed its commitment to accelerate energy transition to renewables and hydrogen. In this context it is targeting to reduce natural gas consumption by 30 per cent by 2030 and by 80 per cent by 2050.

These two clear positions by the EU exclude long-term gas projects that target Europe as the final destination for such gas. Both the EU and the US have made their opposition to such projects clear: investing in new long-term fossil-fuel facilities will lock them in, delaying transition to clean energy.

That is why the US has been a firm supporter of developing energy regionally, green energy and electrical interconnectors – a position I have been advocating for a long-time now. Nuland’s statements last week not only reinforce this, but go one step further. She talked about strengthening the Israel-Turkey relationship and connected this to energy and regional gas pipelines and diversification away from Russian gas dependence.

Export of Israeli gas to Turkey

The idea of exporting Israeli gas to Turkey is not new. But now there is a new twist to this. It can help Turkey reduce its dependence on Russian gas.

Last year Turkey imported 27 billion cubic metres (bcm) – about 45 per cent of its gas imports – from Russia through two pipelines, Blue-Stream and Turk-Stream.

Israel’s Leviathan gas field has about 300bcm spare capacity and can easily supply Turkey 10-12bcm/yr. For Israel, such a pipeline would in effect replace the EastMed gas pipeline.

Nuland implied that Turkey would welcome this, stating that during her visit to Ankara she got a strong feeling that “Turkey is seeking to diversify its energy supply sources.” She added, “so maybe there is an opportunity in this that we need to develop and that we need to keep talking about.”

But Israel has also made it clear that its relations and energy projects with Turkey will not be developed at the expense of those with Greece and Cyprus.

The opportunity for Cyprus

In a recent interview Cyprus Foreign Minister Ioannis Kasoulidis referred to “a period of tectonic geopolitical changes in international relations,” indicating that it is time to resolve regional issues, starting with the Cyprus-problem.

Responding to the question “Can energy discussions ease the situation and possibly lead to new discussions about the Cyprus issue,” Nuland said she now sees an opportunity. “We always talk about trying to get a peace deal to ensure a bicommunal federation and then exploiting energy.”

The opportunity is to join Israel and export natural gas from Leviathan, Aphrodite and Glafkos through a joint pipeline to Turkey. This could be subsea all the way or could pass through Cyprus. There is sufficient gas in these gas-fields – close to 600bcm – not only to reduce substantially the gas dependency of Turkey on Russia but also to replace all of it – depending on Botas’ contracts with Gazprom.

But a pre-requisite to this is a solution of the Cyprus problem. This would also remove a thorn in the relations between Turkey and the EU. Turkey’s Foreign Minister Mevlut Cavusoglu said recently solving the Cyprus-problem would immediately solve 60 per cent of the problems troubling the East Med region.

As Kasoulides said, “If there is to be a solution to the Cyprus problem, it must be done now.”

Nuland’s visit to the region was quite timely. We often need this kind of intervention because we tend to get carried away with our own arguments, interpreting everything within the microcosm that makes Cyprus.

There is certainly a fair wind of change and rapprochement in the region. Turkey’s new-found interest to mend fences with its neighbours, including Greece, is a good start. Energy is back to the forefront, but this time with feasible options. The key to unlock this is a solution to the Cyprus problem – omens are now converging and the opportunity must be seized.

Among the many benefits for Cyprus, in energy terms, development of Aphrodite and Glafkos can also supply the island with plentiful and cheap gas and unlock serious growth in renewable energy in line with EU’s expected target – to provide 60-65 per cent of electricity by 2030.

It would also provide a serious alternative to the planned import of LNG – a project mired in problems that, based on unconfirmed industry sources, are becoming even more serious.

In terms of the political situation, there is now a serious opportunity to pursue solution of the Cyprus problem coupled with energy developments, brought about by the global energy crisis and the war in Ukraine that have upended geopolitics and energy markets for good.

Nicosia keen on Nato membership but Turkey remains an obstacle