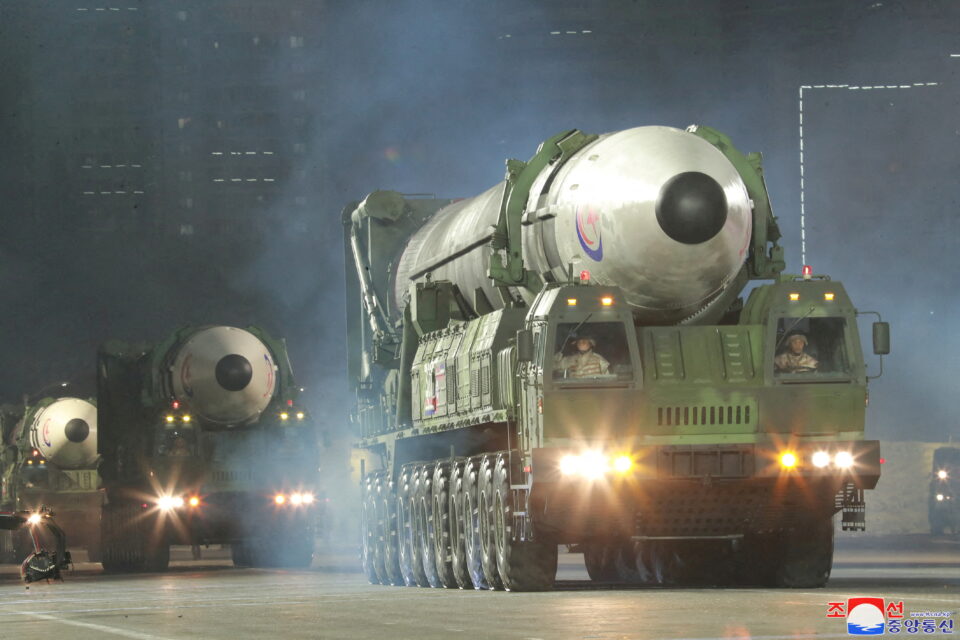 File photo: Hwasong-17 intercontinental ballistic missiles take part in a parade to mark the 90th anniversary of the founding of the Korean People's Revolutionary Army  on April 26, 2022.

North Korea fired a ballistic missile toward the sea off its east coast on Wednesday, South Korea and Japan said, about a week after Pyongyang vowed to develop its nuclear forces “at the fastest possible speed”.

South Korea’s Joint Chiefs of Staff (JCS) said it detected the launch about noon in the Sunan area of the North’s capital of Pyongyang, home to an international airport and the area from which the North said it had fired its largest intercontinental ballistic missile (ICBM), the Hwasong-17, on March 24.

“A recent series of North Korea’s ballistic missile launches poses a grave threat to the peace and stability of not only the Korean peninsula but also the international community,” the JCS said in a statement, urging the North to immediately stop such actions.

The offices of both outgoing and incoming South Korean presidents strongly condemned the launch, with Yoon’s team vowing to strictly respond to such actions and devise “more fundamental deterrent measures”.

Japanese deputy defence minister Makoto Oniki put the missile’s range at 500 km (311 miles) and its maximum altitude at 800 km (497 miles). He said the ministry was still analysing the data to determine its type.

“North Korea’s recent action, including frequent missile launches, cannot be tolerated, as it poses a threat to security and safety of the region and international community,” Prime Minister Fumio Kishida told reporters, adding that Japan had logged a protest against North Korea.

ANOTHER TEST OF SPY SATELLITE?

In Seoul, officials and experts say it is too early to say if the latest test involved an ICBM.

“It might be an ICBM or something with a shorter range,” Lee Jong-sup, Yoon’s pick for defence minister, said at his confirmation hearing on Wednesday.

Ankit Panda, a nuclear policy expert at the U.S.-based Carnegie Endowment for International Peace, said the launch possibly involved technology for satellite reconnaissance systems, which the North tested in February and March.

Cheong Seong-chang, a specialist on North Korea at the Sejong Institute think tank in Seoul, agreed.

“Today’s range and maximum altitude was similar to those recorded in the two previous tests, but showed progress in its capability,” Cheong said.

Ahead of Yoon’s inauguration, he is mapping out a foreign policy agenda after signalling a tough line against Pyongyang, while leaving open the door for dialogue.

Lee, a retired former deputy chairman of JCS, told the hearing he would beef up South Korea’s deterrent capability to “sternly” respond to the North’s nuclear and missile threats.

Asked at the hearing about a potential new nuclear test, Lee said preparations seemed to be under way, possibly for a smaller, tactical nuclear weapon.