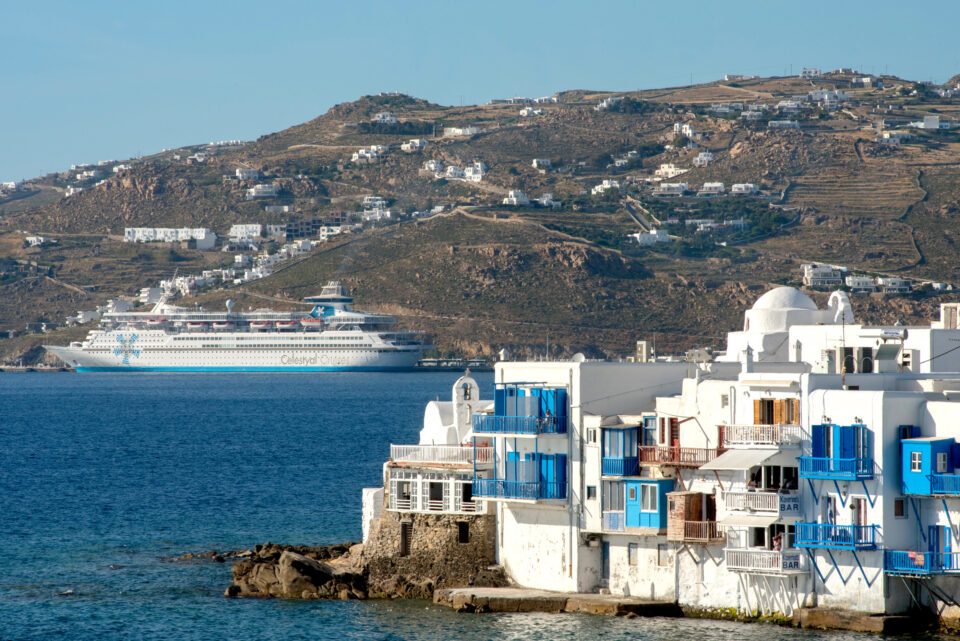 From ancient Greece to modern-day life, island-hopping gives a flavour of what’s on offer in the Aegean Sea, says AINE FOX

As the Aegean sea glistens and shimmers in the sunshine, the view becomes more breathtaking with every narrow turn the tour bus makes, high up into the hills of Santorini.

Arriving by cruise ship, the whitewashed houses dotted along the cliff in the distance had resembled a snow-capped mountain.

But the 30C heat quickly reminded me I am in Greece, on an island-hopping adventure.

Our tour guide Thea tells us cruising the Greek islands is like an appetiser, giving us a taste of what is on offer, each with a different flavour.

From the chic streets of party island Mykonos, to the stunning views of the quieter Patmos, and the historical ruins of Crete – I am already planning my return for a longer stay. The main course, if you will.

Our three-night all-inclusive sailing with Celestyal Cruises sees us setting off early from Athens for a jam-packed exploration of the Aegean Sea, taking in some of Greece’s most beautiful islands.

It’s possible to do a DIY version by taking ferries between islands of course, but an organised cruise takes the pressure off, with an itinerary in place, accommodation taken care of and no need to think about traipsing around the streets with luggage in tow.

While our sailing is short it involves both the wonders of ancient and modern Greece.

A stop off at the Turkish port of Kusadasi sees us step back in time to the ruins of Ephesus, dating to around the 10th century BC. Standing in the middle of an amphitheatre with the hot sun beating down, you can’t help but imagine the Gladiators striding forward as the crowd of thousands packed into the stone seats cheers them on.

A day later, in Heraklion on the island of Crete, we visit the ancient Knossos Temple where we learn of the origins of the famous Minotaur, which according to Greek legend, roamed the tunnels under the sprawling palace.

As fascinating as ancient Greece is, it’s the modern-day island experience I’m most keen to sample. Our stroll through the streets of Mykonos brings to life the picture-perfect postcard image I had in my head.

The paved streets are spotless, the whitewashed houses adorned with vibrant blue rooftops and doors, while fuchsia-coloured bougainvillaea drape over laneways and outdoor stairwells, making for the most beautiful scene against a clear blue sky.

Coloured cushions are placed on whitewashed seats and benches, which jut out from the bars and shops, in an effortlessly stylish version of cafe culture.

Cat lovers are in for a treat as moggies – lots of gingers – laze in the evening heat, stretching themselves along walls or in shop doorways. Their relaxed demeanours are a reflection of the slow pace of life and holidaymakers’ mood around them.

Dining outdoors by the waterside is already pretty atmospheric, but when the restaurant lights flicker just as the baked aubergine in a delicious tomato sauce is being served, things take a more magical turn.

Our 10pm departure time to the ship means we don’t quite get to sample the party reputation Mykonos (where celebrities including Leonardo DiCaprio and Beyonce are said to have holidayed) is famed for. But that leaves all the more reason to return.

Sleeping on the ship also makes for a more economical holiday, with our tour guides telling us overnight stays in the likes of Mykonos and Santorini are on the pricier side.

There is certainly something to be said for drawing back the curtains to a new scene every morning.

Adventuring means early starts, with 6am breakfasts and 7am departures, but it’s worth it to see as much as possible, and there is always time for a nap back on the boat between stops if needed.

Otherwise, there is plenty to keep guests entertained on our ship, Celestyal Olympia. Whether that’s a dip in the pool on deck nine, a cocktail while watching the sunset from the Horizons bar on deck 12, or a treatment at the beauty centre on deck five.

Among the delicacies we enjoy are Greek salad (of course), falafel souvlaki, and traditional baklava for dessert.

Off the ship, a must-have is bougatsa – a Greek custard pie with filo pastry, dusted with cinnamon and icing sugar. As we sit outside a café in Crete, with locals emerging from a nearby church to get a morning coffee, we feel we really must try the savoury cheese-filled version as well, and we’re not disappointed.

Back on-board, the night can be rounded off with one of the entertainment shows, featuring music and acrobatics, or with a nightcap in one of the bars, as guests mull over the sights and sounds of that day, and the new adventure tomorrow will bring.