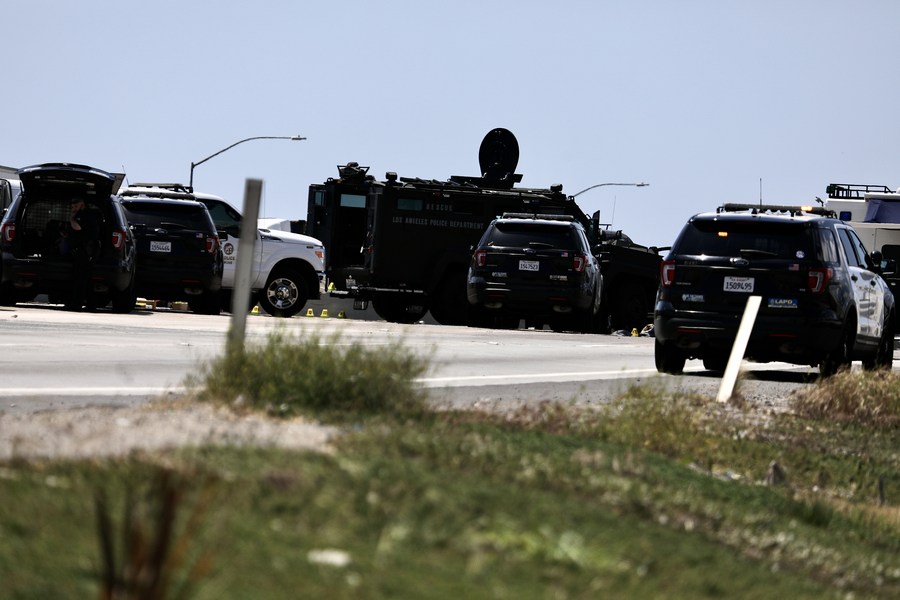 Police officers investigate at the scene where the gunman was killed in Fullerton shootout in Los Angeles, California, the United States, April 27, 2021. (Xinhua)

Marge Raya, a logistics manager in her 40s working outside of Washington DC, said she no longer ventures into the city at night.
“I avoid it. It’s not worth going to areas that have a surge in crime,” she told Xinhua.

Her statement reflects a growing reluctance of many Americans to venture into major cities at a time when violent crime is surging to record highs.

The cities of Cleveland, Chicago, Austin and Savannah saw a string of mass shootings during the weekend, according to news reports.

As of June 12 this year, the U.S. has suffered 272 mass shootings, according to Gun Violence Archive.
Statistics from the Federal Bureau of Investigation show the murder rate surged by 25 percent in 2020 — the first time the United States has seen over 20,000 annual murders since 1995 — up from 16,000 the previous year.

As of May 25, Los Angeles saw a 26.5 percent increase in the murder rate, according to the City of Los Angeles.

As of May 21, the city of Philadelphia saw a 38 percent crime increase, according to the city’s District Attorney’s office.

The New York Police Department reported in early May that shootings were up 166 percent in April, compared to the same period last year.

Portland, a city in the Pacific Northwest, known for its green environment and fresh air, erupted in violence with riots on a nightly basis for months after the police killing of George Floyd, an unarmed black man.

The city is now on track to surpass the all-time record for murders this year. As of last week, Portland has seen 37 murders so far this year, over six times the amount in the same time last year, according to the Associated Press.

Irene Moody, a nurse in her 60s, who moved from the city of Philadelphia to a suburban area of New Jersey, told Xinhua she still goes to nearby Philadelphia to get her hair done, but “I wouldn’t go back there to live because of the crime.”

Some experts point to the fact that the pandemic has led to a separation between individuals and institutions, which has caused an uptick in crime.

Patrick Sharkey, a sociologist at Princeton University, told the Atlantic Monthly in a recent interview that in areas where institutions break down, people feel like they’re on their own, which creates conditions where violence becomes more likely.

John, a police officer in the U.S. state of Pennsylvania, told Xinhua he believes major cities like New York are suffering from multiple factors that have coalesced and caused crime to skyrocket.

Police leaving their jobs, cities not hiring enough new officers, and low police morale have contributed to a surge in crime, he said.

A COMPLEX ISSUE
Conservatives, Republican lawmakers and law enforcement said that the “defund the police movements” – which sprouted up in cities nationwide after Floyd’s murder – were to blame.

Others said, however, that violence is also going up in cities where police funding has not been slashed.
In a recent opinion article published in USA Today, Jason Johnson, former deputy police commissioner for the U.S. city of Baltimore and the president of the Law Enforcement Legal Defense Fund, said that even the “most dedicated officers, who now face a greater risk of being sued, fired or prosecuted for doing their job, feel pressure to…take a more passive approach.”

In a Wall Street Journal OP-ED published last week, Robert L. Woodson, an African American and head of the Woodson Center, said that calls to defund the police have made black neighborhoods more dangerous.

“Over the past few years, the deaths of unarmed black people at police hands-including the murder of George Floyd -have rightly generated national outrage,” Woodson said.

Yet, the movement to defund the police, which rose to prominence after Floyd’s death, “has actually gotten innocent black people killed,” Woodson said.

The parents, youths, community leaders and law enforcement are strongly opposed to defunding the police, advocating instead for measures that ensure responsible policing, according to the OP-ED.
Despite nationwide protests over police brutality, a Gallup poll published in August found that 61 percent of African Americans said they want police to spend the same amount of time in their neighborhoods, and 20 percent said they want more police.

That totals 81 percent of African Americans who want the police presence to remain unchanged or to increase, according to the poll.

Some experts believe Democrats could be hurt in next year’s midterm elections, due to calls from the Party’s progressive wing to defund the police.

“Higher crime rates are generally dangerous for incumbent parties,” as voters tend to attribute blame to whoever is in power, Christopher Galdieri, assistant professor at Saint Anselm College, told Xinhua.

“And there’s some evidence… that the ‘defunding’ calls from the left hurt congressional candidates more than anyone in the party realized at the time,” Galdieri said.