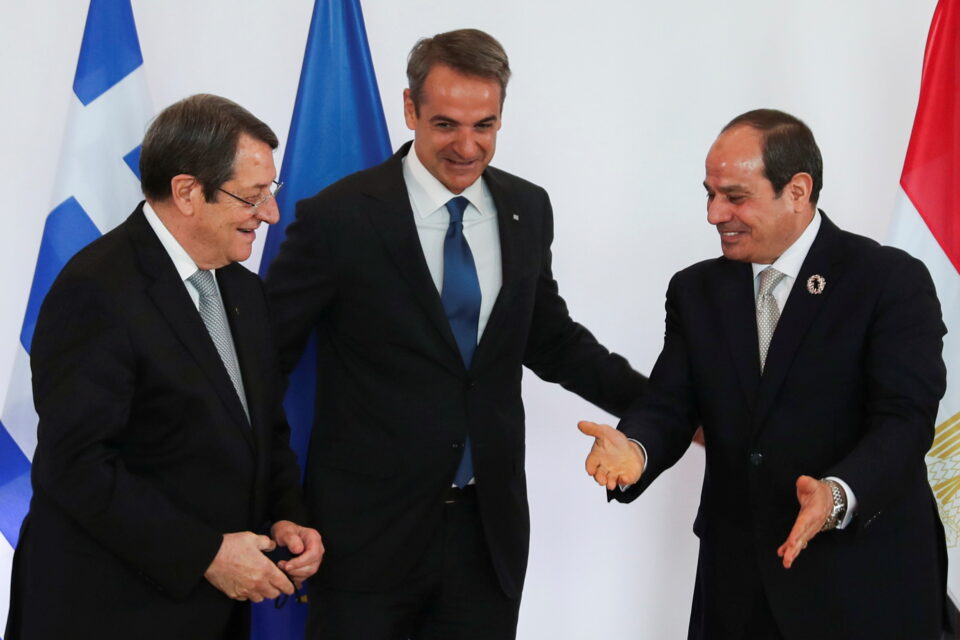 Cyprus, Greece and Egypt signed a tripartite Memorandum of Understanding (MoU) to connect their respective electricity grids in Athens on Tuesday, with the Greek premier calling the emerging alliance among the three nations a “beacon of stability” in the eastern Mediterranean.

“In an era where we seek energy diversification, Egypt can become a supplier of electricity generated mainly from the sun,” Mitsotakis added.

Separately, Nicosia and Athens have recently signed preliminary deals with Egyptian authorities to link their power systems to Egypt’s via a subsea cable.

The interconnector will transmit power produced by renewables in North Africa to Europe.

The leaders called the planned electricity interconnection a project which “strengthens our economic cooperation and the security of energy supply not only of the countries involved, but also of Europe.”

The project is said to be an important component of the development strategy of the Eastern Mediterranean Energy Corridor, providing an alternative source of energy supply from the region to the European Union and vice versa.

In his own remarks, President Nicos Anastasiades stressed that trilateral associations in the region exclude no one, not even Turkey, provided that countries respect international law and the sovereignty of nations.

“Unfortunately,” Anastasiades added, “Turkey displays a revisionist and expansionary policy, making it a ‘troublemaker’ in the region.”

Prior to the signing of the MoU, the three leaders and their delegations held talks covering regional politics and security.

The declaration of the 9th Trilateral Summit of Greece-Cyprus-Egypt sends a message to Ankara to refrain from provocations and unilateral actions that violate international law, such as the harassment of research vessels licensed by Greece or Cyprus.

The three leaders also rejected illegal drilling and seismic surveys by Turkish vessels within the Cyprus EEZ/continental shelf in regions of the sea that have already been demarcated in accordance with international law. They also condemned the continuing violations of Greek airspace and all other illegal activities in areas within the Greek continental shelf, in violation of international law.

Later in the day, and following the conclusion of the summit, Anastasiades was scheduled to have a one-on-one meeting with Mitsotakis at the Greek premier’s residence.

A roundtable discussion also took place on the sidelines of the trilateral meeting with the participation of representatives from energy and maritime companies to discuss the transportation of liquefied natural gas (LNG).

The EuroAfrica Interconnector is a high-voltage direct current interconnector and submarine power cable between the Greek, Cypriot, and Egypt power grids through the Greek island of Crete. Dubbed an ‘energy highway’ bridging Africa and Europe, it will have a capacity to transmit 2,000 megawatts of electricity in either direction.

In the first stage, the interconnector will have a capacity of 1000 MW. It’s estimated that the first link between the Burullus gas power plant in Egypt and Kofinou in Cyprus will be finished in 2022. The longest interconnection between Kofinou and Fodele on Crete will be completed in 2023.

During 2014 Egypt suffered major power blackouts. In 2015 the country signed a $9 billion contract with Siemens to supply gas and wind power plants.

Given that renewable energy sources on isolated systems like Cyprus’ could compromise the electrical system due to chaotic production fluctuation, connection with other grids will enable high percentage of renewables.