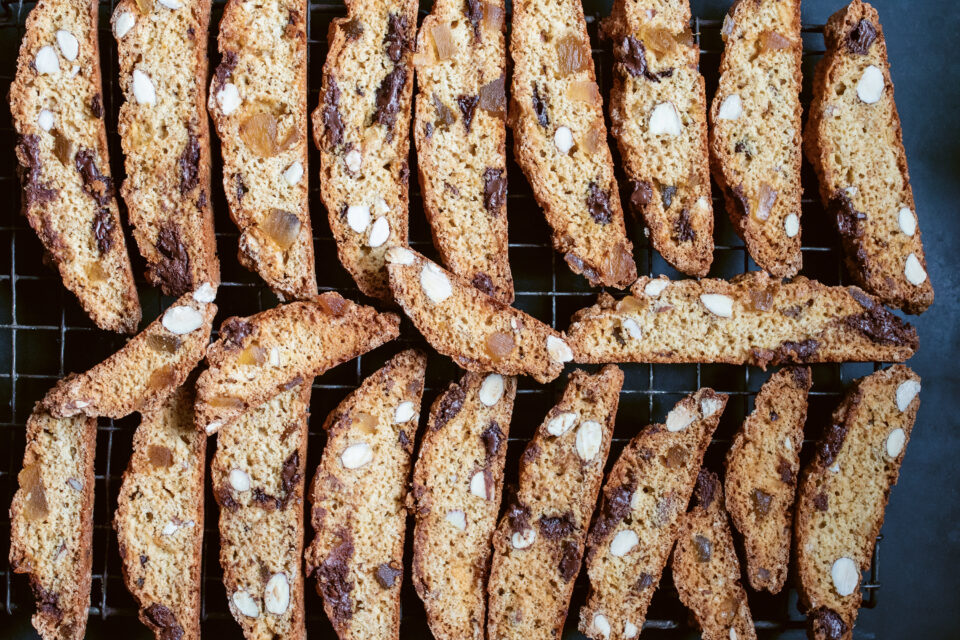 Everyone goes on about the palaver of the turkey come December 25, but some of the best festive cooking at this time of year is actually spent in the run up to the big day.

Making the Yule log, baking festive cookies and decorations to hang on the tree, mixing the Christmas cake or pudding – it’s these quiet, thoughtful moments, packed with tradition, that build the warm, cosy, cinnamon-scented aura of Christmas. And arguably, no one captures this better in bakes than the Germans.

Now food writer Anja Dunk, has collected together a whole slew of festive German bakes in her new cookbook, Advent. We grabbed some gluhwein and put some recipes to the test…

As a lifelong lover of gingerbread, I jumped at the chance to make these jam-filled biscuits – and I’m glad I did, because it was worth it for the smell of the spices wafting through the house alone.

The process was a bit fiddlier than your average biscuit and my efforts weren’t the most finessed but it still tasted delicious.

125g (1 cup minus ½tbsp) plain flour, plus extra for dusting

For the Lebkuchen spice mix: (makes about 8tbsp – mix all the ingredients thoroughly together in a bowl and store in an airtight jar for up to a year)

Melt the butter and honey in a saucepan over a low heat for a few minutes, stirring until the butter has melted and is incorporated into the honey. Allow to cool.

Put the dry ingredients and mixed peel into a bowl, pour over the honey mixture and stir everything together. When it becomes too difficult to stir, use your hands to bring the mixture together into a dough, then knead for a few minutes until smooth.

Split the dough in half. Roll out one half on a lightly floured surface to around three millimetres thick. Using a heart-shaped cookie cutter, cut out 10 hearts and place them on a baking sheet, spaced about two centimetres apart. Spoon half a teaspoon of jam onto the centre of each heart. Now roll out the other half of the dough to the same thickness and cut out 10 more hearts. Roll over them again so that they become slightly larger and thinner (as they need to be domed over the jam).

Dip your finger into a bowl of water and run it around the dough edge of the jam-covered hearts. Place the larger hearts on top and seal the edges by pressing round them lightly with your fingertips.

Bake in the centre of the oven for about 12 minutes until slightly golden and firm to the touch, but not browned or hard.

While the biscuits are baking, mix all the glaze ingredients together in a bowl to a smooth icing.

Transfer the biscuits to a wire rack and, while still warm, brush the tops with the glaze.

I chose this recipe for two reasons. I like biscotti (and especially the sound of ginger and chocolate) plus I imagined they’d be relatively simple to make.

The first stage is certainly easy but engrossed in a Netflix movie, I take my eye off the ball – and discover I’ve made a tray of giant burn-scotti. Not impressed.

I try them anyway. They’re certainly crisp! Despite the very scorched edges, there’s hints of ginger and the dashes of chocolate and sea salt are nice. I’ll definitely make them again (and keep a closer eye on the temperature and timings!)

Heat the oven to 180C/160C fan/350F and line a large baking sheet with nonstick baking parchment.

Put all of the ingredients into a large bowl and stir them together with a wooden spoon until a dense, damp dough forms.

Spoon the dough onto the lined sheet and shape into a log about 25 centimetres long and around eight to 10 centimetres in diameter. The dough is pretty tacky and so won’t look all that neat, but will even out in the oven. Sprinkle demerara over the top. Bake for 25–30 minutes until firm to the touch and just golden – it should be cooked through but not hard.

Transfer onto a wire rack to cool completely.

Set the lined baking sheet aside, ready for the second bake, and reduce the oven temperature to 150C/130C fan/300F. On a chopping board, and using a sharp serrated bread knife, cut the log into slices seven and a half millimetres thick. Arrange tightly on the lined baking sheet and bake for 25 minutes, turning them all over halfway through, until crisp on both sides.

Take out of the oven and transfer to a wire rack to cool completely.

ADVENT: Festive German Bakes to Celebrate the Coming of Christmas by Anja Dunk is available now

How much trouble is Boris Johnson in? Lessons from the fall of Margaret Thatcher