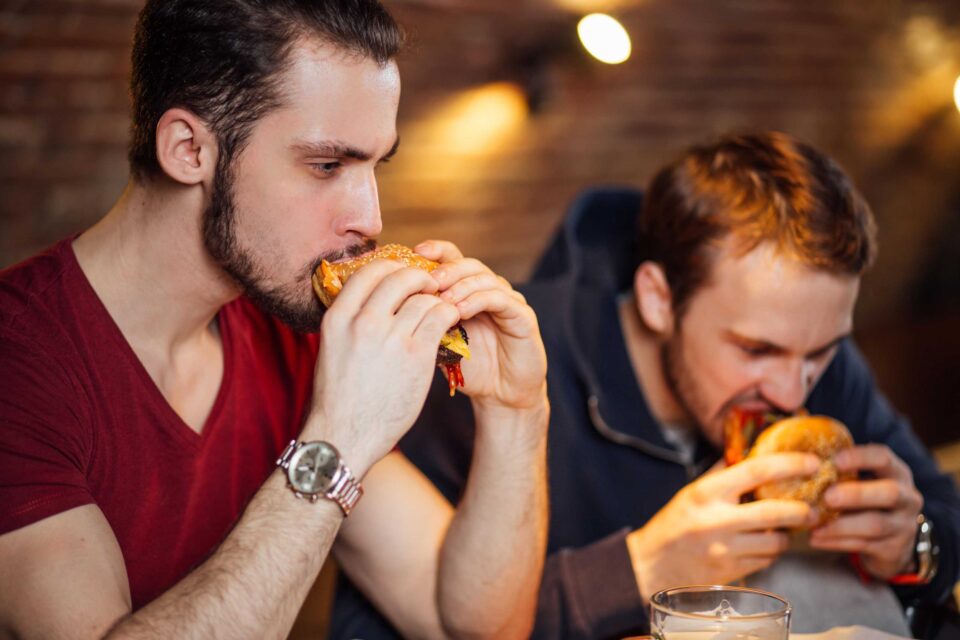 Diet talk can be hard to escape at any time of year, but it’s often ramped up in January, with weight loss and health kicks topping New Year resolutions lists. What happens if you’re really working hard to break away from toxic diet culture though?

What if after years of being caught in a loop of disordered eating, yo-yoing weight and self-esteem, or if you simply no longer want to be part of the world’s obsession with calories and clothes sizes, you’re finally ready to say enough is enough – only to realise not everyone’s on the same page?

Sure, you can unfollow Instagram accounts, block ads and choose which media to consume. But what about the colleague who comments on your lunch and makes sure you know they’re ‘only’ having a tiny salad? What about the friends who give regular updates on their calorie-tracking apps? Or who can’t open a menu without saying how ‘good’ or ‘bad’ they’ve been that day?

Senior therapist Sally Baker (workingonthebody.com) agrees these things can be “hugely triggering” and says: “A lot of my clients who’ve struggled with eating and food in the past are triggered by things that could seem to be innocuous comments, and by overhearing people’s stories of diet and restriction.”

And it’s important to be aware – we just don’t know what somebody’s history or private struggle is. As eating disorder campaigner Hope Virgo, founder of the ‘Dump the Scales’ campaign, points out, only 6% of people with an eating disorder are technically underweight. Plus there are endless folk who may not have an eating disorder, but the toxic diet culture and body-shaming messages we grew up with have still had a big impact on them, which they’re trying hard to heal from.

Navigating these conversations can be anxious territory, especially if you don’t want to disclose personal details every time the topic comes up. Baker recommends having a quick response at the ready, which she calls “the stuck record” approach.

“When someone says something to you about dieting or whatever, you just say something along the lines of, ‘Oh I don’t really talk about diets’, or ‘I don’t really get involved with diet talk’ – and then smile and move on. Just a short phrase that you don’t extrapolate on, you don’t explain.” Repeat if you need to, but hopefully people will get the message eventually.

Avoiding “hotspots” is another strategy. This might be around the school gates, says Baker – so parents worried about being caught in ‘diet chat’ might just do a drop and run, a quick hello then say you need to dash. Another example might be switching gym classes – if there’s an instructor who constantly talks about body shape and torching calories and it bugs you, find another one.

Keep calm and carry on

Yes, it probably will feel uncomfortable practising the broken record technique at first, but there are things we can do to help stay on track. Baker is a fan of Emotional Freedom Technique (EFT) or ‘tapping’, which involves tapping acupressure points on the body with your own fingers to bring about a sense of calm.

“You can tap the sides of your fingertips with your thumb – you can do that in your pocket, no one needs to see you. This tapping method can really help you stay calm and centred.”

When harmful thoughts do pop into your head (eg, thoughts of restricting) she suggests making a noise – either out loud or in your head – like an ‘urhhh-urhhh’ sound on gameshows when someone gets a question wrong! “To recognise that that’s a bull**** thought and to interrupt it,” says Baker. “What this does is recognise that thoughts are just thoughts, and you don’t have to be caught in a loop with your thinking, you can interrupt it.”

You look so slim!

Sometimes, people may have a genuinely healthy motivation for losing some weight or eating differently. Taking positive actions to care for our health is a great thing. But toxic diet culture is so deeply ingrained in society, could it help if we were all a bit more aware of our words? Baker believes we’d all benefit from simply moving on from commenting on other people’s bodies. This is especially relevant right now, when many people’s weight may have changed over the past couple of years.

“Lots of people have lost or gained weight during the pandemic. But that could be because of bereavement, or they’ve been really ill, or really worried,” says Baker. “It’s just not advisable to comment. We do it as a sort of shorthand, like when you meet somebody at a party and say, ‘Oh what do you do?’ It’s the same with weight. The social shorthand needs to shift, so we say things like, ‘Oh I really like you in that colour’, or ‘Wow, is that a new haircut?’”

It can seem like we’re paying someone a compliment when we tell them how slim they look, but not only does this overlook the possibility that something unhealthy or painful is going on, it reinforces the message that slimmer is always better. While we may not dream of telling someone they’ve gained weight and look worse, by complimenting weight-loss, this becomes an unspoken message our brains are constantly absorbing.

What happens when a friend is trying hard to lose weight and wants you to notice? This can be tricky, agrees Baker. “If a friend invites you to comment positively on their weight loss, that’s something you might be able to do. Just say, ‘You look amazing’, support them and recognise their achievement – but I wouldn’t have it as a carte blanche that you comment on anybody’s appearance without being invited.

“But it is very difficult – because they then might comment on you. If they say, ‘I’ve lost two stone’, and you say, ‘Wow you look great’, then they might want to return the ‘compliment’. But you can still use your stuck record response,” Baker adds, “and say, ‘Well I don’t really talk about diets and body shape’ and move it on to a different topic.”