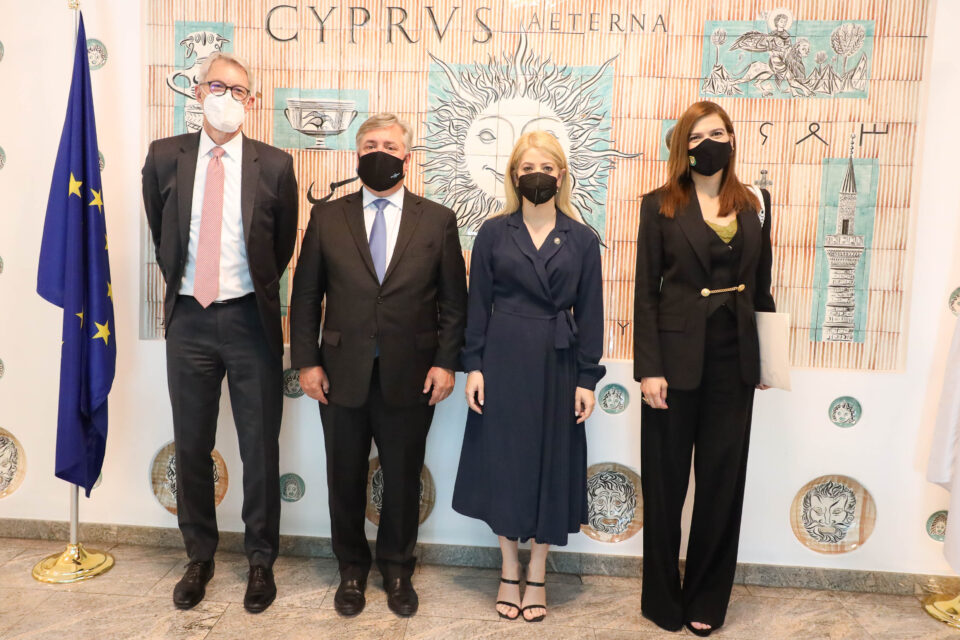 By Elias Hazou and Nick Theodoulou

Oil major Chevron and the Cyprus government said on Thursday they are committed to speeding up development of the offshore Aphrodite gas field, with a new well to be drilled in the first quarter of 2023.

The move was announced following a meeting between Energy Minister Natasa Pilides and President of Chevron Middle East, Africa, South America Exploration and Production Company Clay Neff as Russia’s invasion of Ukraine and the disruption to energy supplies have left Europe scrambling to find alternative sources of natural gas.

Chevron is also in the process of finalising the optimisation of the Aphrodite field’s development concept, through possible cooperation with other facilities in the region, “thereby recognising the importance of Eastern Mediterranean gas resources,” a joint statement read.

“Moreover, taking into account the prevailing energy environment and the potential for Cyprus and the wider Eastern Mediterranean to significantly contribute to Europe’s security of supply and diversification of sources, both parties remain committed to continue working together in order to expedite the timing of first gas from Aphrodite to Egypt and to European markets.”

Natural gas in Aphrodite, lying southeast of Cyprus, was discovered in 2011. It is estimated to contain about 4.5 trillion cubic metres (tcf) of gas, but it is untapped.

Part of the delay in developing it lies in that a small part of the field stretches into Israel’s maritime zone.
Chevron are partners in the Aphrodite field with Shell, and Israel’s NewMed Energy, formerly known as Delek Drilling.

The gas play was operated by Noble Energy until Chevron acquired the company back in 2020. Before it was acquired by Chevron, Noble was granted an exploitation license and the approval of the development and production plan for the Aphrodite offshore gas field. The first gas was expected to start flowing in 2025. This was in November 2019.

The development plan then envisioned the deployment of a newbuild floating production facility at the Aphrodite reservoir, with an estimated maximum production capacity of approximately 800 million cubic feet per day, through five production wells at the initial stage, and export of natural gas to the Egyptian market.

Speaking to the media later, Chevron’s Neff said they believe the Aphrodite project “can significantly contribute to supplying natural gas to the region and beyond… it’s extremely important to have accessible and reliable energy, and we believe Aphrodite will play a part in this future.”

For her part, the energy minister said the new drilling will involve an appraisal well – the second at the Aphrodite site.

Pilides said that there are now four scenarios for developing and monetising Aphrodite – but she declined to elaborate when queried by journalists, citing confidentiality agreements.

She did however disclose that these scenarios have to do with linking the reservoir to already existing infrastructures in the area, or to connecting Aphrodite to the Ikdu LNG terminal in Egypt.

Pressed further, the minister said that in relation to the nearby Leviathan gas field, both options remain on the table – a standalone development for Aphrodite, or joint development with Leviathan.

Pilides also said the government and Chevron agreed to finalise the development plan by year’s end or the beginning of 2023 at the latest.

“Once that happens, we’ll be able to move forward with discussions about marketing [the gas], as this is a key point in finalising the timeframe for when the natural gas will be available.”

The minister demurred when asked to comment on US media reports about a second appraisal well at the ‘Glaucus’ site in Block 10. She said Exxon Mobil – which holds the concession – may not need more follow-up drilling there, instead making use of seismic data it is currently processing.

In February 2019 Exxon and their partners in the block Qatar Petroleum announced the discovery of 5-8 trillion cubic feet (tcf) of natural gas at the ‘Glaucus-1’ site. However subsequent work at the site suggested these amounts were inflated.

Pilides even suggested that Block 5 – also licensed to Exxon – may hold more promise than Block 10.
“Certainly in the coming years a new drill will be needed, possibly in Block 5 rather than in Block 10,” she said.

Blocks 5 and 10 are adjacent to each other.

Man jailed for 11 years for 3.6 kilos of cocaine