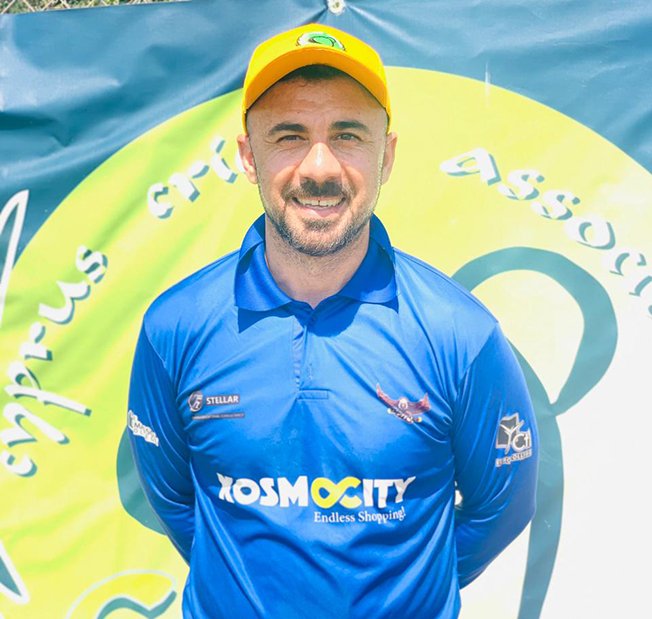 Mike Kyriakou hit 58 opening the batting and then took four wickets, held two catches and effected a run out, to earn himself the man of the match award

Cyprus Eagles CTL played their first game in the West group of the CCA #BAOFinancial T20 Cup, and gained a hard-fought win over Limassol Moufflons.

The match was something of a personal triumph for Mike Kyriakou, the long-serving captain of Fellows CC. With Fellows unable to raise a team for this season, he and a few team-mates were recruited by wily Eagles skipper Murali Alanki, and the move paid immediate dividends as Kyriakou hit 58 opening the batting and then took four wickets, held two catches and effected a run out, to earn himself the unchallenged man of the match award.

With valuable help from Murali (28) the Eagles totalled 175 for 9, but the junior Moufflons team gave them a fright by reaching 159, thanks to Zeeshan Ali’s 37 and a valiant last-wicket partnership between Waleed Ahmed (38 not out) and Gagandeep Singh (18) which brought the final scores closer than appeared likely.

Limassol Qalandars have made a great start, winning both their opening games. On Sunday Amdocs were their victims by 41 runs. Faizan Ahmed (58 not out) and Atik ur Rehman (27) were the main contributors to Qalandars’ 150 for 9, with Avinash Rane the leading Amdocs bowler with 3-22.
In reply Amdocs struggled to 109 for 8, with the same two players also contributing with the ball – Faizan 2-18 and Atiq 2-16 – while their colleague Parshant Kumar took 3 for 20. Qalandars will now be looking to push on and make a real impact on the competition.

The Cyprus Moufflons were made to work hard for victory by a spirited Limassol Bangladeshis side who bowled and fielded well to restrict the senior Moufflons team to 154 for 8. Zeeshan Butt led the way with 46, supported by 27 apiece from Mehran Khan and Gurdeep Sharma.

For the Bangladeshis Jowel Mia scored 36 but did not find enough support as the team was bowled out for 131, leaving Cyprus Moufflons, who have also won both their first two matches, the winners by 23 runs.
This coming Sunday (July 4) there will be six matches played, as the East group starts at the refurbished Lakatamia stadium.

This coming Sunday (4 July) there will be six matches played, as the East group starts at the refurbished Lakatamia stadium. The fixtures are:

Coronavirus: reinstating SafePass outdoors would be ‘setback’ for hospitality venues