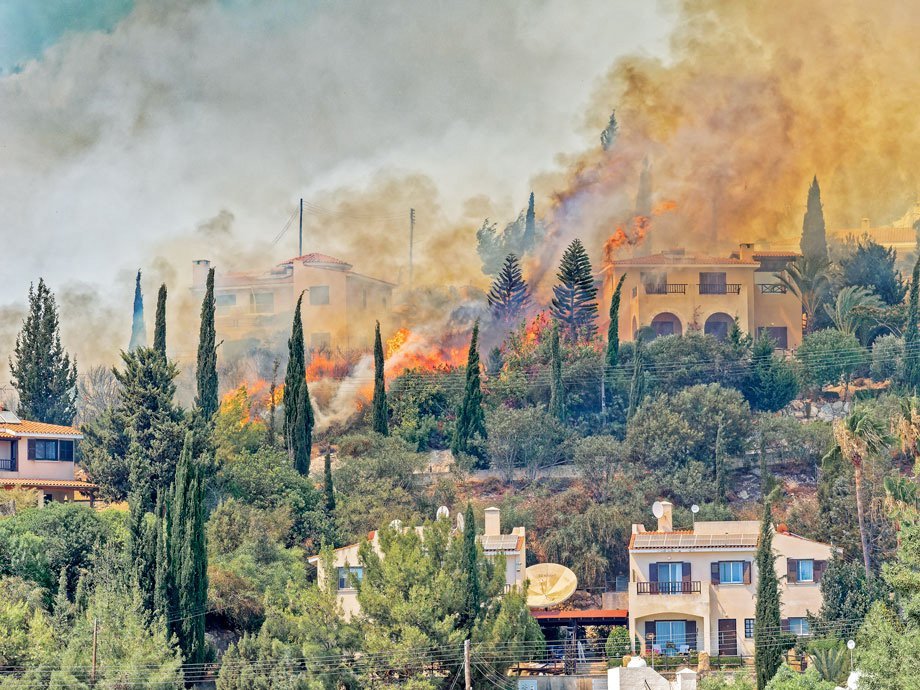 Fire reaches up to homes in Tala in June (Terrot photographic)

The Mediterranean has become a wildfire hotspot with huge fires raging in Turkey and Greece this week and in Cyprus just last month, all fuelled by an intensive heatwave which scientists are saying will become ever more frequent.

During the past days Cyprus has recorded the highest temperatures this year, and yellow, orange and even red heat warnings for some areas as well red fire alerts have been issued time and time again.

Senior meteorology official, Panayiotis Michael, told the Cyprus Mail this week that the average summer temperature for the past four years has been 39C, two degrees over the seasonal average of 37C.

Michael said that, in line with the guidelines by the World Meteorological Organisation, the summer seasonal average for the period between 1991 and 2020 is to change to 38C to better reflect the changing weather patterns of the past decades. During the period from 1961 to 1991, the average was 36.6C.

A new evaluation is done only every 30 years because fewer years mean one cannot make assumptions about change, forecaster at Kitas weather portal Eric Kitas explained.

“Climatologically speaking, we are 30 years behind. During 30 years, most extreme weather conditions occur which are needed to update the statistics. Anything less is not representative. It is not only about high and low temperatures but also about humidity, rainfall and wind.”

According to met office statistics, in July this year, the temperature topped 40 degrees five times, and the average highest temperature for the month was 38.1. In 2020, the number of days with temperatures higher than 40C was eight, and the monthly average recorded was 38.6.

The 2020 figures also show the hottest days were during the last days of July and the first days of August. This week saw temperatures officially reach 44C inland.

Cyprus is also one of the countries cited in a recent scientific study for reporting their hottest-ever temperatures in the last two years and the study concludes more such extremes are coming.

In the next three decades, “record-shattering” heat waves could become two to seven times more frequent in the world than in the last 30 years, scientists reported in a study published on July 27 in the journal Nature Climate Change.

Beyond 2050, if current greenhouse gas emissions trends continue, such record-breaking heat waves could be three to 21 times more frequent, the study found.

Even with the records seen in 2021, “we haven’t seen anything close to the most intense heat waves possible under today’s climate, let alone the ones we expect to see in the coming decades,” said co-author Erich Fischer, a climate scientist at ETH Zurich.

For the study, the researchers used climate modelling to calculate the likelihood of record-breaking heat that lasted at least seven days and far surpassed earlier records.

“Every time record temperatures or precipitation go well beyond what we’ve experienced during our lifetime, that’s usually when we’re unprepared and the damage is largest,” Fischer said.

But for Kitas, climate change alone does not by any means explain all the reasons behind the increased temperatures.

“Cities are hot spots or what is called hot islands,” he noted. “Especially Nicosia has grown considerably in size in the past decades and more concrete from roads and buildings means there are [localised] temperatures of 42C and even 45C. These localised statistics influence the overall measurements.”

To get a better picture, he added, he would rather look at Prodromos, a village which has not increased much in size over the years, and as a result the summer temperatures also have not gone up much.

Meanwhile, the danger of larger bush fires is going to increase dramatically in all rural areas for several reasons not all related to climate change, the weather expert told the Sunday Mail.

For one, there is a lot of dry, flammable vegetation around, due to the rainy winter seasons two and three years ago. Dry grass which usually grows up to 50 centimetres has reached a height of around one metre in many places – and a lot of it is still around.

Once a bush fire gets larger, it is more difficult to stop and develops its own dynamics, with more heat and stronger winds.

Though one might think the coronavirus helped, as fewer people have been driving around, this is not the case, but the virus has instead been instrumental in worsening the situation, Kitas explained.

Under normal circumstances, people would have removed some of the flammable material, at least around their houses and farms.

“During early spring most people who own a piece of land in the countryside would clean their property but this year they didn’t. In Tala for example, houses were burnt this year because most are owned by British nationals who haven’t been able to come to Cyprus since last year.”

Elsewhere, the presence of more people in rural areas has meant a higher chance someone may accidentally start a fire.

“During the summer period, many Cypriots usually travel abroad, this year many stay in their villages and the mountains. Also, people with holiday homes are more likely to stay there with a few friends instead of staying at a hotel at the beach.”

Fewer cars have been on the roads, but this is not good news in terms of fires either, he added.

“Lately, there have been cars on fire while people were driving. That is because the cars have not been serviced and taken care of during the lockdown. When they are barely used they still need oil change and service, otherwise problems with these vehicles increase over time.”

This latter point is not just his opinion, but has been confirmed by Nicosia-based road and towing services company Shiahini, whose mechanics are extremely busy these days.

Winters will also be more disasterous, as urbanisation does not only account for an increase of fires, but also means more flooding in other seasons.

“Where some years ago 50 millimetres of rain would cause flooding in some areas in Limassol, it may take only 25 now. Because of all the concrete covering the surfaces, the water has nowhere to go,” Kitas concluded.

Even Adam and Eve were awarded the right to be heard

Pandemic of the unvaccinated and economic consequences