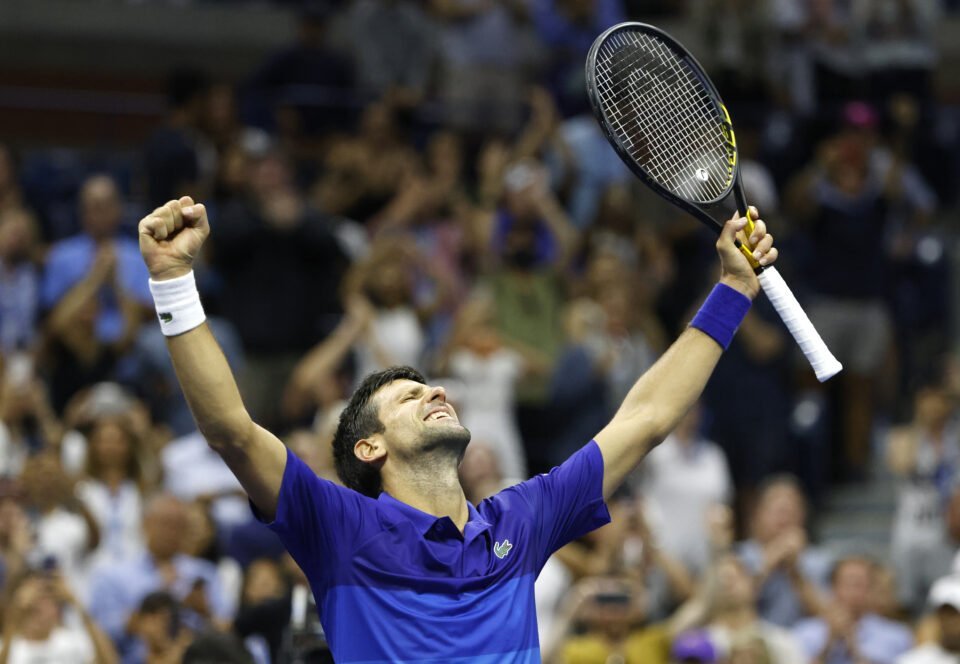 epa09452496 Novak Djokovic of Serbia celebrates after defeating Jenson Brooksby of the US during their match on the eighth day of the US Open Tennis Championships the USTA National Tennis Center in Flushing Meadows, New York, USA, 06 September 2021. The US Open runs from 30 August through 12 September. EPA-EFE/JASON SZENES

An out-of-sorts Novak Djokovic scraped his way to a 1-6 6-3 6-2 6-2 win over American wildcard Jenson Brooksby on Monday to move into the U.S. Open quarter-finals and three wins from tennis immortality.

Chasing a 21st major that would seal a calendar year Grand Slam, Djokovic had difficulty getting into gear against the 99th ranked Brooksby, who for a moment looked capable of derailing the Serb.

For the second consecutive match the world number one came out flat and dropped the opening set, something he will not want to do in his quarter-final when he faces Italian Matteo Berrettini in a rematch of the Wimbledon final which he won in four.

The sixth seeded Italian will mark a big step up in quality for Djokovic, who has not faced anyone ranked inside the top 50, including a qualifier and a wildcard.

“I’ve played him quite a few times on different surfaces, I know what to expect.

“We’re going to play the third Grand Slam in a row against each other.

“Hopefully the result will be the same like the previous two.”

The match got off to an extraordinary start as Brooksby took the first set with shocking ease.

Playing for the first time on Arthur Ashe Stadium against one of the all-time greats, Brooksby was unfazed while three-times champion Djokovic sprayed shots helter-skelter, committing 11 unforced errors to just one by the young American.

“I must say that wasn’t a great start for me, obviously,” said Djokovic. “It’s different stepping out on the court first time against someone that really has nothing to lose.

“He’s a young, talented player that is very crafty.

“He’s got the really all-around game. He was pumped.

“He played a perfect first set. Everything he intended to do he executed it perfectly.” That was the wake-up call Djokovic needed and he broke Brooksby at the first opportunity in the second set, letting out a mighty roar.

Djokovic would win the second but the 20-year-old American made him work for every bit of it, particularly in a grinding fifth game that lasted close to 20 minutes before Brooksby would get the break.

The last American man standing and coming off his first ever five-setter, Brooksby began to fade in the third, going down a double break as Djokovic finally began to dial in his game.

Leading 2-1, Djokovic continued to improve in the fourth and moved clear with a double break and offering zero break point opportunities to his opponent before sealing the win.

“The third and fourth set were really, really good from my side. I felt I was more dominant,” said Djokovic. “Was a good finish. It wasn’t a good start.

“But all in all, expected a battle, and I got that one.”

Highlights of the eighth day at the U.S. Open, the last Grand Slam tournament of the year, at Flushing Meadows on Monday (times in GMT):

Czech fourth seed Karolina Pliskova returned to the U.S. Open quarter-finals for the first time since 2018 with a 7-5 6-4 victory over Russian 14th seed Anastasia Pavlyuchenkova.

Harris fired 36 aces compared to Opelka’s 24, while winning 92% of his first-serve points, as he reached the quarter-finals where he faces fourth-seeded German Alexander Zverev.

2010 RADUCANU THROUGH TO FIRST MAJOR QUARTER-FINAL

British teenager Emma Raducanu extended her fairytale run at the U.S. Open with a 6-2 6-1 victory over American Shelby Rogers to reach the last eight of a Grand Slam for the first time, where she will meet Olympic gold medallist Belinda Bencic.

Worldwide IT Spend moves to the ‘next normal’ — Analyst