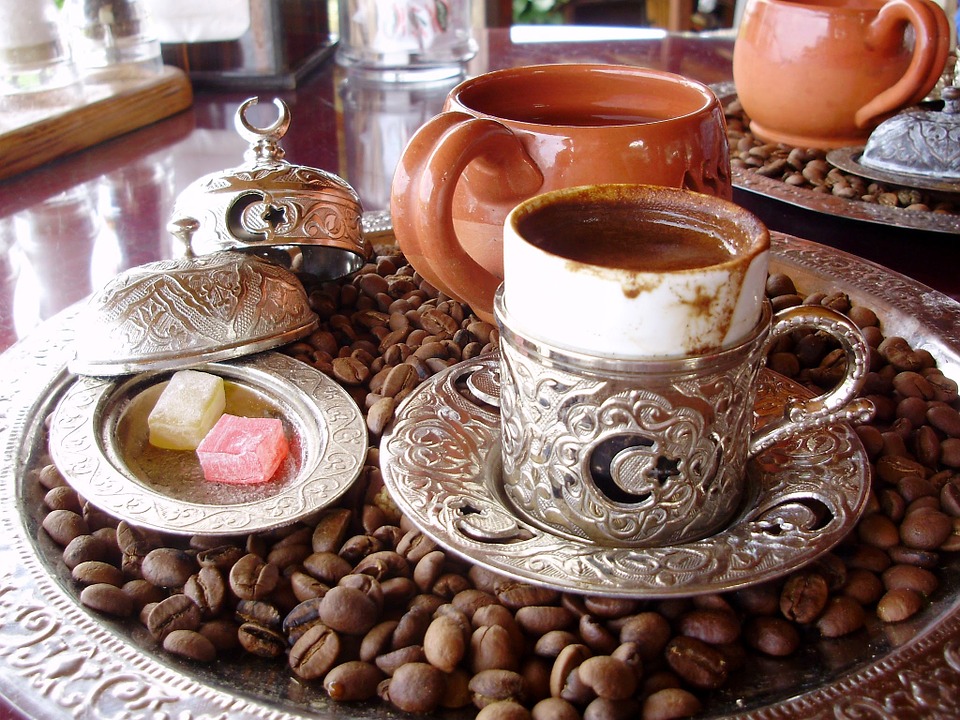 Apologies to Patroclos for encroaching on coffeeshop territory.  I’ve been meaning to write a novel called Turkish Coffee as a metaphor of the conflict between Turks and Greeks for years but procrastinated and then got bored with my subject and lost interest.

Everyone has a novel in them but not everyone has the enthusiasm and discipline required to write one whereas an article limited to the coffee controversy is easier even though normally I prefer English tea to coffee as my all-day beverage.

Tea is grown in India among other places but what makes tea English is the addition of milk and sugar to taste. My favourite is called builders brew which is strong Yorkshire tea with two sugars.

Turkish coffee here in London is drank either at home or in restaurants after a meal and the controversy surrounding it depends on the nationality of the restaurant. Personally, I don’t care what people call their national coffee so long as it tastes like Turkish coffee. The generic name for it derives from the method ground coffee was brewed in the Levant in Ottoman times – slowly bringing roasted ground coffee to the boil in a pot of water called ibrik with or without sugar. The coffee bean from which it is ground is African and so it is the way coffee was brewed that was labelled Turkish because the Levant in those days was part of the Ottoman Empire.

One other characteristic of coffee made this way is that the muddy sediment left in the coffee cup can then be tipped into the cup’s saucer for one’s fortune to be told from the meanderings left behind in the coffee cup. Fortune telling is an art form called tassology or tasseography that requires imagination, creativity and the gift of the gab – your luck is good but your fate is not so good is the most meaningful and imaginative fortune I was ever told from a cup

Turkish coffee became Greek coffee for Greek people after the war in Cyprus in 1974 just like French fries became freedom fries after France refused to back America’s attack on Iraq in 2003 – although so far as I know French wine remained stubbornly French.

Presumably, many Greeks and Greek Cypriots did not like calling something they enjoyed every day Turkish, which is a touch petty but in a free society people are free to call the beverage they drink what they like.

I was first confronted with the coffee controversy in a Greek restaurant in north London in October 1974 when I asked for Turkish coffee and was promptly told by the waiter that I meant Greek coffee surely! When you order coffee you do not invite an argument so I corrected myself, drank it, paid the bill and departed. However, I left no tip not because I minded terribly asking for Greek coffee, but as a mark of displeasure at the waiter’s impertinence.

The diplomatic way round the controversy is to order your coffee by reference to how sweetened or unsweetened you like it, which is actually how we always asked for coffee in Cyprus: sweet, medium or no sugar – glyki, metrio or skettos in Greek tatli, orta or sade in Turkish. I take mine medium with a thick light brown froth on top, which I used to enjoy enormously with a couple of Assos Papastratos untipped oval cigarettes – the kind Archbishop Makarios smoked.

Another experience with coffee worth a mention was when I had coffee with a Turkish Cypriot politician who served me Turkish coffee in a Greek coffee cup – if memory serves it read Byzantine coffee.  When I pointed this out to him he was nonchalant – so what, he said, it is still Turkish coffee!  Nevertheless, I sense that culinary patriotism is very strong among Turks who feel the coffee controversy very keenly indeed.

In her recent novel Island of Missing Trees, about the raw emotions that persist among Cypriots, the Turkish novelist Elif Shafak, initially avoids the coffee controversy. In the full a la carte menu of the Happy Fig Tavern that features in her novel the first hot beverage on offer is Cosmopolitan Coffee.  However, near the end she concedes through one of her characters that even among Turks empathetic to foreign cultures, the label Greek coffee is infuriating.

For some unknown reason, tea does not attract the same controversy even though black tea sipped from small tulip shaped glasses is ubiquitous in Turkey.  Apparently, all teas originate from China; even tea from the Assam province in India was originally transplanted by the British East India Company from China. The Chinese tea you normally get in Chinese restaurants is Jasmine tea but to the Chinese all the tea from China is Chinese.

There is something exotically attractive about the food and drink of enemy nations because like music you can love it even though you are at war – I am sure the high-brow Brits continued to enjoy Beethoven, Mozart and even Wagner while they were at war with Germany last century. During the Cold War Russian caviar and Russian vodka were popular in Britain precisely because they were called Russian even though Soviet Russia an enemy country. The same applies to frenemy countries like France. French wine, bread and cheese will always be French in England.

Different considerations apply to a full English breakfast which is labelled Irish in Ireland and Scottish in Scotland: almost the same ingredients but same taste, different nations.

Tales from the Coffeeshop: The oldest trick in the presidential book