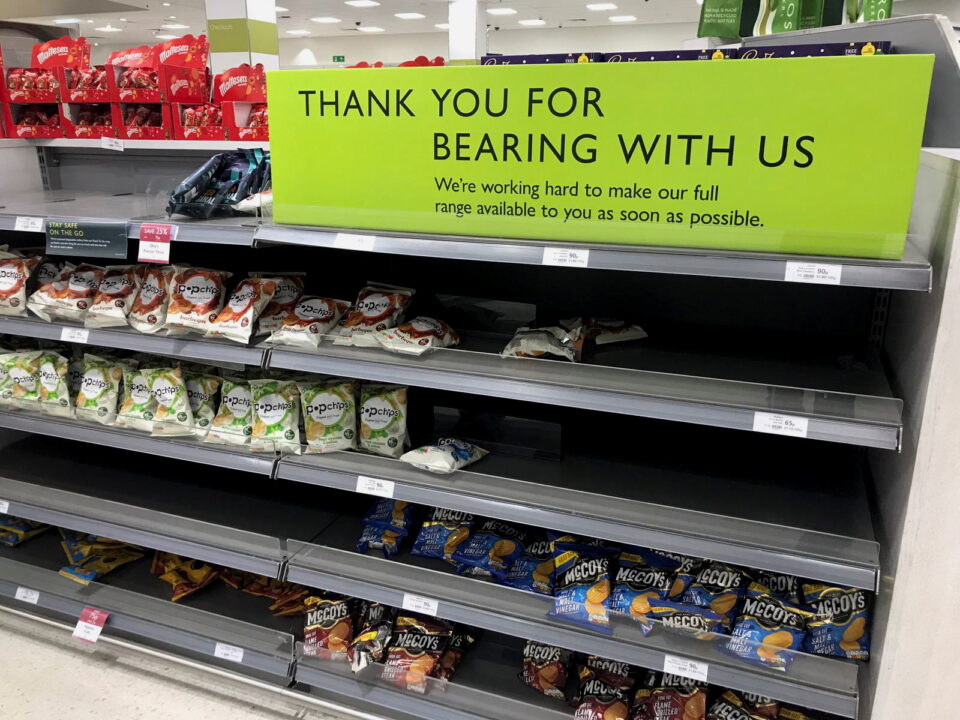 After enduring panic buying at the fuel pumps and soaring heating prices, the British must now brave a new shortage: crisps, or potato chips, one of the country’s favourite snacks.

Crisp shelves in supermarkets and shops across the land have been left bare after an IT system upgrade at Walkers, Britain‘s biggest producer. The deficit could last weeks.

Walkers, owned by PepsiCo, said although issues around the system upgrade had been fixed, factories will not ramp up to close to full production until towards the end of November, meaning reduced volume and range at retailers.

“A recent IT system upgrade has disrupted the supply of some of our products. Our sites are still making crisps and snacks but at a reduced scale,” said a spokesperson for Walkers, which is based in Leicester, central England.

“We’re doing everything we can to increase production and get people’s favourites back on shelves. We’re very sorry for the inconvenience caused.”

Walkers is prioritising production of its most popular crisps flavours, including Cheese & Onion, Ready Salted and Salt & Vinegar, as well as Quavers and Wotsits from its snacks range.

But shortages of Walkers crisps have pushed consumers to buy other brands, thus emptying shelves in a year that has seen supply chains strained by a post-Brexit shortage of truck drivers and the global supply hiccups caused by COVID.

In August, McDonald’s pulled milkshakes and bottled drinks from its menu, and fellow fast food chain Nando’s shut around 50 sites due to staffing shortages in its chicken supply chain.

Crisps are one of Britain‘s favourite snacks, popped into packed lunches for children, gobbled alongside pints in pubs, or eaten semi-secretly on sofas as a condiment to television drama.

The British gorged on such quantities of snacks during COVID-19 lockdowns that the government sponsored advertisements beseeching people to eat more healthily.

On average people in Britain eat around two 25-gram bags of potato crisps per week, and 141,000 metric tonnes of crisps are sold each year in the country, according to data from market researcher Kantar.

“I’m upset: now I have to go out shopping again,” said Carole Moore, a 69-year old pensioner from Plaistow, east London, who was searching for crisps on an empty aisle at Tesco , Britain‘s biggest supermarket group.

Moore, shopping for a bonfire night party of 22 people, was unable to find any multipacks of her favourite Prawn Cocktail and Salt & Vinegar crisps at the Tesco superstore in Beckton.

The invention of crisps in the early 19th century is a subject of historical dispute, with various legends and claimants on both sides of the Atlantic.

By the 20th century, crisps had become big business. Walkers was founded in 1948 in Leicester by a local butcher who switched to crisps from meat due to post-World War Two rationing.

Azeri national and five others referred for trial