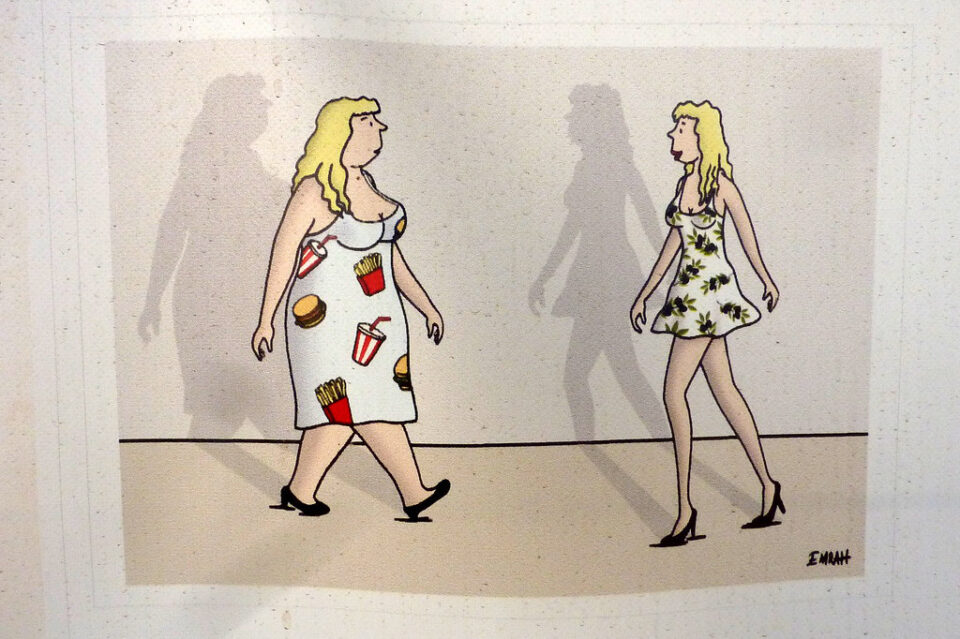 Political cartoons and memes have made it clear that if there’s something to agree about on all sides of the political spectrum, it’s that fat people are an easy target.

At the beginning of the vaccine rollout, a political cartoon was circulated that pictured a thin, vaccinated person, trying to reach herd immunity but unable to do so because of the ball and chain on his ankle; a fat man who had “anti-vaxxers” written on his back.

Now that the pandemic has dragged on, those who are against mask mandates have circulated a cartoon that pictures a pro-mask and presumably pro-vaccine fat person who uses a mobility aid, asking the thin person wear a mask to protect their health.

What’s a person who is against fat loathing to do?

These “comedic stigmas” are not limited to political cartoons; they are pervasive on television and across various forms of media.

Fat loathing often goes under the radar in supposed “progressive” left circles, where those might think of themselves as holding higher moral ground for body positivity and for being pro-diversity. However, most anti-fat cartoons are from “progressive” pro-vaccine and pro-science viewpoints.

Left-leaning politics consistently hold up fat people as the harbingers of difficult times and environmentalists disproportionately lump them as the cause of climate change. They are represented as an embodiment of animal cruelty by PETA — marginalizing fat vegans who want to join the movement.

How can fat people, as well as critics of fat loathing, be expected to align with political movements using rhetoric that maligns their bodies?

Fat loathing has crossed political divides for over a century in the United States. In her book, Fat Shame: Stigma and the Fat Body in American Culture, Amy Farrell details how both sides of women’s suffrage portrayed their opponents as fat over a century before any “obesity epidemic” was created through shifting and flawed BMI designations.

Proponents of suffrage portrayed themselves as slight, whimsical and feminine while those who opposed were portrayed as old, fat and sour-faced. These cartoons sent the message that if women got the vote, they would still be feminine and proper white mothers.

Opposition cartoons went in the reverse: pro-suffrage women were portrayed as large, muscular and domineering (they don’t need the vote — they already have too much power in the home!).

Some of these cartoons even represented suffrage proponents in ways that evoked blackface, implying that white women garnering the vote would upset racial hierarchies. When white women get the vote, the story goes, it will upset gender roles, understood as women getting big and fat, signifying an evolutionary backslide.

These representations and those related to COVID-19 demonstrate who is considered “fit” for a nation’s progress. In this case, progress is how people properly navigate the pandemic.

Political rhetoric, as demonstrated in cartoons, focuses on who’s a trustworthy citizen acting in the best interests of the nation. Fat is not just a shorthand for being misinformed or ignorant, it pertains to whose bodies are considered ideal and who should reproduce to produce more citizens.

Think of high-profile politicians who have disagreeable ideas. They are consistently portrayed as fatter than they are as a way of demonstrating that they are not “fit” for citizenship, the nation, or respectable public debate.

It should be possible to point out the problems behind fat loathing without being politically aligned with the person whose body is being lampooned. One doesn’t need to think too deeply to conjure fat politicians whose ideas they disagree with — but, should people keep silent about these rhetorical techniques?

Fatness has also been used to signify other “disordered desires” that need to get back under control through proper discipline. Community health researcher Lynn Gerber’s book, Seeking the Straight and Narrow: Weight Loss and Sexual Reorientation in Evangelical America, details how conversion therapy and weight-loss movements of the mid-20th century had overlapping goals to punish appetites for both food and sex on the grounds that fatness and queerness offend a particular interpretation of a Christian God.

Given these connections, many people who would consider themselves pro-sexual diversity would never think that diet and weight-loss industries are connected. Yet gay men have significantly higher levels of bodily dissatisfaction than straight men, and fat loathing in political cartoons continues to be a way to lampoon anti-gay politicians.

Representation matters in forming political solidarities. These issues require attention that will only come about if fat people are empowered to critique the very groups so willing to instrumentalize their bodies for political gain.

Workshop brings to life the art of the Phini chair