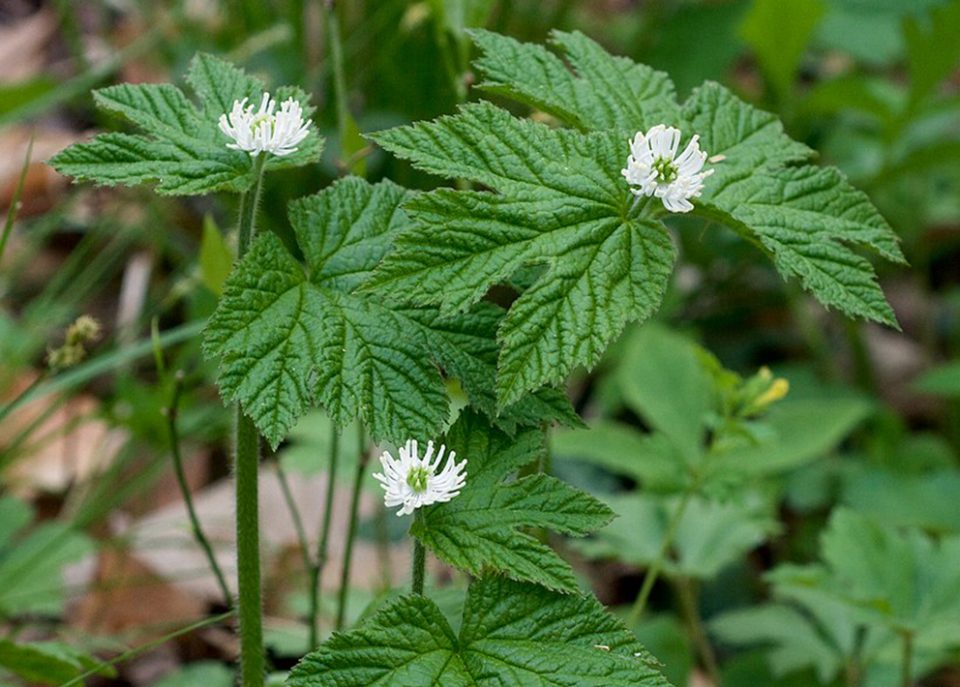 Habitat: A perennial member of the Ranunculaceae family, growing to about 30cm in temperate woodland. Originally native to North America, it can now be found growing in any of the temperate regions. It has a thick yellow rhizome which throws up a single flowering stem that produces five-lobed, deeply-veined, serrated, palmate leaves that resemble those of the horse-chestnut and display green/white flowers.

What does it do: This is one of the world’s most popular herbal remedies – traditionally used as a cure-all by the native plains tribes of America, it was so valued by early white settlers, that they nearly scavenged it to extinction.

Goldenseal contains the valuable alkaloids hydrastine, berberine, berberastine and canadine. This makes it alterative, choleretic, antiseptic, anti-inflammatory, anti-microbial, bacteriostatic, diuretic, haemostatic, laxative and a powerful liver and stomach tonic. In addition, it increases the blood supply to the spleen, and is a valued detoxifier.

One of the reasons why it was so popular with the early settlers is that before the advent of antibiotics it was used to treat infections of the reproductive organs such as gonorrhoea, syphilis, giardia, trichomonas, soft canker, candida and chlamidia. It has recently been discovered that the berberine action against some of these pathogens is actually stronger than the antibiotics commonly prescribed to combat them. For example, berberine’s action in inhibiting candida prevents the overgrowth of troubling yeast that is a common side effect of antibiotics.

Other applications of berberine and hydrastine alkaloids are for treating infections of the mucous membranes, parasitic infestations of the gastrointestinal tract, inflammation of the gallbladder and most recently, cirrhosis of the liver.

Goldenseal, like Echinacea, has a long history of remedying colds and flu symptoms.

Currently herbalists recommend the herb for ulceration of the throat, mouth and intestines, chronic dyspepsia, diverticulosis, ulcerative colitis and liver damage. It is used in old peoples homes to ease bodily functions that are impeded by the ageing process.

Goldenseal is applied topically to treat ringworm and eczema. Native Americans used it to hasten delivery in childbirth.

Recent research suggests berberine has an important role in the treatment of some cancers.