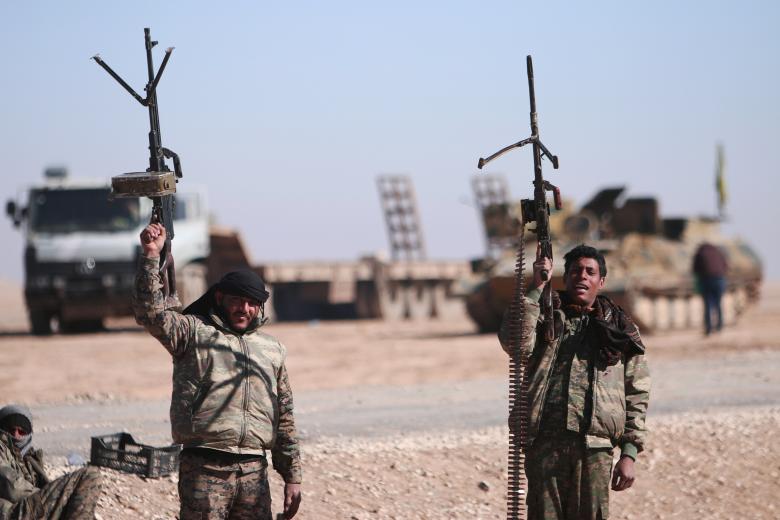 Syrian Democratic Forces fighters hold up their weapons in the north of Raqqa city, Syria

US-backed Syrian militias said on Friday they were strong enough to seize Raqqa from Islamic State with support from the US-led coalition, underlining their opposition to any Turkish role in the planned attack.

The campaign against the city, Islamic State’s Syrian base of operations, is gathering pace as Iraqi forces press ahead with their efforts to recapture Mosul, the jihadists’ base in Iraq. The overlapping US-backed campaigns threaten to deal Islamic State (IS) a double blow.

Iraqi state TV said about half of western Mosul had been taken. Iraqi forces dislodged the militants from the eastern part of Mosul in January, after 100 days of fighting to reclaim the city seized by the jihadist group in 2014.

The Raqqa campaign received a boost in recent days with the deployment of a US Marines artillery unit, adding to the several hundred US special forces already in Syria supporting the operation backed by air strikes from the US-led coalition.

The Syrian Democratic Forces, the main US partner in Syria, this week cut the road from Raqqa to Islamic State’s stronghold in Deir al-Zor – the last main road out of Raqqa, and declared it would reach the city limits within a few weeks.

NATO member Turkey is deeply concerned by the influential role of the Kurdish YPG militia in the SDF, and is pressing Washington to take part in the operation itself. Turkey views the YPG as a threat to its national security.

Underlining the SDF’s determination to press ahead, a spokeswoman said on Friday it had enough fighters to take Raqqa.

“The number of our forces is now increasing, particularly from among the people of the area, and we have enough strength to liberate Raqqa with support from the coalition forces,” Jihan Sheikh Ahmed said in a statement.

The SDF, which includes YPG-allied Arab groups, says it ruled out any Turkish role during meetings with US officials last month. Turkey says no decision had been made yet on who would carry out the final assault. The US-led coalition said a possible Turkish role remained a point of discussion.

Turkey views the YPG as an extension of the Kurdistan Workers Party (PKK), which has fought an insurgency against the Turkish government for decades. The YPG controls swathes of northern Syria, where it has battled IS for several years.

“We have information that the enemy is moving part of its leadership outside the city, as it is also digging tunnels under the ground. We expect they will fortify the city and the terrorist group will depend on street warfare,” Ahmed said.

Islamic State is also being fought in northern Syria in separate campaigns by the Russian-backed Syrian army, and by the Turkish army and Free Syrian Army rebel groups Turkey backs.

Islamic State has withdrawn from swathes of northern Syria in the last few weeks, a sign of the strain the group is under in both the Syrian and Iraqi halves of its self-declared “caliphate”.

“For many months the Coalition has been working to enable simultaneous, or overlapping operations,” US Air Force Colonel John Dorrian, the spokesman for the US-led coalition, told Reuters.

“Conducting operations to isolate and liberate Raqqa while also working to liberate Mosul presents the enemy with more dilemmas than their command and control capabilities can manage,” he added in emailed comments.

US-trained CTS units battled sniper and mortar fire, often moving from house to house, reaching the Aamel district of western Mosul on Friday, in a push to tighten the noose around Islamic State fighters dug into the old city centre.

“Fighting has entered the first Aamel district today, there was a CTS attack at dawn, and they ran away, retreated,” said Captain Muthanna al Saadi of the CTS 2nd division.

Seif Rasheed, 28, a medic with the CTS unit operating from a house behind the lines in the Shuhada district said it received one dead and one wounded in the early hours of Friday.

“The martyr was shot in the head and the wounded in the neck and hip,” he said. “Daesh (IS) are hiding in homes, opening the doors and firing at troops from just a few metres.”

Supplies to the IS-held parts of Mosul have dwindled over the past week as the army shut the main route westward.

“We used to get potatoes, vegetables and milk from Badoosh, but these areas are no longer accessible,” said a man in Zanjeely district over the phone. “The entire family lives in one room and mortars are falling like rain.”

Girls burned to death under lock and key in Guatemala shelter

Eide says it’s up the leaders, he can’t ‘fix this for them’

Israeli court tells Netanyahu he must appear at start of trial