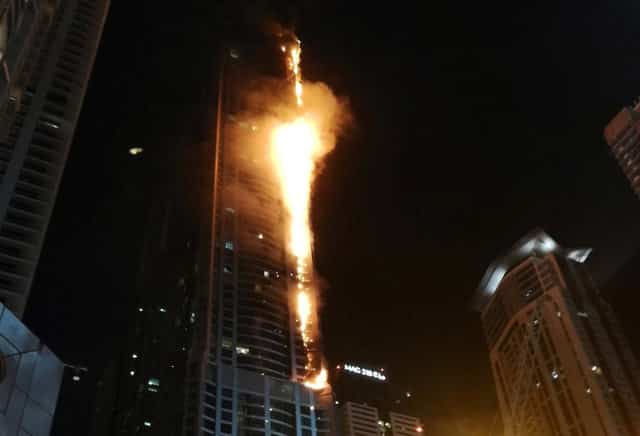 Flames shoot up the sides of the Torch tower residential building in the Marina district, Dubai

A fire ripped through one of the world’s tallest residential towers in Dubai on Friday, the latest in a series of fires in tall structures in the United Arab Emirates, the Gulf’s tourism and business hub, over the past three years.

Flames shot up the sides of the Torch tower in the second blaze to hit the high-rise since 2015, forcing hundreds of occupants to flee as burning debris showered down the sides of the 1,105 foot (337 metre)-tall, 79-storey structure.

“We were sleeping and we woke up to the fire alarm and people screaming. We ran down the stairs and it took us about 10 minutes to reach from the 50th floor,” a resident who gave his name as George told Reuters.

“It was very bad. The fire was very strong at that time, about 1 a.m. Then it started calming down over the next two hours,” he added.

The tower was evacuated, no injuries were reported, and there was no immediate word on the cause of the blaze.

But the incident may revive questions about the safety of materials used on the exteriors of tall buildings across the wealthy Gulf region and beyond.

An investigation by the management of the Torch after its 2015 fire found that most of the damage was to the cladding, exterior panelling used for decoration or insulation.

Police in Britain have said they believe the system of insulation and cladding panels added during a refurbishment of London’s Grenfell Tower may have contributed to the rapid spread of a fire there in June in which 80 people died.

The UAE revised its building safety code in 2013 to require cladding on all new buildings over 15 metres (50 feet) tall be fire-resistant, but older buildings are exempt.

Most of Dubai’s approximately 250 high-rise buildings use cladding panels with thermoplastic cores, UAE media have reported. Panels can consist of plastic or polyurethane fillings sandwiched between aluminium sheets.

Such cladding is not necessarily hazardous, but it can be flammable under certain circumstances and, depending on a skyscraper’s design, may channel fires through windows into the interiors of buildings.

Dubai’s civil defence authorities said firefighting squads put out the blaze around 4.00 am (0000 GMT) and were cooling the building.

Firefighters and police sealed off surrounding streets, which were partially covered by dust and debris.

By 4.00 a.m. the exterior of the building showed no sign of fire as residents and onlookers stood around staring up at the building, according to a Reuters witness.

Another resident, whose gave his name as Mohammed and lives on the 12th floor, said the top part of the tower caught fire first and then lower levels followed as debris fell.

The government said it was working on providing shelter for those affected by the fire.

Dubai is one of seven emirates that make up the UAE, where several residential compounds and hotels have been hit by fire in recent years. In some of those cases, experts said the flames may have been encouraged to spread by exterior cladding.

In August 2016 a fire swept through a 28-storey building under construction in the UAE capital, Abu Dhabi, injuring 13 people, including 10 emergency service personnel.

Earlier that same month, a fire damaged part of a multi-storey building under construction in Dubai and in July 2016 a fire broke out in Dubai’s residential 75-storey Sulafa Tower. On New Year’s Eve 2015, a blaze hit a Dubai hotel.