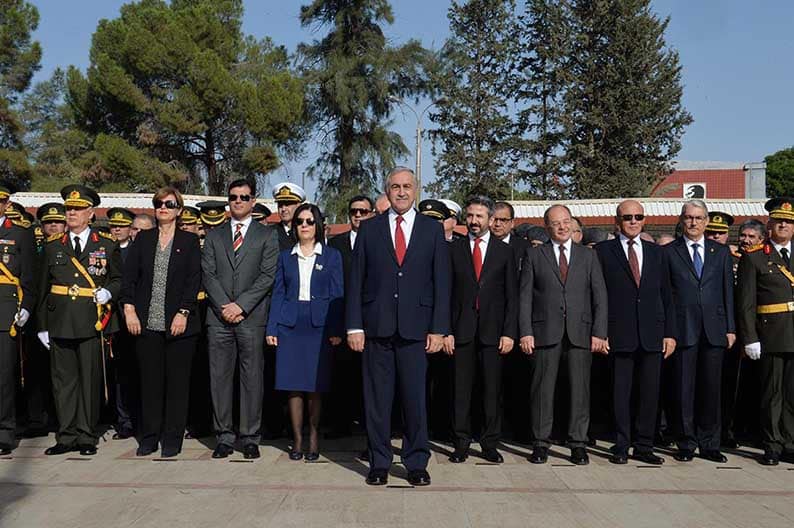 The UDI party is over. The parade and fly past are over too. Until next year when the whole charade will be repeated. When will they ever learn that it is much more effective to talk gently and hide the big stick than to have military parades and fly pasts?

The Turkish Cypriot political leaders were celebrating the anniversary of UDI that was proclaimed on November 15, 1983, so it is a good time to begin a conversation about the so-called Turkish Republic of Northern Cyprus (TRNC) and whether it has served the Turkish Cypriot community well.

My take is that UDI was a huge mistake. It was not done properly. There was no referendum to dignify it as an expression of the right of self-determination that would have made it more acceptable internationally. The right to self-determination is an important principle of international law provided it is expressed properly in accordance with the rule of law. The UN Charter provides that nations should respect the right of peoples to choose for themselves the form and nature of the political society to which they wish to belong. The way that the people choose, however, is by direct democracy in the shape of referendums. Self-determination is not exercised through representatives since the right inheres in the people directly.

The UDI that purported to launch the TRNC was fatally flawed at inception as it lacked democratic credentials. Indeed if the referendum result of 2004 is anything to go by the Turkish Cypriots roundly rejected UDI when they voted overwhelmingly in favour of reunification under a federal umbrella within the EU.

UDI has been a huge legal obstacle that has naturally been latched onto by the Greek Cypriot government to put pressure on the Turkish side – which is fair enough if you think about it, although it is sometimes taken to absurd extremes. The legal obstacle is that both UDI and the TRNC have been condemned by the international community as illegal. In an opinion from a case from South West Africa, the International Court of Justice advised that states have a duty of non-recognition in respect of entities that breakaway unlawfully. In other words it is illegal to have any dealings with them. This is not just a case of not recognising a state but of having an obligation in law not to engage with such an illegal entity directly or indirectly except for the purpose of upholding human rights.

In light of its limited purpose and the fact that the autonomous administration reflected the application of the doctrine of necessity that was applied in the Republic of Cyprus it was consistent with the exigencies prevailing across the whole of Cyprus. According to the legal officers of the Republic of Cyprus “the constitution remained in force and was applied subject to the doctrine of necessity to the effect that as it was impossible for Turkish Cypriots to participate in the government, exceptional measures had to be taken not in conformity with the constitution that were necessary to save the essential services of the state temporarily until the return to normal conditions so that the whole state might not crumble down.”

The corollary to that state of affairs was that the Turkish Cypriots also had to maintain essential services for their community and needed a governmental structure to do this, which many in the international community would say was fair enough. The Turkish Federated State would have gradually found its place in the world as an interim administration with some semblance of constitutional propriety under the 1960 constitution and a modicum of international acceptability that would have prevented the Turkish Cypriot community’s isolation.

In contrast when UDI was proclaimed, it was declared legally invalid by the UN which called for its withdrawal. The EU cannot deal with the Turkish Cypriot administration because to do so would be illegal, and the government of Cyprus is in a good position to ensure the EU complies absolutely with its duty not to deal with an illegal entity.

As the Catalans discovered, you need metropolitan agreement before breaking away from an existing state. This is the way international law works. The Turkish Cypriot community is in the same boat. If it wants to break away it needs the agreement of the Republic of Cyprus.

In the end that is not going to be forthcoming despite loose talk of a plan B in some Greek Cypriot circles, because if Cyprus is partitioned into two states each of them would have to apply to join the EU again. The law is unclear and the decision may ultimately be a political one, but the risk of not being readmitted would be decisive.

The point is that some EU states may not be as amenable this time round. Last time, Greece was able to force the EU to accept Cyprus with its problem by threatening to block enlargement, but this may not be so easy again as Greece is in no fit state to dictate policy these days; and the fact that Cypriot president reneged on his promise to support reunification in 2004 still rankles.

Moreover the EU has issues with Russia. For example Estonia, Latvia and Lithuania are not as enamoured by Russia as the Greek Cypriots are and may block Cyprus’ re-entry given half a chance.

There will not be partition because the Greek Cypriot people are proud Europeans and will not risk losing membership of the EU – for partition of all things! No plan B here Mr. Anastasiades!

On the other side, the TRNC has no useful role to play; indeed, it is more of a hindrance than a help. The Turkish Cypriot leadership rightly complains that its continued isolation is unfair, particularly as they voted yes to a united Cyprus in 2004, and Mustafa Akinci gave it his best shot for the Greek Cypriot community as was consistent with being leader of the Turkish Cypriots.

There was an impasse at Crans-Montana but it is not insurmountable with a little bit of magnanimity and nobility of spirit of which the Turkish Cypriots used to have aplenty. There is only one plan. It is plan A plus.

All quiet on the climate front

Tales from the coffeeshop: Defections and dissidents define electioneering