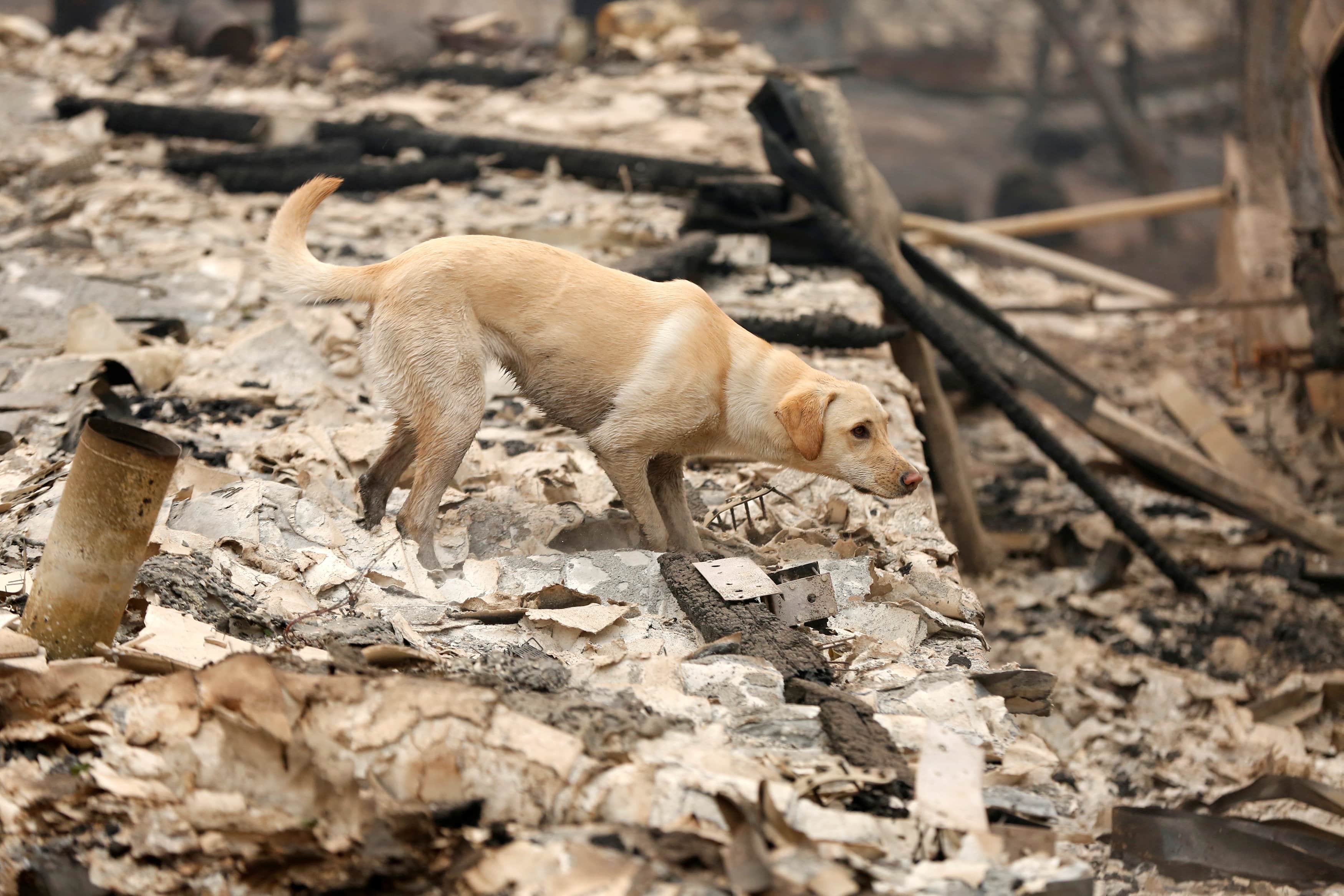 A cadaver dog named Echo searches for human remains in a house destroyed by the Camp Fire in Paradise, California

Emergency services on Sunday sifted through the charred wreckage of California‘s deadliest ever wildfire, searching for signs of nearly 1,000 people believed still missing as crews made progress in bringing the blaze under control.

The remains of 77 people have been recovered, the Butte County Sheriff’s Office said late on Sunday, as it cut the number of missing to 993 from 1,276. It gave no other details.

The Camp Fire broke out in Northern California on Nov 8 and last week all but obliterated Paradise, a mountain town of nearly 27,000 people around 90 miles (145 km) north of state capital Sacramento.

Officials said it had consumed about 150,000 acres and was 65 percent contained late on Sunday, up from 60 percent earlier in the day, as prospects of a heavy rainstorm from late Tuesday onwards raised hopes that that percentage will rise as the week progresses.

They said full containment was not expected until Nov. 30, however.

Up to four inches (10 cm) of rain are forecast to fall north of San Francisco between late Tuesday and Friday, said Patrick Burke, a forecaster at the National Weather Service’s Weather Prediction Center in Maryland.

“This weather system is locked in,” he said.

The rain would also make it harder for forensic teams sifting through ash and dirt looking for the bones of the dead. “The rain will easily disturb the soil where remains might be found,” Burke said.

Pathologists from the University of Nevada, Reno, worked through the weekend as firefighters peeled back debris, collecting bits of burned bones and photographing everything that might help identify the victims.

The storm, which is expected to carry moderate winds of 15-20 mph could also cause problems for evacuees, hundreds of whom are sheltering in tens and cars.

It isn’t clear how many people are in need of shelter but as many as 52,000 people had been ordered to evacuate

“While it isn’t an exceptionally strong storm, the recent burns make mud slides on hills and slopes a real danger,” Burke said.

South of Sacramento near Malibu, at least two inches of rain are expected to fall on a second fire, the Woolsey. Known to have killed three people, it was 88 per cent contained on Sunday and full containment was expected on Thanksgiving Thursday.

The cause of both fires is under investigation, but electric utilities reported localised equipment problems around the time they broke out.

PG&E Corp has said it could face liability that exceeds its insurance coverage if its equipment were found to have caused the Camp Fire.

The lights are on but nobody’s home