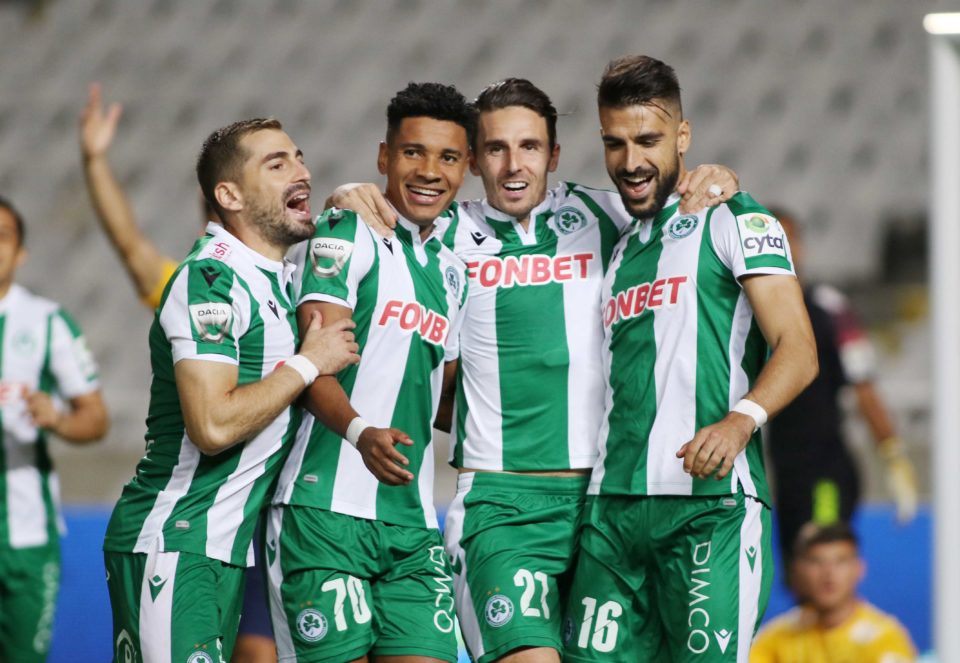 Omonia players celebrate the only goal of the game scored by Matt Derbyshire in the previous game against Apollon, won by the league leaders 1-0.

The football championship resumes this weekend following the festive break with the huge clash in Limassol between third placed Apollon and table topping Omonia while champions Apoel take on relegation candidate Enosis in Nicosia.

In the other games troubled AEK are at home to tough side Olympiakos who will be looking for at least a point that will ease them even further away from the relegation zone while Nea Salamina are at home to Ethnikos Achnas who sacked their coach Yiotis Engomitis over the holiday period after a string of poor results that saw them nosedive from the top half of the table to within a point of the relegation zone.

After a much-troubled start to the season where Apollon sacked and rehired their Cypriot coach Sofronis Avgousti in the space of a month they have now gone from strength to strength gradually clawing their way up to third place.

Despite all this, they still lag Omonia by eight points and a defeat to the leaders will put a serious dent to their championship hopes.

Avgousti will have Zelaya, Marcovic and Gakpe available for selection but a late decision will be made for Emilio Ensoue, Chambos Kyriakou and Hector Yuste with the latter having the least chances of recovering in time for the game.

Omonia’s coach Henning Berg will have to make a decision on who will replace the suspended Michael Luftner with Tomas Hubocan favourite to get the nod ahead of Kousoulos and Katelaris.

Berg’s biggest headache, though, is whether to persist with young Cypriot striker Kakoullis to spearhead his attack or to reinstate to the starting line-up the more experienced (and leading scorer) Matt Derbyshire.

Champions Apoel had lost their way towards the end of last picking up just 4 points from a possible 12.

It was no surprise when they sacked German coach Thomas Doll late last year and replaced him with the Norwegian Kåre Ingebrigtsen. This is Apoel’s third coach since June with Italian Paolo Tramezzani the first coach to be shown the door from Apoel’s hotseat.

Ingebrigsten has been handed a relatively ‘easy’ first game against Enosis Neon Paralimniou but till the end of February his team will play 15 games in all competitions, three times against Apollon, twice against Anorthosis and twice against Basel in the Europa League.

With just six days of training with his new team, the Norwegian will have to rely heavily on the advice of Loucas Hadjiloucas, who was installed as interim manager when Doll had left the club.

One way or another the champions and their new coach are expected start the new year off on the right foot.

Restore, refurnish, relove! Transform your old furniture and give it a new look