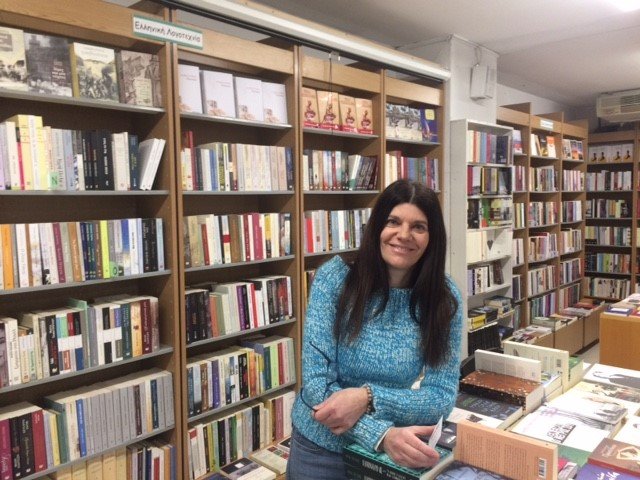 This week the Soloneion bookshop hosted a musical event on its premises for the first time, one of the many changes the shop has undergone over the years. On Friday and Saturday, the shop presented the musical gathering “Cyprus-Crete-Ireland: islands and movement”. It is just one sign of the many changes bookshops have had to implement in order to survive.

The Soloneion is one of the oldest in Cyprus, having evolved from the old Minerva bookshop in Nicosia’s Ledra street which opened in the 1940s, to the Bridgehouse, where it moved in 1969. In 1995 it left for its current location, which meant another name change to ‘Soloneion’.

For much of its existence, there were no computers, and ordering was done by hand, at the start by sending letters to the UK. Later came the fax and what was a big event for the bookshop, microfiche, a way to finally store a list of newly published books in a small space.

Before the mushrooming of kiosks, the bookshop also sold British newspapers and for a time even opened on Sunday mornings for this purpose.

When Amazon and online ordering happened, it was a big problem for bookshops around the world, leading to bankruptcy in many cases.

It was a threat to the Soloneion as well, Christiana Christou, daughter of owner Solon Papachristodoulou said. “It was something new, everybody wanted to try it. Everybody who knew how to.” But the bookshop’s owners also saw the potential.

“The internet was also positive. People could see what is out there,” Christou added. “Soon readers found out that though they would not bring you books to your doorstep there are some things only a bookshop can deliver, such as the possibility to browse a book before deciding if one really wants to buy it, much different from reading a description online.”

The bookshop had to adapt to the changes. For the past 10 years, it has hosted book presentations, and is now branching out into music.

This is a visible change, as are the armchairs and the free coffee which have been added during the past years. The shop’s stationary and gift section has expanded and includes reading lamps and a select collection of puzzles.

But other, less obvious changes are made almost daily, the owners say, to maximise space and to make sure the whole building is used to its potential.

For example, when catering and hotel books stored upstairs became less popular, a decision had to be made – sell them cheaply and move on or hang on to them as the collection was after all one for which a lot of money had been paid.

Andreas Christodoulou, who has been running the Academic and General bookshop in Larnaca for the past 30 years, believes cookery books are one type of books which people will always be attracted to in bookshops.

“Of course you can find cookery recipes on the internet, but it is another thing to get for example a book on Cyprus cookery, where it is described how the dishes developed over time and they have a context.”

What has dropped in this more academically oriented shop, is the sale of computer programming books and other computer books. According to Christodoulou, people who used to buy those “are on the computer anyway”, and rapid developments in these areas makes it impossible for books to keep up. So, what else has technology changed?

He commented on fears which started with the introduction of e-books and related technology, but as the owners of the Soloneion, says not all has been bad.

Initially, he said, this caused a drop in interest, but this lasted only about 1 or 2 years. “People have come back to the original books,” he said. “Actually, in the past three years there has been an increase of 30 per cent in sales.”

He has a number of explanations. “People have a different relationship to physical books. Those who used e-books did not derive the same satisfaction from reading them.”

This is not only about the reader wanting to hold an actual book instead of a screen.

“You can’t display it in your home,” he said. “When people have actual books in their home, they identify with the collection, and it is also a statement for other people who see it and who can understand “who you are”.

In Christodoulou’s experience, students often buy an actual book, though they can download parts of books used for studying. “When you have the whole book, you may find something that is interesting, but you didn’t know you were looking for it.”

To encourage this, the Academic bookshop opened a branch at UCLan in Pyla in 2012.

The Moufflon bookshop is another bookshop which has survived the onslaught of technology in its own way, but with difficulty.

“When the Kindle arrived, I was totally not prepared, thought I should have been,” owner Ruth Keshishian said. “I had to think quickly and downsize the shop.”

She used two ways to keep the bookshop afloat, she went online in a big way, selling books online, while moving to smaller premises.

As there is no tradition of reprinting in Cyprus, Moufflon also deals in out of print and second-hand books in an effort to prevent such books from disappearing.

Unlike other bookshops, Moufflon has only ever worked with books, and has not branched out into selling stationary and other items.

But like all the other bookshop owners who found ways to survive she has the firm belief that there will always be book lovers who will enjoy browsing through the collection instead of relying on technology for reading.

Breaking out of deep injustice