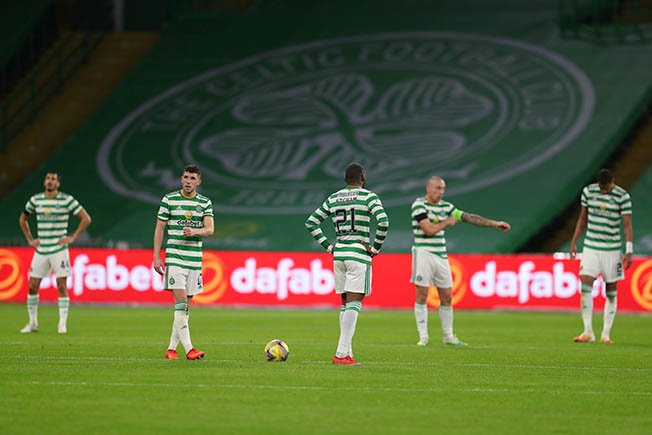 Ferencvaros delivered a Champions League sucker punch to Celtic with a stunning 2-1 win at Parkhead.

David Siger shot the Hungarian side into the lead in the seventh minute of the second qualifier but Ryan Christie, deputising for the injured Odsonne Edouard as the Hoops started without a recognised striker, levelled in the 53rd minute with a deflected shot.

Neil Lennon’s side dominated possession before and after the break but in the 74th minute, against the run of play, Tokmac Nguen restored the visitors’ advantage with a breakaway goal which meant the Scottish champions dropped down to the Europa League qualifiers.

Sergei Rebrov’s side delivered on their promise to be a step up in class from KR Reykjavik who lost 6-0 in the first qualifier at Celtic Park last week.

The Hungarian outfit did not lose in seven away games in Europe last season – five draws and two wins – and thus arrived in Glasgow with confidence.

Christie led the line in the absence of Edouard while defenders Hatem Elhamed and Kristoffer Ajer and winger James Forrest returned to the side, the latter making his 400th appearance for the Hoops.

Strikers Albian Ajeti and Patryk Klimala were judged by Lennon not to be match fit and they watched Forrest have the first effort on target after four minutes, his left-footed drive beaten away by Ferencvaros keeper Denes Dibusz.

The visitors then sustained a brief spell of pressure before a swift break saw them win a corner from which they took the lead.

The Hoops’ defence appeared to clear their lines but Somalia headed to Siger and he had time to take a touch before powering a drive from 22 yards past keeper Vasilis Barkas and into the far corner of the net.

Christie and midfielders Olivier Ntcham and Mohamed Elyounoussi all had efforts which were either blocked or sped wide and just on the half-hour mark Christie failed to connect with a Greg Taylor cross only a few yards out.

Elyounoussi had two more attempts and midfielder Callum McGregor had a shot saved as the home side finished the first half strongly.

Celtic got the goal their pressure deserved eight minutes after the break when Elyounoussi, after working a one-two with Forrest, set up Christie who curled the ball over the grasping Dibusz with the help of a nick off Adnan Kovacevic’s head.

Moments later Ntcham crashed a shot off the turf and against the bar after taking a cut-back from Elhamed before Christie’s shot escaped the far post.

Elyounoussi had the ball in the net after taking a Taylor pass but the flag was up early.

Then, out of the blue, Nguen raced on to a long clearance out of defence and held off the attention of Elhamed before squeezing in from the tightest of angles.

Celtic were desperate in their response. Christie worked some space in the box and cut the ball back but found no takers and the home side eventually ran out of time, including five minutes added on, with their Champions League dreams ended.