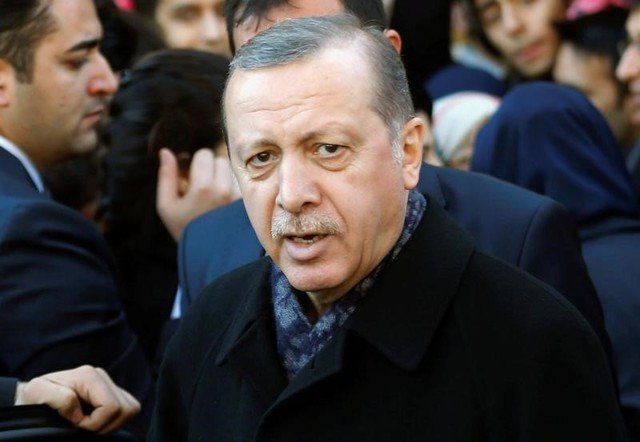 TURKISH President Tayyip Erdogan said on Friday the Greek side was once again avoiding a solution to the Cyprus problem, warning that a solution without Turkey should not be expected.

“We have told Cyprus and Greece clearly that they should not expect a solution without Turkey as guarantor. We are going to be there forever,” Erdogan told reporters in Istanbul after Friday prayers.

Speaking a day after U.N.-hosted talks broke up in Geneva, Erdogan said it was out of the question for Turkish troops to pull out of Cyprus unless both sides pulled out.

Turkish Cypriot leader Mustafa Akinci, striking a decidedly more genial tone prior to leaving Geneva, said future negotiations should “find the ways and means so that both communities of this beautiful island will feel safe and secure.”

“We need time. We can’t have everything on day one,” he told a news conference.

In reference to the maps both sides presented in Geneva, Erdogan said it was out of the question for Karpas to be handed over to the Greek Cypriots. Under the proposals, Turkish Cypriots would retain between 28.2 and 29.2 percent of total Cypriot territory, down from about 37 percent now.

The Turkish president also commented on the return of the ghost town of Varosha.

He said the coastline dispute was over, while the Annan Plan no longer had any validity.

On rotating presidency, Erdogan said there would not be a one term Turkish Cypriot presidency for a four term Greek Cypriot one. It was only fair for there to be a 1 to 2 ratio, he added.

Efforts have been given some momentum by instability in the neighbouring Middle Eastern region and by discovery of large natural gas deposits off the eastern coast.

“Can you consider a situation where the natural gas deposits, instead of triggering enmity, triggering trouble, it becomes an area of cooperation?” Akinci asked.

Getting supply chains in check