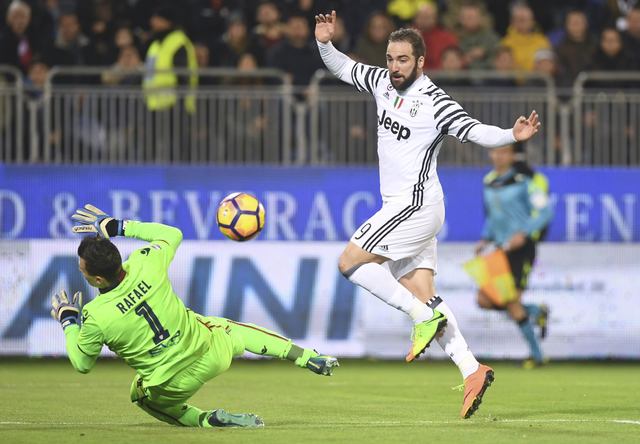 Gonzalo Higuain scored either side of halftime as Serie A leaders Juventus won 2-0 at Cagliari on Sunday to preserve their seven-point lead over second-placed AS Roma, who downed Crotone 2-0 away after goals from Radja Nainggolan and Edin Dzeko.

Higuain, signed for 90 million euros ($95.61 million) last year, proved his worth against Cagliari as he settled a tight contest to take his goal tally to 18 for the season.

Serie A’s joint-top scorer fired Juventus ahead in the 37th minute when he was picked out by a sumptuous Claudio Marchisio pass and slotted past the advancing Rafael. Higuain added a second two minutes after the break by slamming home to round off a searing counter attack.

“The really impressive thing is how hard he works for the team.”

Cagliari, disciplined and organised during the first half, wilted after Juventus took a stranglehold on the match and had Nicolo Barella sent off following a second yellow card in the 67th minute.

“I want a spectacular Juventus,” Allegri added. “When you play football you need to be spectacular.

“Cagliari went down to 10 men and we should have run riot but instead we were too hasty and didn’t make the correct decisions. We need to improve.”

The victory extended Juve’s winning streak to five matches. They have 60 points, seven ahead of Roma, who had earlier made light of a first-half missed penalty.

Nainggolan lashed past Alex Cordaz from a tight angle in the 40th minute after being picked out by Mohamed Salah as the visitors edged a first half in which they had only hinted at their wealth of attacking quality.

Salah then squared for Dzeko, who had sent a hesitant first-half penalty wide, for a simple tap-in in the 77th minute as Roma overtook Napoli, 2-0 victors against Genoa on Friday, into second.

“Our aim today was not to encourage our opponents because when the situation is uncertain and the supporters get involved, Crotone have a team that can play well,” Roma manager Luciano Spalletti told reporters.

“I was a bit concerned by the missed penalty, but then we took the game in hand and controlled things.”

Inter Milan moved up to 45 points in fourth after seeing off Empoli 2-0 with goals from Eder and Antonio Candreva.

Surprise package Atalanta, also on 45, remain firmly in the hunt for European qualification after their 3-1 win at struggling Palermo.

Bottom club Pescara trailed 5-0 after 61 minutes at Torino but scored three times in 10 minutes after the break. They were unable to salvage a draw though and remain hopelessly adrift with only nine points from 24 matches.

Sevilla sneak past Las Palmas to stay in title race