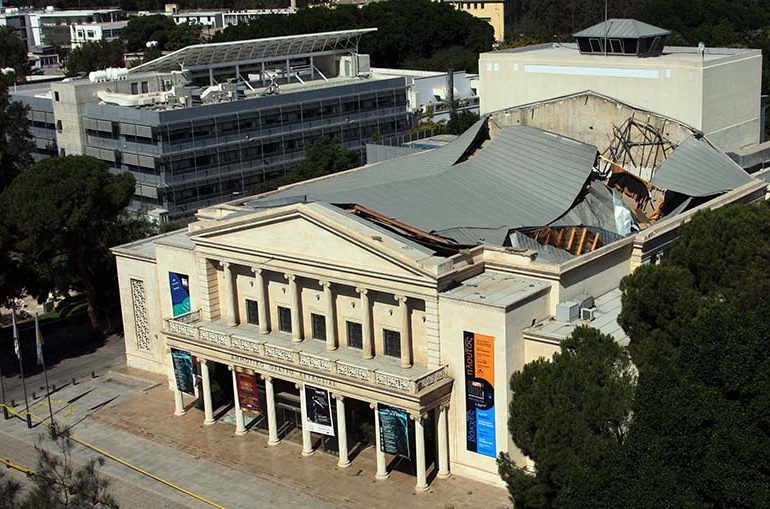 The municipal theatre after the roof collapsed in 2008

Work on rebuilding the Nicosia municipal theatre, which has been sitting derelict since the shocking collapse of its roof nearly nine years ago, began in earnest last month, at an estimated cost of €8.7 million.

Following a 2014 cabinet decision, the contract for the renovation work was awarded to Cyfield contractors, which submitted the lowest bid and pledged to deliver in 24 months. Specifications for the new theatre include improved acoustics, a new stage, state-of-the-art sound and lighting equipment – and a new roof.

But in the many years the theatre has remained dormant, questions have been raised as to the wisdom of pursuing its restoration. In 2013, the state theatre company (Thoc) opened its new 500-seat theatre on the grounds of the old GSP stadium and located very close to the municipal theatre. In the aftermath of the disaster, the Nicosia municipality was given administration of the renovated state-owned Pallas Cine-Theatre in the old city. There is also the Strovolos municipal theatre.

Then there is the cost. The €8.7 million its makeover will cost is only part of a total budgeted €14 million expenditure, all taxpayers’ money that could have been used elsewhere.

The House of Representatives’ president, Demetris Syllouris, meanwhile, suggested that the municipal theatre, situated just a stone’s throw from the parliament building, would be a better use of public funds if it became part of an expanded parliament. The House desperately needs more space and prohibitive costs have put on hold plans to build totally new premises elsewhere in the capital.

And amid all that is the fact that nearly nine years after the roof collapsed the court case into who was responsible has yet to start.

The roof collapsed on the night of June 11, 2008, the night before the theatre would have been packed with school children attending an end-of-year ceremony and only three years after a previous renovation.

The collapse sparked public outcry and prompted the government to appoint a panel to investigate the reasons, with the municipality announcing plans to go after whoever was found responsible.

The three-man panel found that the main problem had been the structure’s roof trusses, originally put in place in the 1950s, during construction of the theatre.

Although the roof had been part of an extensive refurbishment in 2005, the project’s architects and civil engineers said that the relevant studies had shown that the trusses had shown no signs of deterioration, could withstand well over the prescribed load, and were thus in no need of replacement.

Then-mayor Eleni Mavrou said in 2009 that, although the municipality would go after those deemed responsible, restoration of the theatre was not incumbent on the outcome of any litigation, but on the state of the municipality’s finances.

According to the 2014 cabinet decision, almost half – €6 million – of the total cost of refurbishment will come out of the education ministry’s budget, plus an additional €2 million per year for 12 years for maintenance. In return, the ministry will be allowed use of the theatre for 120 days a year, for a period of “no less than 20 years”.

Both past and present municipal officials are adamant the theatre is vital for the cultural life of Nicosia.

“Of course Nicosia needs to have its own area for cultural events,” former mayor Mavrou told the Sunday Mail.

“Despite the name, it’s not just a theatre – it has held concerts, speeches, and other events.”

The option of using alternatives sites in lieu of a municipal theatre, Mavrou said, was a no-go.

“I mean, Thoc has its own productions year-round,” she said.

“And Pallas was renovated for use by the state symphonic orchestra, with whom the municipality has been sharing its use. Both theatres might be available at times, but not necessarily when they are needed.”

A municipality source said there are several reasons why the decision to refurbish was the right one.

“First, Nicosia has some theatres, but it has no big theatres,” the source said.

Another reason is that the 2014 cabinet decision saw the renovated theatre as fulfilling the function of the National Cultural Foundation, the plans for which were finally laid to rest in the aftermath of the 2013 economic crisis.

“And third is the symbolism of the matter. We can have a municipal centre hosting events right next to the green line, pointing out all those things we would like to be rid of,” the municipal source added.

Plans to turn the abandoned theatre into an extended wing of parliament date back to 2011 when a proposal spearheaded by Disy’s chief municipal councillor Nicos Nouris made it to the floor of the House, where it was killed by Nouris’ own party, as well as now-defunct Evroko.

By the beginning of this year, the municipality had already agreed with Cyfield for the refurbishment work when House speaker Demetris Syllouris announced on February 3 that he was rekindling the possibility of extending parliament into the municipal theatre.

Syllouris – ironically the former Evroko leader who had helped nix the idea back in 2011 – had first raised the possibility last September when he suggested that the state exchange the theatre for the plot where the National Cultural Foundation was to have been built near the interior ministry.

Then, in January, Syllouris said he agreed with the town-planning department boss to “start a dialogue” regarding this option.

Nicosia mayor Constantinos Yiorkadjis was having none of it. The refurbishment plans were so well advanced that he went ahead and awarded the theatre renovation contract.

A municipality source said there was simply no way for such a long process, for which “money had been spent and people worked on for years” to be halted.

“It would be a shame for Nicosia to change course,” the source said.

The court case in the 2008 collapse, meanwhile, has progressed at glacial slowness.

It took until 2010 for civil lawsuits to be filed against the architects, the Pefkios Georgiades firm, the civil engineers, Santama Brothers, and the contractors, A Panayides Contracting, responsible for the 2005 renovation.

The municipality is asking for €3 million in damages, but seven years since the lawsuit was filed, the first court hearing has yet to take place. The municipality insists that the delay is simply due to the judiciary’s huge backlogs courts and pre-trial objections.

“It was a fake, slanderous report,” said Costas Santamas of the findings of the three-man panel set up by the government to investigate the collapse.

“First of all, there has been evidence suggesting human interference may have had something to do with the collapse. It seems someone had been inside the theatre at the time of the collapse and broke the glass door on his way out, but no one cared enough to investigate this. Also, bullets and shells were found in the rubble after the collapse – again, no one looked into this,” he told the Sunday Mail.

Mavrou denied any hard evidence of foul play was ever discovered, though she acknowledged such rumours had made the rounds at the time.

“Yes, certain rumours to that effect had been going around but there has been no evidence to back them,” she said. “Absolutely none.”

Returning to the report of the investigation committee, Santamas questioned the methodology as well as their fitness for the job of the three committee members who made up the panel, university professors Georgios Ioannides and Panicos Papadopoulos and civil engineer Costas Meletiou.

“When we go to court, everything will come to light,” Santamas said.

“Until then, we have to live with the bitterness that we have been wronged.”

It seems that the wait might finally be over.

“The court is scheduled to issue pre-trial instructions on this case on March 30,” a source following the case told the Sunday Mail.

News articles on Trump could be more balanced