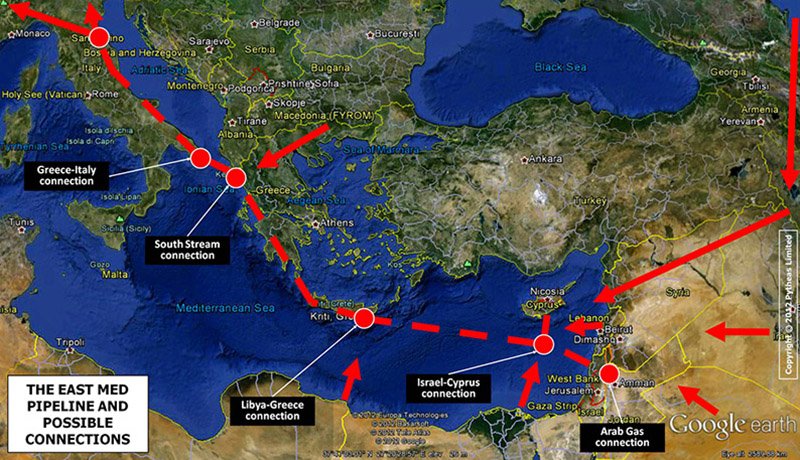 Energy security is a key concern for the European Union (EU), an energy importer reliant on producing and transit countries for supply.

The majority of the EU’s oil and gas imports originate in neighbouring regions. For gas, the EU relies mainly on Russia, which supplies 38 per cent of its imports. Natural gas may have the brightest energy future among the fossil fuels, given its potential to serve as a transition fuel to a sustainable and environmentally-friendly energy future. However, with the bulk of its gas supply imported from Russia, the EU might look for alternatives to diversify its supply sources as well as its political and economic risks.

The recent discoveries in the eastern Mediterranean give the EU the alternative that it is looking for. Huge discoveries have been made offshore Egypt, Israel and Cyprus, and others in Greece and Lebanon may be on the way. Collectively, they may justify a pipeline from the East Med to Italy and onto the rest of Europe.

The EU’s European Neighbourhood Policy (ENP) covers 16 eastern and southern neighbouring countries, and aims to achieve “the closest possible political association and the greatest possible degree of economic integration”. Bilateral policies have been accompanied by multilateral initiatives like the Eastern Partnership and the Union for the Mediterranean. This architecture intends to establish a “ring of friends” and attract countries seeking close relations with the EU.

The recent high-profile meeting in Thessaloniki between the leaders of Greece, Cyprus and Israel reiterated the support for the East Med gas pipeline project. The project, financially and politically supported by the European Commission, proposes to transport 8-16 billion cubic metres annually of natural gas through a pipeline – more than 2,000 kilometres long and with depths in some locations exceeding 2,000 metres – across the eastern Mediterranean. With a cost exceeding €6 billion, the pipeline would transport in the first stage Israeli and Cypriot gas to Greece, and offers the European Union a good alternative to Russian gas.

The technical study, conducted on behalf of the Natural Gas Supply Corporation of Greece (DEPA) and financed by the EU, confirmed that the project is “technically feasible”. Technical feasibility is not the only matter of concern, however. Another challenge is the final cost of gas at destination, which has been projected to range anywhere from $6 per MMBtu to $8 per MMBtu, far higher than the present average Russian gas price ($4.50) that the EU counties are paying.

The financial viability of such a project is a main concern, as it could prevent private companies from supporting it alongside the EU. The high construction cost of the pipeline, which will be reflected in the price of the delivered gas, could be a deal breaker for the project. The only chance to make it feasible would be the acceptance of the importing countries to pay a security premium on their current gas prices. But this would be tricky for Europe as it is committed to upholding free trade principles, which includes fostering competition through open markets. It is therefore doubtful Europe could accept paying a premium for its gas.

Germany and other North European countries are pushing to import more cheap gas from Russia – now that North Sea reserves are dwindling – through the Nord Stream II Pipeline which will complement Nord Stream I in the transportation of Russian gas to Europe under the Baltic Sea. The divisions among EU countries concerning Russian gas complicates matters. Whereas eastern countries such as Poland oppose heavy reliance on Russian gas and favour diversification of sources, Germany, which is the biggest importer of gas in Europe, favours the import of gas from Russia and is ultimately able to channel decisions in its interests.

On the other hand, the previous US administration encouraged the realisation of the East Med pipeline project, with former Secretary of State John Kerry and his aides trying to ease the rift between Cyprus and Turkey as well as between Israel and Lebanon.

But with President Trump in charge, the US has changed direction. It is encouraging more internal oil and gas production, as well as shale production. Consequently, it will soon start looking for export markets and Europe will be high on the list. The US has already shipped its first LNG cargo to Poland.

At a time when many European countries are introducing and subsidising renewable energy and when market factors are all in favour of a renewable energy revolution, this will only make things more difficult for the materialisation of the pipeline. The global average cost of solar PV fell by 61 per cent between 2009 and 2015, while onshore wind costs have declined by an average of 15 per cent over the same period. The BP Energy Outlook predicts total installed renewable capacity will triple by 2035, accounting for a third of all power generation growth.

At the end of the day, it is companies, not governments, who are going to build and finance this pipeline. Therefore, it has to be lucrative for it to materialise.  Reaching a consensus among EU countries on a non-viable project will be very difficult and probably impossible. In this case other export alternatives for the East Med reserves shall be sought and won’t be difficult to find.

Abboud Zahr is an oil and gas specialist based in Cyprus

History speaks to those who listen