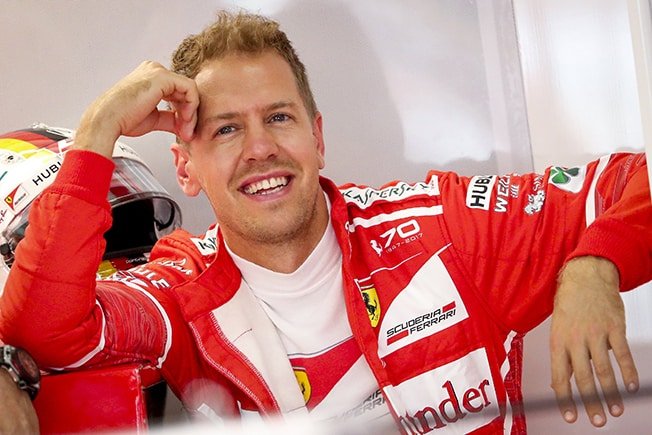 Ferrari's Sebastian Vettel was all smiles after topping the timesheets

Sebastian Vettel went fastest ahead of team-mate Kimi Raikkonen as Ferrari set the pace on the opening day of Malaysian Formula One Grand Prix practice on Friday.

Vettel’s time of one minute 31.261, the fastest ever around the 5.5-kilometre Sepang track, was set in the second 90-minute session in the afternoon, which was brought to an early halt after a loose drain cover caused a heavy crash for Romain Grosjean.

Vettel had been fifth quickest in the rain-hit opening session.

The Ferrari driver’s championship-leading title rival Lewis Hamilton was only sixth fastest in the afternoon, as he had been in the first session, ahead of team mate Valtteri Bottas with both Mercedes drivers reporting a general lack of grip.

Ferrari’s Friday display and Mercedes’ struggles will be welcomed by Vettel who trails Hamilton by 28 points in the overall standings with six races left.

A record four-times winner in Malaysia, Vettel desperately needs a fifth victory after his title hopes were dealt a severe blow at the last race in Singapore, where the German crashed out on the opening lap to clear the way for Hamilton to win.

Daniel Ricciardo, who led a one-two with team-mate Max Verstappen in last year’s Malaysian race, ended the day third fastest ahead of the Dutchman.

Verstappen, who turns 20 on Saturday, had ended Friday’s opening session fastest ahead of the Australian.

Fernando Alonso, who vaulted up the order on a rapidly drying track to end the first session third, was an impressive fifth for McLaren.

Sergio Perez in the Force India was eighth ahead of Renault’s Nico Hulkenberg and team mate Esteban Ocon who rounded out the top 10.

Frenchman Pierre Gasly, making his Formula One debut this weekend after being drafted in as a replacement for under-performing Russian Daniil Kvyat at Toro Rosso, was 15th fastest.

The 21-year-old, being evaluated as a permanent replacement for Renault-bound Carlos Sainz for next season, outpaced the Spaniard who was 16th.

Neither of Friday’s two sessions ran to their full 90-minute length.

The morning session was delayed by half an hour due to a tropical downpour that lashed the track minutes before its scheduled start.

Grosjean’s crash in the afternoon brought out the red flags with 22 minutes of the session left.

The Frenchman hit the loose drain cover with his right rear tyre, which exploded upon impact and pitched his Haas into the barriers.

The session was not restarted, with Formula One race director Charlie Whiting driving out in the safety car to inspect the damaged drain.