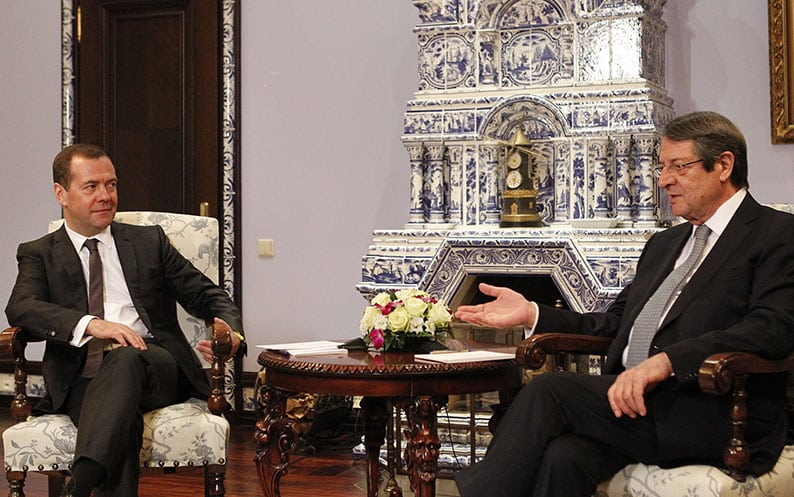 Cyprus is an important and reliable partner of Russia, prime minister of the Russian Federation Dmitri Medvedev said on Monday during a meeting with President Nicos Anastasiades in Moscow.

Speaking through an interpreter, Medvedev said important bilateral documents will be signed during Anastasiades’ visit which was also a good opportunity for them to exchange views.

He added that Anastasiades will hold ‘very important discussions’ with Russian President Vladimir Putin on Tuesday.

Medvedev highlighted the beneficial cooperation between the two governments and their business people and expressed his satisfaction that a cultural dialogue was also developing.

Noting that this was Anastasiades’ third visit to Russia as president of Cyprus, he said it showed that Cyprus “is an important and reliable partner to Russia”.

Anastasides said the fact that he was visiting Russia for the third time “symbolises a lot”, such as the historic ties between the two countries and Cypriots’ appreciation and gratitude towards Russia for its long-lasting support in the Cyprus problem.

He also referred to the economic support that Russia offers to Cyprus in the fields of business and tourism.

After their meeting, Medvedev and Anastasiades attended a working dinner during which they discussed various issues, such as bilateral relations, economy, EU-Russia relations and the Cyprus issue.

The president is accompanied by ministers of foreign affairs, finance, and transport, as well as the government spokesman.

On Tuesday Anastasiades and Putin will sign a joint action plan for the period 2018 – 2020 that will cover all areas of cooperation between the two countries, including politics, the economy, commerce, energy, defence, international issues and EU affairs.

Ministers will sign agreements on maritime transport, on international road transport, on communications and information technology, and co-operation during humanitarian operations in crisis management situations.

A memorandum of understanding will also be signed between the ministry of justice and the prosecutor-general’s office of the Russian federation.

Nicosia also aims to expand an agreement on the avoidance of double taxation in other fields.

The Cypriot government wants to increase the number of Russian tourists visiting Cyprus from approximately 900,000 per year to one million.

The two sides will also talk about maritime issues, concerning Russian companies and the use of Limassol port by them, as well as the facilities which can be offered to Russian warships.

Interior minister backs use of physical barriers along green line