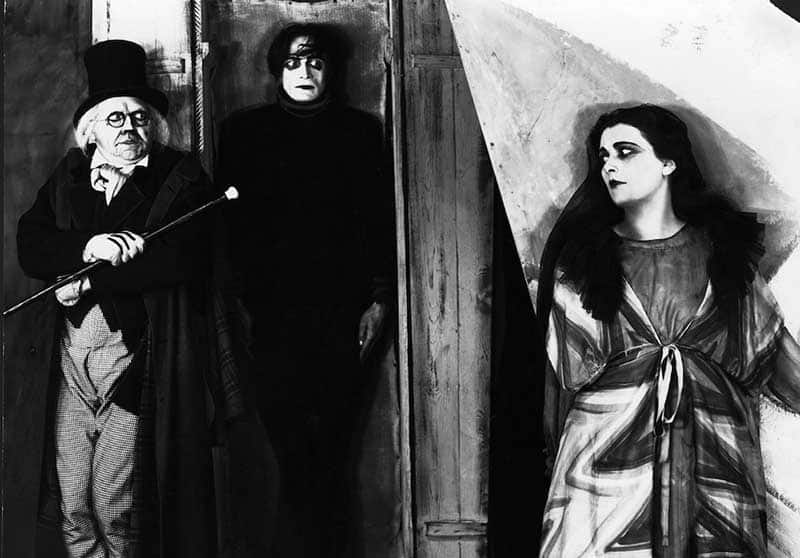 “Imagine yourself walking down a long and winding corridor. As you pass through each doorway, you are plunged from complete black to stark white. A bright light shines directly on to your face, causing your shadow to twist and bend and attain a life of its own. Welcome to the world of German Expressionist cinema…”

This delightfully lyrical introduction to the upcoming exhibition The Shadows – German Expressionism in Cinema and its Legacy may be a bit OTT for those of us who prefer Disney to Dr Caligari, but Preston Wilder, the Mail’s film critic, assures me it’s pretty accurate. Apparently German Expressionism is a big thing in the world of cinema, though the post-WWI movement also encompasses all sorts of artistic genres. It made its first appearance in literature and painting, then had an influence on theatre and architecture, and finally embraced cinema, where it reached its heyday at a time when Germany was not, shall we say, at the top of its game. Perhaps the first and one of the most important movements in the history of cinema, the stylised films of this time are considered cinematographic works of art and constitute the basis upon which the most popular and most commercial cinema genres emerged (including film noir, horror, and sci-fi) and have, for the last century, been impacting the evolution of audiovisual art, visibly leaving their mark on the works of the most important creators of modern times.

So, now you know what German Expressionism is, you’re all set for an event which aims to “relate the past to the present, putting emphasis on the significant influence of the movement to the future development of cinema, television, comics and contemporary pop culture from Orson Wells and Alfred Hitchcock to Tim Burton and Guillermo Del Toro.” Taking place between November 7 and 19 at the Kastelliotissa Hall in Nicosia, and organised by the Evagoras and Kathleen Lanitis Foundation in collaboration with Goethe Institut Cyprus, Shadows is an interactive exhibition of epic proportions. Curated by the artistic directors of the International Short Film Festival of Cyprus Alexia Roider and Ioakim Mylonas, the event sees exhibits, photographic material, documentaries, short and feature films, lectures and workshops alongside “posters, exhibits, photographs, drawings, notes from the Deutsche Kinematek museum in Berlin” plus acclaimed speakers and film academics will also be giving lectures on the movement, its genesis, its characteristics, and how it has influenced world cinema through the years.

But the highlight of the event, organisers suggest, is the transformation of the venue itself. For the duration of the exhibition, the medieval hall of Kastelliotissa is set to become a huge cinematic film set inspired by a genre which has left, organisers reveal, “a unique mark on history, foreshadowing nearly all the successive genres of cinema.” Most of us, for instance, will be familiar with Robert Wiene’s 1920 classic The Cabinet of Dr Caligari, a film which, according to the Preston Wilder, “pretty much invented the whole genre of German Expressionism! Canted angles, artificial sets, and moody lighting; it’s fairly primitive and more of an experiment than a story, but it is,” he adds, “probably the most definitive German expressionist film in terms of its visuals.”

Showing on the big screen on November 7, Dr Caligari is one of the more unmissable films of the festival, apparently. But the remaining showings are just as baroque, ornate, and moody… November 8 sees a screening of Paul Wegener’s Golem (also released in 1920), while the following day brings us Reiniger’s The Adventures of Prince Achmed. Murnau’s Nosferatu (an unauthorised 1922 adaptation of Bram Stoker’s Dracula, starring Max Schreck as the vampire Count Orlok) comes to the silver screen on Saturday; Faust (from the same director) screens on Sunday; and Wiene’s Τhe Hands of Orlac (a horror film, combining expressionist motifs with more naturalistic visuals) will be showcased the following Thursday.

Which just leaves us with Metropolis, a film which premiered at the end of the twenties and is a bit of an eye-opener: “Later than the others and thus more sophisticated visually, it’s an extravaganza, massive, a real epic,” Preston reveals. “A well-known film, this is more science fiction than anything else, and very watchable even for those who know nothing of the genre.” Combined with live electronic music, Metropolis brings events to a close: a twelve-day delve into the moody past for those who enjoy wandering the winding corridor of German Expressionism!

The Shadows, German Expressionism in Cinema and its Legacy
From November 7 to 19 at Kastelliotissa Hall in Nicosia. Entrance to all events is free of charge. For more information, visit the Facebook page ‘Evagoras and Kathleen Lanitis Foundation’ or call 99 486616