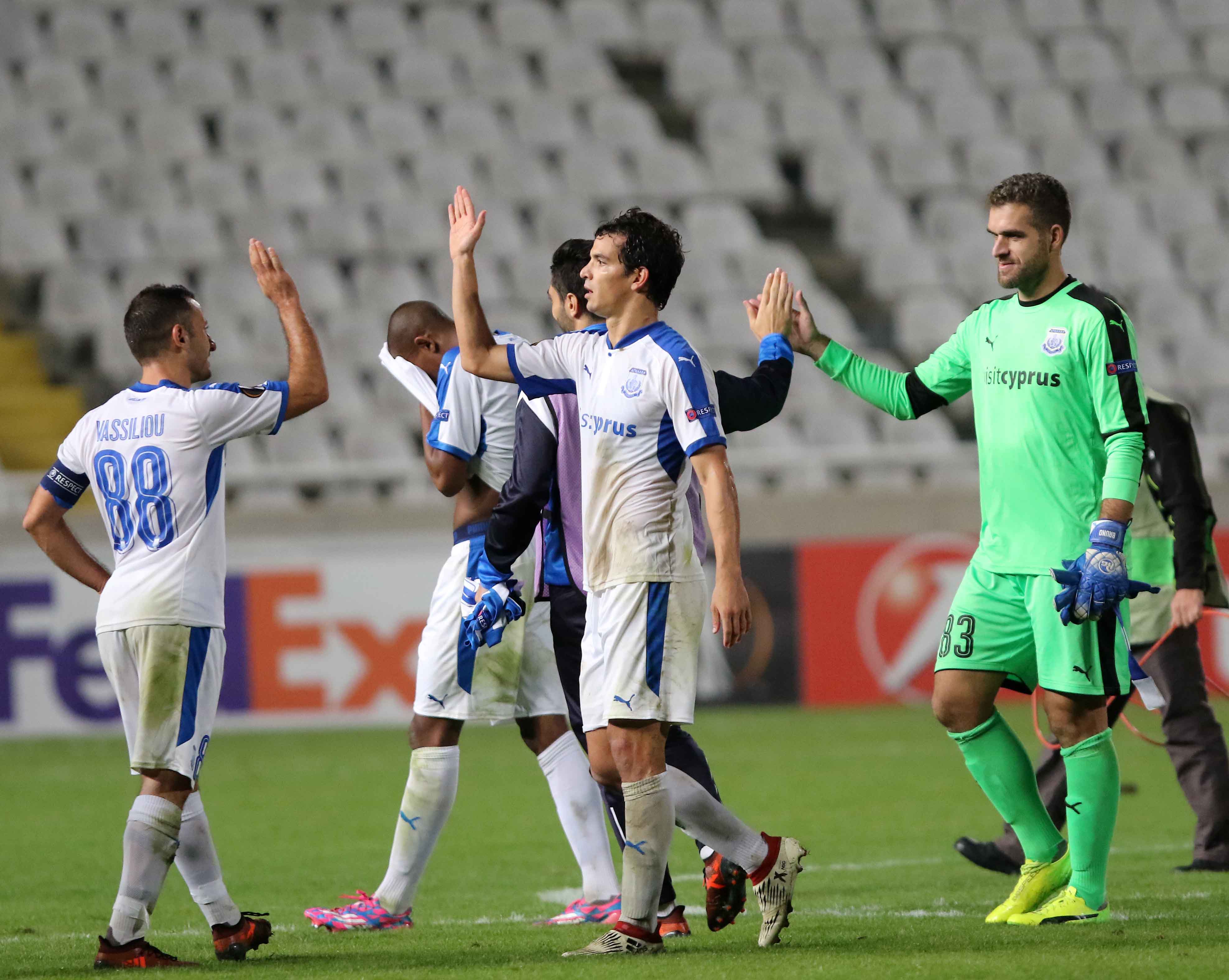 Limassol side Apollon have drawn three of their four group games so far, with late goals becoming a speciality

Anything other than a win for Apollon away at Lyon tonight (10.05pm) will see them eliminated from the Europa League.

The Cypriots have had a respectable European campaign so far, surpassing most pundits’ expectations having amassed three draws out of their opening four games in a very tough group.

Depictive of the team’s attitude, all of those three draws were obtained beyond the 89th minute, at home to Lyon, away at Everton and, most recently, in the 94th minute at the GSP against Atalanta.

Lack of a victory, however, means that they are in third place with three points, five adrift of Atalanta and Lyon.

Only a win will do for Sofronis Avgousti’s men tonight, which is easier said than done against one of the tournament favourites, especially away from home.

Lyon are tied with Atalanta at the top of Group E with eight points each, and the French club will be going all out for the win as they set their sights on first place.

Apollon press officer Fanourios Constantinou feels that his side face one of the Europa League’s best teams but can still cause them trouble if they play to their strengths.

“It is possibly our toughest challenge against one of the favourites for the tournament. The final will be held at their ground and last year they reached the semi-finals,” he noted.

“We have shown that we can stand up to the challenge against such sides and it will be another huge test for us to stand up to Lyon in France.

“We have nothing to lose,” Constantinou stated, before adding that “we have been excellent so far and we are aiming to put in another good performance”.

Unable to make the journey is Greek forward Fotis Papoulis, who is suffering from gastroenteritis. Yet the manager can again call on defender Valentin Roberge who missed the last two European games through suspension after a red card at Goodison Park.

Lyon have won five of their last six home games in the Europa League, drawing the other. In fact, they have never lost at home in the group stages of the competition, winning six and drawing two. Their last home outing was a 3-0 win against Everton on Matchday Four.

Crucial to their success is the potency of their attacking trio. Memphis Depay, Mariano Diaz and Nabil Fekir currently form one of the most fearsome forward lines on the continent.

In Ligue 1 this season so far, the trio have scored 26 goals together, two more than the front three of big-spending Paris Saint-Germain, made up of Edinson Cavani, Kylian Mbappe and Neymar.

Apollon have found life tough on the road in Europe. Despite making the group stages on three occasions, the team has managed just one win from their previous eight away group matches.

What they certainly do not lack is competitiveness. The 94th minute leveler scored by Emilio Zelaya against Atalanta last time out means that Apollon have netted at least once in their last 12 European matches, and four of the last five have been draws.

The meeting between the two teams in Nicosia in September ended with Adrian Sardinero scoring an injury time equaliser for the Limassol club and, if they are to get anything from tonight’s clash, Apollon will have to show similar mettle.