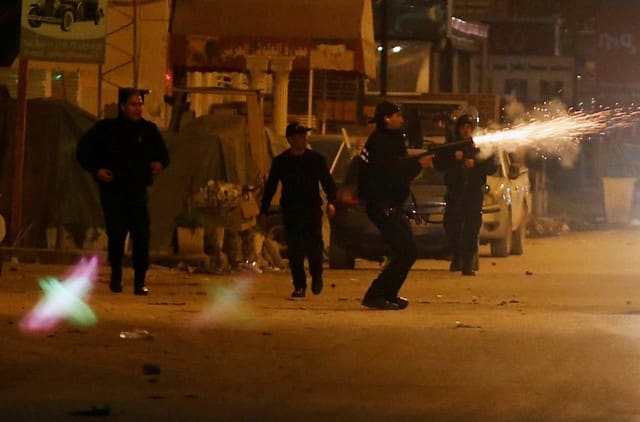 Police officers fire tear gas to break up a protest during demonstrations against rising prices and tax increases, in Tunis

Tunisian protesters burned down a regional national security headquarters near the Algerian border, prompting authorities to send in troops after police retreated, witnesses said, as unrest over prices and taxes raged on nationwide.

But the government, under pressure to cut a ballooning deficit and satisfy international lenders, will not revise austerity measures in the 2018 budget despite the spate of protests, Tunisia’s investment minister said on Thursday.

Army troops have been deployed in several cities to help quell the unrest, seven years after the overthrow of autocrat Zine El-Abidine Ben Ali in the first of the Arab Spring revolts.

In Thala, near the Algerian border, soldiers were sent in late on Wednesday after crowds torched the region’s national security building, forcing police to retreat from the town, witnesses told Reuters.

Tunisia’s unity government – which includes Islamists, secular parties and independents – has portrayed the unrest as driven by criminal elements.

“The government will not revise the budget or even some of its articles because some troublemakers have come out in the street,” Investment Minister Zied Ladhari told Mosaique FM radio.

Tunisia’s 2025 dollar bond fell more than one cent to a seven-week low of 98.75 cents, Reuters data showed on Wednesday . The Football Association said it was postponing all weekend matches because of the disturbances.

Prime Minister Youssef Chahed has accused the opposition of inciting unrest. Rejecting the charge, the main opposition bloc, the Popular Front, called for a major protest in Tunis on Sunday to coincide with the seventh anniversary of Ben Ali’s fall.

Anti-government protests have flared in a number of cities and towns since Monday against price and tax increases.

While Tunisia is regarded as the only democratic success story among countries swept up in the Arab Spring, it has had nine governments since Ben Ali’s overthrow, none of which have been able to resolve deep-rooted economic problems.

The army has been deployed in Kebeli, Bizerte and the seaside resort city of Sousse among other towns to protect government buildings that have been targeted by protesters. Around 600 people have been arrested, including more than 300 overnight between Wednesday and Thursday.

“What is happening is crime, not protests. They steal, intimidate people and threaten private and public property.”

Many of the protests have been peaceful, however, with demonstrators expressing their anger and frustration over deepening economic hardship since the 2011 uprising.

“It is true that some protesters burned and stole during last night’s protests, but the rulers steal and destroy Tunisia in the morning and at night with their frustrating decisions,” said a teacher who was shopping in the capital and only gave his first name, Mohamed.

“We expected things to improve after Ben Ali was ousted, but it seems that after seven years of the revolution, we’ll give our salaries each month to Prime Minister Chahed for him to spend them,” he said.

Price rises for fuel and some goods and services from Jan. 1 have increased public anger. The 2018 budget also raises customs taxes on some imports, and the government is trying to cut the public sector wage bill through voluntary redundancies.

The 2011 revolt and deadly Islamist militant attacks in Tunis and Sousse in 2015 damaged foreign investment and tourism, which accounts for eight percent of Tunisia’s economic activity.

Unemployment nationally exceeds 15 per cent, and is much higher in some marginalised regions of the interior.

The scars of war run deep