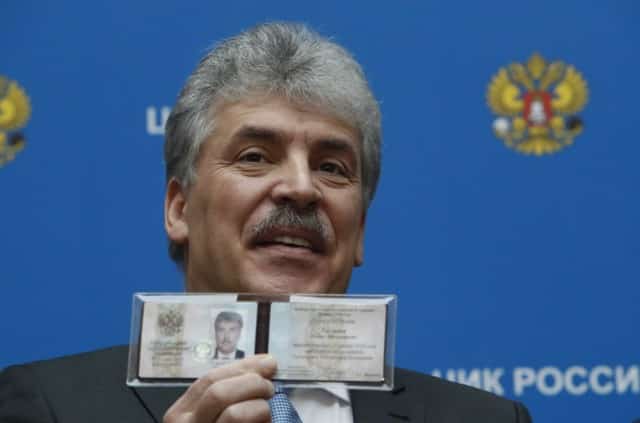 Businessman Pavel Grudinin, representing the Russian Communist Party, demonstrates his identity document after he was registered as a presidential candidate in Moscow

The Russian Communist Party moved to overhaul its geriatric image on Friday, registering a wealthy 57-year-old farm boss to challenge incumbent Vladimir Putin for the presidency in a gamble it hopes will revive its electoral fortunes.

Russia’s central election commission on Friday said it had registered Pavel Grudinin, who runs a farm business on the edge of Moscow, as the party’s candidate for the March 18 election after the communists unexpectedly decided against putting up their veteran 73-year-old leader Gennady Zyuganov.

Backed by state TV, the ruling United Russia party, and many voters who live outside big cities, polls show 65-year-old Putin, who has dominated Russian politics for the last 18 years, is on track to comfortably win a fourth presidential term.

Grudinin, a fresh face in an otherwise stale political line-up that has hardly changed in the last two decades, could indirectly help Putin by boosting turnout amid signs of apathy among some voters who assume Putin will win however they vote.

Though a shadow of itself in the Soviet era when it enjoyed a monopoly on power, the Communist Party is also hoping a younger less orthodox contender may be able to revive its fortunes and appeal to younger voters.

The party has seen its share of the vote in post-Soviet presidential elections more than halve from a high of almost 41 per cent or around 30 million votes in 1996. In the last election, in 2012, it won just over 12 million votes.

Yet it remains popular with millions of Russians, particularly older people who live in rural communities, retains a nationwide network, and regularly comes second to the ruling party in elections.

Grudinin is not a typical communist candidate.

Zyuganov, who the party has fielded unsuccessfully in four presidential elections, is known for hard line communist views, his frequent quoting of Soviet revolutionary Vladimir Lenin, and once called for the re-Stalinisation of society.

Grudinin, a former Putin supporter, makes jokes, is open about the fact that he earns 20 million roubles ($353,773.17) a year, says modern communists should learn from the USSR’s mistakes, and advocates Russia borrowing some aspects of Chinese-style communism.

Observers have noticed another big difference.

While Zyuganov in recent years would criticise the ruling United Russia party, he was careful, in the tightly-controlled political system, not to harshly criticise Putin.

Grudinin has been less coy, accusing Putin of making empty promises and suggesting he has been in power too long, even comparing him to veteran Soviet leader Leonid Brezhnev whose lengthy rule became synonymous with decay.

“When General Secretary Brezhnev sat in his post (for too long) it was bad,” Grudinin told a state TV talk show last month. “Why are we repeating the same mistake?”

Learn from one of the best body language gurus

Police to step up probe into Dreambox illegal streaming service