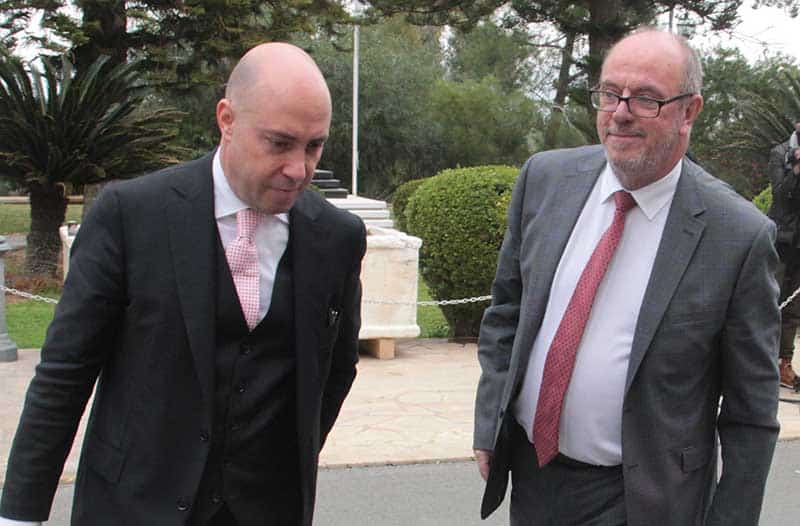 How unfortunate that Sir David Nicholson, chairman of the newly-established State Health Services Organisation (Okyy), witnessed a nasty public row between the health minister and representatives of the doctors as he arrived to start work this week. This was, however, a perfect introduction to what is waiting for the former NHS chief executive as he embarks on the onerous task of turning state hospitals into autonomous entities, the main pre-requisite for the operation of the national health scheme (Gesy).

On Thursday, the day Okyy had its first meeting, representatives of private and state hospital doctors held a news conference during which they fired a broadside against health minister Giorgos Pamboridis, for “unethical” comments he had made about them, and demanded a public apology. Head of the Cyprus Medical Association Petros Agathangelou, who Pamboridis labelled “Judas” last June for allegedly attempting to undermine the Gesy plans, accused the minister of making “false and unsubstantiated comments” that tarnished the reputation of doctors.

Pamboridis, unlike most politicians, seems to relish public confrontation and had not helped matters with Tuesday’s incendiary tweet about doctors being worse “filth” than lawyers. He also attacked three hospital doctors for refusing to work, temporarily, at the intensive care unit of Nicosia General to cover shortages in medical staff. He refused to apologise, restricting himself to saying that he had great respect for doctors that honoured their Hippocratic oath, implying he had none for those that did not.

While all this was going on, Okyy was discussing the need of securing the involvement of all the medical staff in the Gesy project. “If you want to make the kind of changes to improve services that we know are required in this country, you have to engage the workforce, you have to work with doctors and nurses and all the health professionals together to improve services for patients,” said Sir David. Nobody could disagree with him, but this is easier said than done bearing in mind the union mentality that dominates the public sector, not to mention the refusal of private doctors to accept the remote possibility of slightly smaller earnings for the common good.

How would Sir David and his colleagues engage a workforce the only concern of which is maintaining their work privileges that they fear would be threatened by hospital autonomy and the eventual introduction of Gesy? This workforce has been creating problems for the health ministry and placing obstacles at every stage of the Gesy planning while their only contribution was to up labour costs, both nurses and doctors forcing pay rises out of the government after threatening strikes and the derailing of the health scheme plans.

The government recognised the workforce had to be on side if Gesy is to work and offer a good standard of healthcare but all efforts at building some kind of consensus have failed. This is because in Cyprus consensus is achieved only when union demands are satisfied and it is the reason why the government doctors’ union Pasyki has been complaining the health ministry has not been consulting it and asking its views regarding the implementation of Gesy. For any outsider, this would seem a fair point, but the reality is that the only concern of the hospital unions is how to preserve the privileges of its members once hospitals become autonomous. The only way to achieve consensus is by keep giving the health professional more money, which would ensure the unviability of Gesy.

Just as teaching unions have ensured public education primarily serves their members’ rather than the children’s interests, doctor and nursing unions want hospitals operating along the same lines. How can this deeply-rooted union mind-set be changed? Pamboridis has tried but has hit a brick wall which goes some way to explaining his inappropriate public comments. These stem from his frustration at being constantly undermined by the unions and private doctors. Sir David will become acquainted with these attitudes once the management team that is recruited tries to bring changes in the way hospitals operate. We leave aside the opposition from private doctors, wanting to protect their earnings, whom the government would also have to deal with.

In the end, confrontation with these interest groups cannot be avoided if Gesy is to be introduced and the authorities need to be prepared for it. When the Labour government in UK tried to introduce the NHS, after WWII, it also encountered stern opposition from doctors; the British Medical Association organised a fierce campaign against the health minister at the time, but eventually came on board.
The new government that will emerge after the election needs to put aside the chimera of consensus and brace itself for a confrontation with the doctors, regardless of the disruption this might temporarily cause at hospitals. It would still have the full backing of the people who want a universal healthcare system.

Coffeeshop: Our principled-Paphite Lillikas will never give up his opportunism