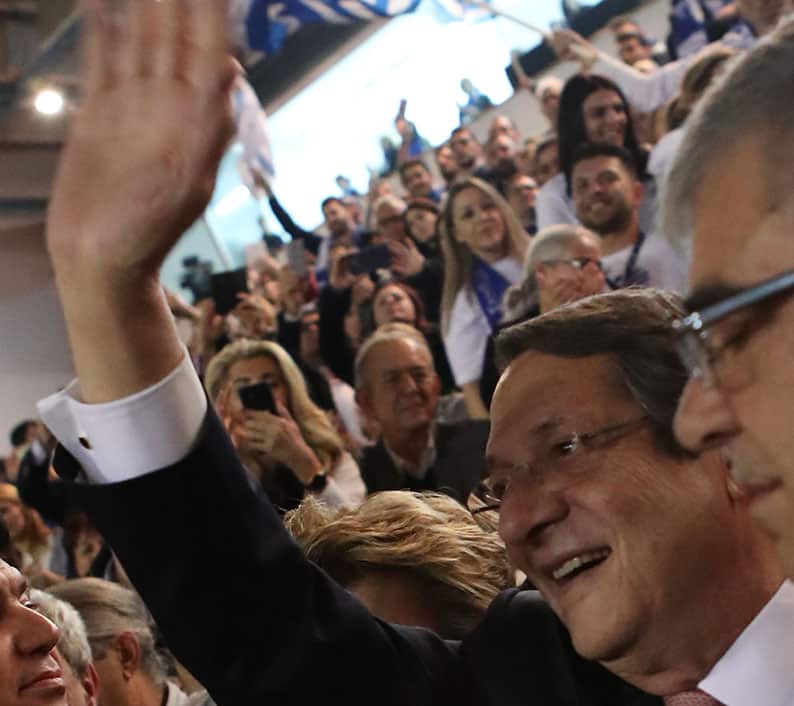 Nicos Anastasiades comfortably held on to the presidency on Sunday, winning a second five-year term with a 12 per cent lead over Akel-backed Stavros Malas and garnering 55.99 per cent of the vote to his rival’s 44.01 per cent.

In a brief victory speech to hundreds of supporters and officials at the Tassos Papadopoulos stadium in Nicosia, which was crawling with security, Anastasiades, 71, said his government still had a lot to offer and “there’s still a lot more we need to do”.

“This is why I insist we should cooperate,” he said. “It is only through cooperation we will achieve everything we owe to the people of Cyprus.” He spoke of continuing “with the same determination… to combat corruption”, to help vulnerable groups, and to find a Cyprus solution “which does not disregard the concerns of Greek Cypriots but also bears in mind sensitivities of Turkish Cypriots”.

The results of the runoff election in his favour will be seen as the electorate’s approval of Anastasiades’ handling of the Cyprus problem even after last year’s failed talks, along with approval of his economic policies over the past five years for which his government has received plaudits, political opposition aside.

Alternatively, the numbers could indicate that Anastasiades may have gained more of the centrist hardline voters that were up for grabs on Sunday, while Malas could have benefitted from the more pro-rapprochement members of the electorate who have been disillusioned with the president’s handling of the Cyprus issue over the past 12 months, especially the collapse of the talks in Switzerland last July.

“There are two narratives in the Greek Cypriot community: one that he bears responsibility for the failure of talks and the other – that Turkish intransigence is responsible. It’s apparently the second which prevailed,” political analyst Hubert Faustmann told Reuters.

On Sunday almost five per cent of the electorate cast protest votes by means of invalid or blank ballots, signalling their disaffection with both candidates. This was in addition to over a quarter of the electorate who did not vote at all.

Indications came early that Anastasiades would win when exit polls gave him a minimum 10-point lead over Malas, and early counts consistently put him ahead in line with predictions. The Akel-backed independent conceded with less than 70 per cent of the vote counted but the celebrations had already started at the presidential palace some time before that, and for hours after the capital and Anastasiades’ hometown of Limassol resounded with celebrations. A giant screen was set up outside his campaign office in Nicosia where supporters gathered early in the evening. Some carried placards with photos of Disy founder and former President Glafcos Clerides, Anastasiades’ mentor.

Before Anastasiades addressed the crowds there, Disy leader Averof Neophytou told supporters: “These elections were carried out without trade-offs. We will continue with our honest efforts to reunify Cyprus. We have big visions for the future and we know there is no room for big visions in a divided country.”

Anastasiades in a short speech outside the campaign office before heading to his victory event, told supporters he wanted to repeat his assurances that he was willing to cooperate with everyone. “I will continue to operate as the president of all Cypriots,” he said. “The biggest challenge we face is reunifying our country. I will continue to work with the same determination in a bid to achieve our common goal – ending occupation and reunifying our country.”

He added that he wanted the opportunity to invite all, Greek Cypriots and Turkish Cypriots, to understand that the current state of affairs “cannot be the solution to the Cyprus problem”.

At the ‘losing camp’, in statements to the press shortly after he conceded, Malas said: “The people have spoken and their decision is respected… I know the result has disappointed you but we have to respect it. We fought an honourable battle”.

A grim-faced Andros Kyprianou, the leader of backers Akel said: “We are not satisfied with the vote but we respect the choice of the people. The fight doesn’t end here – it continues throughout next five years”.

He called on Anastasiades to convince Akel that he considers the Cyprus problem a top priority, criticised the centrist parties and said that Akel were the “political and moral winners” of the elections.

Despite the ‘protest vote’ most of the ‘floating’ electorate appear to have backed the incumbent. According to the results, Anastasiades gained 20 per cent over his first-round results of 35.5 per cent, and Malas 14 per cent on his initial 30 per cent, indicating that the former took the bulk of 34 per cent or so-called conscience votes that were up for grabs after the first round – the 25.7 per cent from Diko leader Nicolas Papadopoulos, 5.65 per cent from far-right Elam and 2.8 per cent from Citizens Alliance candidate Giorgos Lillikas.

Akel, whose candidate outright rejected any engagement with Elam during horse-trading over the past week, suggested on Sunday that seven out of ten members of Elam had voted Anastasiades. Like his rival, the latter had also attempted to keep his distance from the far-right party at least in public, but he did answer Elam with a letter when they sent him a questionnaire on his policies.

The centrist parties, Solidarity, the Greens, socialist Edek and Diko, who are seen as hardliners on the Cyprus issue offered grudging congratulations to Anastasiades on Sunday but all warned that the problems they had highlighted throughout the campaign still remained. “The people expect the president and the government to address seriously the issues that concern the country and to find solutions,” Diko said in a statement.

Ministers in high spirits as reshuffle hinted at