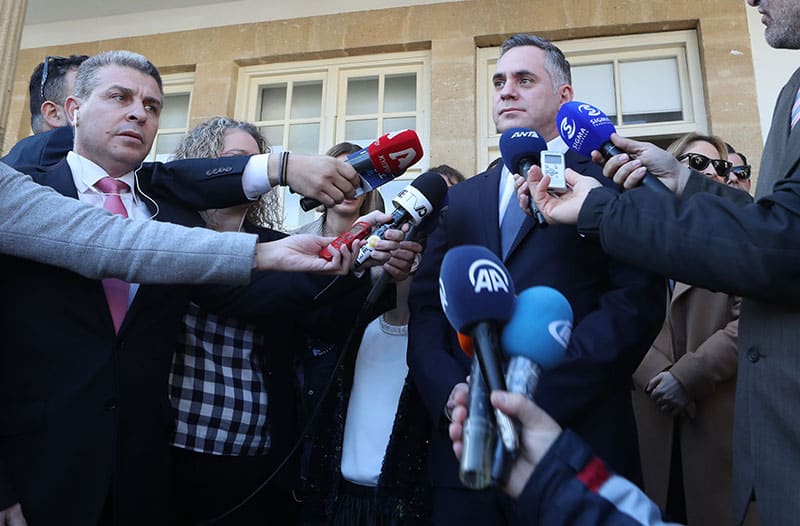 Diko's Nicolas Papadopoulos during the election's first round, which he ultimately lost

THE purge within Diko, with the ouster of over a dozen party members earlier this week, is expected to rage on as for the moment the two camps seem dead-set on a collision path. Will the internal rift cause the implosion of the party founded in 1976, or will the crisis blow over as it has on so many occasions in the past? It depends on whom you ask. But one thing is for sure: the train wreck that is now Diko won’t not come out of this unscathed.

Having failed to make it to the runoff, Diko leader Nicolas Papadopoulos subsequently blamed defectors and people who engaged in so-called strategic voting – voting for Stavros Malas in the first round to ensure Papadopoulos didn’t make it through.

Observers point out however, that the four parties supporting him – Diko, Edek, Greens, and Solidarity – had failed to garner the numbers they got in the 2016 parliamentary elections.

It looks like the anticipated expulsions by the party leadership of prominent cadres – with possibly more dismissals to follow on Monday – were phase one in the decimation process.

First on the chopping block were the leading dissidents – among whom ex-party boss Marios Garoyian and former MP and MEP Antigoni Papadopoulou – who had openly campaigned against the candidacy of Papadopoulos in the presidential elections.

Phase two is set to kick in over the coming week, when the party’s disciplinary council is expected to pick on the not-so-overt dissenters but nonetheless known to belong to the anti-Papadopoulos, pro-Garoyian faction.

On some level the dismissals are warranted; after all, the ‘rebels’ did defy the leadership and refused to toe the party line. A political party is not a kindergarten.

But what the apostates are saying is that they never got a fair shake, a chance to explain themselves. They were merely summoned to the disciplinary board, in a process reminiscent of Stalin-era show trials, where the outcome had already been decided.

Rather than be booted out, Marinos Kleanthous, a local councillor at Aglandjia, quit the party last Tuesday.

On Friday, he learned of a unanimous decision by Diko’s executive bureau to expel him.

In a statement reeking of sarcasm, Kleanthos said: “Did these people not hear that I resigned days ago? Ostensibly I was dismissed for refusing to answer the charges. When did they ever send me the charges? Their zeal to disbar is so great it appears they dismissed me even though I was no longer a member!”

And in a dig at Papadopoulos, Kleanthous added: “Someone ought to tell them that before a leader starts looking for scapegoats, he should assume his own responsibilities and engage in self-criticism.”

It’s a view shared by many: that rather than look inward Papadopoulos has, a la Hillary Clinton, sought to blame everything and everyone else for his election defeat.

But the wound inside Diko goes deeper. There are those who to this day question the legitimacy of Papadopoulos’ election as party chairman. It is said that Papadopoulos employed underhanded tactics, by trucking in a bunch of outsiders to vote in the electoral congress. In those elections, the challenger usurped the incumbent Garoyian, sowing the seeds for a still-festering vendetta.

Then, in the lead-up to the 2018 presidential elections, Papadopoulos changed the rules of the game, requesting that the executive bureau approve his presidential candidacy by acclamation, rather than through a vote.

That did not go down well with those members who had concerns with his ‘new strategy’ on the Cyprus problem – the cornerstone of Papadopoulos’ candidacy.

“Nicolas is a dictator, plain and simple,” sources close to Diko said.

“Many of us wondered how we could form an alliance with Edek, who have rejected outright the bizonal bicommunal federation as the model for a Cyprus settlement. Or with Solidarity’s Eleni Theocharous, who declared she is prepared to immolate herself in Athens’ Syntagma Square in order to achieve Cyprus’ union with Greece.”

“The developments in Diko justify our choice not to support Papadopoulos. The way he governs the party is a microcosm of how he intended to govern the state if elected president. He resorts to hate rhetoric, fosters divisiveness, and gags party members.

“It is therefore with pleasure that we saw Papadopoulos get exposed in the presidential elections,” added Lakkotrypis.

This type of language doesn’t bode well when it comes to burying the hatchet. On Friday, Alecos Tryfonides, chairman of the party’s Nicosia district committee, appealed for a truce.

Perhaps sensing the party may be self-destructing, Tryfonides proposed to the executive bureau a halt to all expulsions and punitive measures.

But his holding out an olive branch is expected to largely fall on deaf ears – although that remains to be seen in the coming week.

Other sources close to the splinter group within the party ruled out the possibility of rapprochement.

“No, there is no going back. This is the largest crisis our party has ever faced. By persecuting historical members, those who have been with the party since its establishment, Papadopoulos has split the party in two,” they asserted.

Asked what would happen in the longer-term, the same sources predicted that the parties which backed Papadopoulos’ candidacy – Edek, Solidarity, and perhaps the Greens – would seek to merge with Papadopoulos’ Diko into a single political movement.

“These smaller parties realise they have reached the end of their political cycle, so their only option is to shape-shift into a new formation. But they will fail, as they have nothing in common other than their desire for the spoils of power. This in turn will leave a vacuum to be filled by those social-democrats within Diko to coalesce into a new party.”

Maybe so. But political analyst Christoforos Christoforou says he’s seen this movie before and doesn’t believe the hype about the break-up of the so-called ‘centre’.

Christoforou cites the multiple episodes of internal strife within Diko, going back to the 1980s, and usually before and after presidential elections, and points out that the prodigal sons almost always return home.

“The list is a long and distinguished one. Look at Alexis Galanos, Alecos Michaelides, or Zacharias Koulias. Despite all the bad blood, they all eventually came back.”

According to Christoforou, the chances of Diko imploding are slim. This, he argues, is because of the very nature of the party.

“It’s no secret that Diko is the premier party for clientelism in Cyprus. There’s an expression in the Cypriot dialect that goes: ‘Kripse na perasoume’ (don’t rock the boat). Nobody wants to rock the boat and risk falling out of favour, because that would mean losing connections and cushy jobs in the public sector.”

The analyst points out, for example, how Diko is disproportionately represented in the broader public sector. Having himself served in the public sector for a number of years, Christoforou makes an educated guess that as many as 25 per cent of civil servants may be Diko card-carrying supporters.

Contrast this to Diko’s support base which, in the best of times, accounted for 15 per cent of the electorate.

“Let me give you another one. Diko has an estimated 70,000 voters, best-case scenario. Yet the number of registered party members comes to 36,000. What does that tell you?”

By comparison, Disy has an estimated 50,000 party members. And Akel has a mere 12,000 to 14,000 members, although they operate in a different way, relying heavily on affiliated or satellite organisations such as the left-leaning PEO union.

Christoforou does not think a Diko split is on the cards. Even so, he predicts the party will lose approximately 2 per cent of its strength due to the ongoing spat.

“One thing is clear. Papadopoulos is seeking to clean house now, before the party electoral congress in May, to pre-empt any challenge to him. It will backfire, but not to the extent of destroying the party I don’t think.”

Our View: Election over, time for Anastasiades to pay the piper