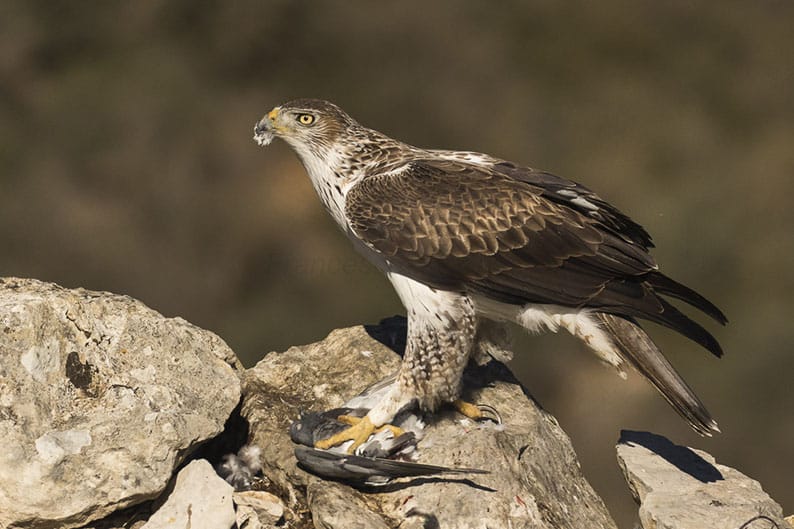 The game and fauna service said on Friday they had recently found a young Bonelli’s eagle dead, believed from poisoning, along with a number of birds of the corvids species in a field in Menogeia in the Larnaca district.

A number of rodents were also found dead close by.

“At first sight the cause of death seems to be poisoning since the birds had no visible injuries while there were also dead insects on the rodents, which is usually the first indication of poisoning,” the game and fauna services said in an announcement. The eagle was taken to the state vet services for further tests.

The Bonelli’s eagle (Aquila fasciata) is a species under threat in Cyprus.

This is the second such incident the past six months in the Larnaca district, the service said.

Last September three Black-winged Kites (Milvus migrans) were found dead from poisoning in a farming area near the village of Maroni. Close by, game fund officers had found pieces of meat and animal entrails.

The service said that birds of prey die from poison baits placed by farmers and others to kill foxes and wild dogs that attack livestock.

“Unfortunately, poisoning is one of the main causes of the decline of the griffon vulture (Gyps fulvus) population in Cyprus – poisoning was the cause of the death of seven griffons in the period 2015-2016 and one of the reasons for the disappearance of the cinereous vulture as a nesting species, while several species of birds of prey are poisoned each year by baits,” it said.

Poison baits also kill other species, it said, such as partridges, ducks, rabbits and mouflon.

It reiterated that poisoning animals and especially predators is an illegal and immoral act with multiple negative consequences to the environment.

BirdlifeCyprus said earlier in the week that during a recent bird count of the vulture population, in total and across all observer teams, they recorded 17 vultures.

“It may be that we missed a few individuals but even so, 17-20 vultures is a woefully low number. It is less than one tenth of the size we would expect a healthy Cyprus vulture population to be,” the organisation said. “As long as the threats of poisoning and persecution continue, the future appears bleak for the vultures of Cyprus.”

The service urged the public to notify authorities when coming across dead wildlife.

Farmers call for halt to potatoes from the north